The Hotness of Young Stalin

September 04, 2012
Two nights in a row, when I was out drinking with comrades, someone has started a conversation about the hotness of young Stalin.  Is this simply a coincidence or is there something in the leftist networking world (i.e. facebook, from which I am still successfully abstaining) I've missed?  For it seems rather odd, in the context of the default and generally uncritical anti-Stalinism that affects the western left, that people would be exchanging pictures of young Stalin.

Apparently, now people cannot avoid the fact of Stalin's 20-30 something hotness.  I mean, even if you're a Trotskyist you cannot deny that young Stalin was hotter and hipper than young Trotsky––who looked like, let's be clear, a maladjusted basement nerd trying hard to be cool.  Hell, I would like to say that young Stalin was possibly hotter than Lenin but I worry that this would be tantamount to revisionism!  Whatever the case, we cannot deny the uber-hotness of the youthful Stalin in the glory days of the Bolshevik revolution.

Look at that picture: transpose the young Stalin to any contemporary hipster bar and he would be outclassing the other hipsters with his hip good looks.  Only he would also be holding up trains and robbing banks for the revolution, which would make him cooler than that guy who is trying to pick you up (and only wishes he was as hot and hip as young Stalin) with his knowledge of a bunch of obscure indie bands.  Or maybe if young Stalin was alive today, he would seduce you with his indie band knowledge one night, and rob a bank for the revolution the next night––he just looks like that kind of hipster, doesn't he?

And they try to tell us that communists have no style––that we're all troglodytes who resist style, unattractive because of our rejection of bourgeois attractiveness.  Well, yeah, that's probably the case for most of us––and yeah, fuck bourgeois notions of attractiveness––but when you look at young Stalin, irregardless of potential anti-"stalinism" [note to new readers: I scare-quote "stalinism" because I don't believe there is any such thing, really, as "stalinism––see the above link for clarification], you have to recognize the style and attractiveness.

But seriously: how did such a hot hipster, who we all wish was our friend because of his suave coolness, transform into the iconic senior Stalin of the cold war?  The transformation is jarring: it's like comparing the character of "Angel" in the first season of Buffy the Vampire Slayer with how he ends up looking in the last season of Angel, without any of the seasons between the aging, and wondering why the fuck he developed a football neck.  (Yes, I know I'm showing my age, but I also suspect that a significant portion of my readership knows what I mean.)  How the hell did David Boeranaz age in such a jocky and annoying fashion?––this was the question many of us asked, unaware that the question was already solved, as all questions are solved, in the history of communism: the young-to-old Stalin equation.

Stalin proves by his very development, and with iron fisted "stalinist" precision, that slender young celebrity male hipsters will grow up to be thick necked jocky looking fellows.  This is a hipster law of history.  I mean, compare the profiles of younger and older Stalin: 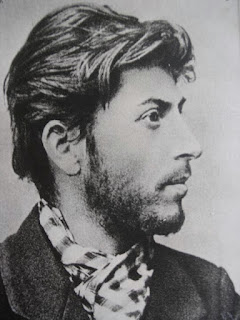 Could this even be the same person?  It looks as if a hipster was replaced by an Amerikan football player––and even the hair isn't as cool.  The only thing senior Stalin has going for him, when it comes to hipsterism, is his moustache… and I think he might be trying too hard.  And is it just me or did his chin somehow shrink?  Obviously the split in the Third International and fascism is to blame: the hipster had to grow up and try to fill the shoes of Lenin while trying to make sense of the destiny of actually existing socialism.

Young Stalin and senior Stalin are different people––they even have different theme songs.  While senior Stalin gets to march along to this intense theme, the youthful and more frivolous Stalin gets to dance the night away to this euro-hit.  Come on, you know this is awesome: I bet all of you, whether you critically like or uncritically dislike Stalin, want to see him dance…


[Since over 5000 people clicked on this post today for some reason, I will again attempt to solicit funding my reminding the interested, generous, and economically stable readers that they can donate to this blog!]