September 11, 2012
The always excellent Kersplebedeb Press––the independent leftwing publisher that has brought us such classics as Butch Lee's Night Vision, Kevin "Rashid" Johnson's Defying the Tomb, and [in collaboration with PM Press] the ongoing documentary history of the Red Army Faction––has recently launched "the Kalikot Book Series" with Zak Cope's Divided World Divided Class as its first book.  Today, the website of the Kalikot Book Series was launched and I urge all of my readers to visit this site and, if financially able, purchase the first book. 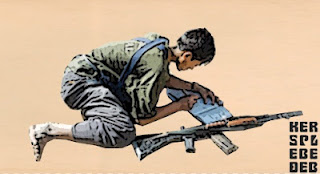 The Kalikot Book Series is devoted to publishing books from the anti-eurocentric marxist tradition, many of which will be maoist or maoist-inspired from a variety of voices and perspectives throughout the world.  "These are books," the website proclaims, "that seek to serve as interventions into numerous complicated problems faced by the contemporary revolutionary left and to not only educate, but to help forge a revolutionary movement capable of the tasks before it."

The book that is launching the series, Divided World Divided Class, is perhaps an appropriate starting point for this series in that it attempts to reestablish, against a general eurocentric left zeitgeist, the political economic efficacy of Lenin's concept of the theory of the labour aristocracy.  In plan to review this book in an upcoming post, so if you're leery about purchasing it outright hopefully my review will pique your interest.  But if you're a sucker for awesome cover design, then once you take a look at the cover, and have the money to spare, I'm sure you will rush over to Kersplebedeb and order it immediately!  (Also, the fact that both J. Sakai and Mobo Gao have positively reviewed the book should be an encouragement.)

I look forward to the other exciting books the series will be publishing.

Now… if only I could get my own books published…