September 02, 2012
"To thus free women from their biology would be to threaten the social unit that is organized around biological reproduction and the subjection of women to their biological destiny, the family."

It is rather sad that the recent death of Shulamith Firestone, author of one of the foundational feminist texts The Dialectic of Sex, wasn't treated with the significance it deserved.  Indeed, although she was found dead on August 28th, I didn't hear about her death until yesterday and I'm sure that there are many others, many leftists who have been inspired in some small way by her contribution to radical feminist thought, who are also unaware that she is dead.  The tragedy is that hordes of internet leftists will eulogize the death of Jack Layton, a social democrat turned liberal (and on the anniversary of Layton's death, five days before Firestone dies, waste a lot of internet space marking that anniversary) but largely ignore the death of a woman who actually was a revolutionary thinker and whose contribution to revolutionary thought was more significant than the contributions of this dead liberal.  Firestone's death was drained of its significance, even though her life and what she contributed this life will always remain significant; Layton's death was inflated with a significance it didn't deserve… Hopefully, revolutionary history will set the record straight: it is better to eulogize the passing of a flawed revolutionary than a counter-revolutionary flawed by his commitment to left liberalism. 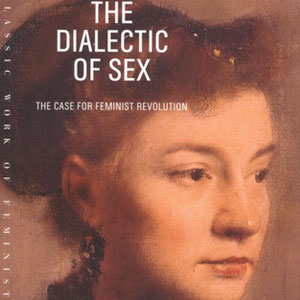 Firestone only wrote one book on feminist theory before, coping with schizophrenia, she was forced to withdraw from the public sphere and live a private and insular life.  In that period of isolation, thirty years after The Dialectic of Sex, she produced only one more book––and this one about her experience with schizophrenia, but that was all.  Still, most theorists have never succeeded in writing, despite many books, something that was as ground-breaking, influential, and important as Firestone's first book, written when she was only twenty-five.  Even if one does not agree with The Dialectic of Sex, one cannot deny its importance, originality, influence, eminent readability… all of those things that most contemporary theoretical works lack in that they are only self-important, unoriginal (or at the very least original in such a marginal manner that it doesn't matter), barely influential, or extremely opaque.

I myself do not agree with everything in The Dialectic of Sex.  For one thing, I find that Firestone's replacement of a crude understanding of economic class with an equally crude category of "sex-class" theoretically unsustainable––here, I'm in agreement with the analysis of Anuradha Gandhy (Comrade "Avanti"), one of the main progenitors of "proletarian feminism", where Firestone and those who follow Firestone's analysis are critiqued for "[m]aking the contradiction between men and women… the principle contradiction [and] thereby justifying separatism."  I also find the chapter on race in The Dialectic of Sex extremely problematic, to say the least, in that it attempts to classify racism as a distorted form of sexism in the same way that simplistic marxist theories have attempted to dismiss racism as some aberrant ideology foisted upon the masses by a ruling class conspiracy.  Then there is her weird endorsement of pseudo-leftist futurism and thus categories such as "cosmic consciousness" and "instant universal communication" which appears at the end of the book––probably the result of some sort of late 1960s hippy influence that, we know by now, hampered a lot of social theory produced in the United States in the 1960s and 1970s.  Finally there is the fact she holds up psycho-sexual categories as materialist… but this is nothing entirely strange, because the Frankfurt School and Deleuze and Guattari (as well as lesser lights) have also plunged into this theoretical rabbit hole.

Despite these problems, I cannot dismiss the importance and influence of this book for revolutionary theory; Firestone's theoretical errors are more worthwhile than the banal successes of what often passes for radical theory these days!  What is most important and relevant, after all, is the fact that this was one of the first books that attempted to ground gender oppression in material relations.  Rather than just accept patriarchy as a fact, and write about this fact as many of her contemporary feminists were doing at the time, Firestone correctly recognized that this fact needed to be treated as historically contingent and, as such, demystified.  And rather than just assume that patriarchy was an ideology that the ruling classes used to split the working class, she attempted to use the historical materialist method to locate its emergence in concrete history.

Firestone's demystification of patriarchy was both elegant and contained a political praxis: 1) pregnancy, and the physical weakness caused by child birth, caused women to eventually be relegated to the private sphere (for what else could they do in nine months when they were vulnerable); 2) this relegation allowed for the emergence of patriarchy since men ended up controlling the public sphere, which would eventually mean the state; 3) an ideology of male supremacy emerged from this division of public/private [and here we have to note that she took this division from Engels' theories of the family]; 4) women's control of reproduction, which would include getting rid of biological reproduction as well as biological families (Firestone advocated state/communal families), was a revolutionary demand.

As an aside, in the past nine months my partner reread The Dialectic of Sex and––because she was dealing with pregnancy and how it affected her body and not the body of me, her partner––found that it resonated with her own experience.  There is something viscerally material about Firestone's understanding of the importance of biological reproduction for the emergence of patriarchy.  And though we now have to argue that patriarchy has become an ideology that no longer relies, primarily, on the material fact of reproduction, we cannot deny its importance: the fact that society has policed reproduction, that it has even policed what counts as female and male according to an ideology of reproduction, has a lot to do with a maintenance of gender roles according to the ideology of a biological family that must have emerged at one point due to material facts and that must be superseded, and new concepts of gender and sex developed, if patriarchy is finally to be relegated to the dismal past.

Nor can we deny that Firestone's analysis of reproduction and patriarchy was important for marxist-feminist theory as a whole.  Take, for example, the concept of "reproductive labour" that was theorized by Italian marxist-feminists in 1972, one of the theoretical watersheds of marxist analyses of patriarchy, and we cannot help but recognize Firestone's possible influence.  [Here I defer to regular commenter Xtina, however, to verify whether this influence existed.  Firestone's analysis came first, but it is fallacious to simply assume that chronological order is causal.]  I recognize that, in the article I linked and cited above, Anuradha Gandhy writes that "[s]ocialist feminists by emphasizing reproduction are underplaying the importance of the role of women in social production… the crucial question is that without women having control over the means of production [rather than simply the means of reproduction, i.e. just their bodies or the private sphere] and over the means of producing necessities and wealth how can the subordination of women ever end?"  But I also recognize that, whether or not one agrees with Firestone's political solution to patriarchy, we cannot deny that the sphere of reproduction's existence is important for marxists to understand and interrogate as, at the very least, as part of what permits gender and sex oppression.

One only needs to look at Hisila Yami's People's War and Women's Liberation to grasp that Firestone's analysis is important.  Yami (Comrade "Parvati") was writing a piece of proletarian feminism that was largely in agreement with the position held by Gandhy––and was in agreement that the feminisms, even the most radical feminisms, produced in the first world lacked the proper ingredients for women's liberation––but she also agreed that the material fact of reproduction allowed patriarchal social relations to persist.  At several points, for example, she spoke of how the pregnancy was a serious problem for women cadre––removing them from the field, because it was extremely difficult to lead an armed revolutionary squad if one was pregnant, and allowing men to claim positions of leadership.

We need to recognize that Shulamith Firestone's analysis is important because, whatever flaws some of us might find in the pages of The Dialectic of Sex, it haunts revolutionary theory.  And it will continue to haunt revolutionary theory until the problem of reproduction, even if it less important than women controlling production, is solved.  For what revolutionary movement can survive if some cadre are forced to do most of the childcare, housework, sometimes even being forced biologically into the roles of primary caregiver simply because they possess wombs?  We know now that access to all forms of birth control have allowed many of our comrades to possess more autonomy than they possessed before this access existed.  We should recognize, especially now if we are also trying to overthrow the biological basis of gender and sex, that annihilating the sphere of biological reproduction will also annihilate the biological binary of male/female.  Does this mean we must focus primarily on Firestone's notion of "sex-class"?  No, I believe that it does not––but it does mean that we have to take her analysis in toto very seriously, as part of the general historical materialist tradition.  And if we have not rejected other theorists due to deficient aspects of their theory (we shouldn't, for example, reject Adorno and Horkheimer's analysis of the European enlightenment simply because it often lapsed into idealism and mystified historical categories), then there is obvious no reason to dismiss The Dialectic of Sex.

And so we must salute Firestone and recognize her passing as a death worth mourning, a death that was significant.  Revolutionary theory would be impoverished without her insights, many of which are still worth analyzing and grasping even if we do not agree with the way she understood the ultimate terms of class struggle.  I know that I learned a lot from Firestone (and in the past [almost] nine months she has constantly been at the back of my mind due to my partner's experience with pregnancy and, by witnessing this experience, the recognition of a certain privilege I possess when it comes to the realm of reproduction), and I know other radicals have learned from her as well.