The Problem with "International" Parties

September 01, 2012
Although Marx and Engels argued that the proletariat was an international class that did not have a specific country, Lenin and those who follow the Leninist development of marxism have generally understood that this fact of internationalism is also mediated by the fact that the proletariat cannot escape its entrenchment in particular nations.  That is, while the proletariat as a whole should share the common and interest of uniting across national divisions and overthrowing world capitalism, this same proletariat is spread out amongst various social contexts, and thus has to deal with the concrete realities of how class struggle unfolds within these different contexts.  Unfortunately, the history of revolution is rife with attempts to cling to an idealist understanding of the international proletariat that ignores the fact that the proletariat struggling in one nation might need to structure its class struggle in a way that manifests the universal similarities of revolution in different concrete particularities.

In the past few years I have become more and more annoyed by the tendency of certain organizations to base themselves on some abstract notion of internationalism and declare "international" parties that, due to the reality of differences between concrete contexts, end up being nothing more than a false internationalism generated by the concrete concerns of the nation that produced these international organizations in the first place.  Take, for example, the Socialist Workers Party (SWP): based in Britain, it attempts to produce an International Socialist party that does little more than follow the directives of its UK headquarters even though these headquarters are incapable of understanding the class struggle elsewhere.  Why?  Because it's a bloody British party that lacks an organic connection with revolutionary movements outside of its primary country; it imposes directives possibly gleaned from its social context on other places in the name of internationalism and proletarian unity; it confuses the particular with the universal, the national with the international.

To be fair, my understanding of the SWP is primarily based on its anachronistic existence as an imported socialism that has little to do with actually existing class struggle in my social context.  For all I know, it's a vital force in its country of origin and is simply (and erroneously) attempting to transpose this vitalness to contexts where it did not emerge organically.  My point, then, is not about the SWP but about this tendency to treat global class struggle as homogenous, to confuse the universal fact of class struggle with its concrete and particular articulations, and to imagine that you can start a party in one country and then decide, for some idiotic reason, that it's global and that everyone should take directions from London, or New York, or wherever.  This didn't really work when the Soviet Union tried it, and its reason for such an attempt was far more legitimate (because it was the first socialist revolution in the world) than the reasons given by these contemporary groups that have never led, or even come close to leading, an actual revolution.  Nor did the Soviet Union confuse an international organization of parties with its own party.

But now, with the spread of internet leftism, there are innumerable grouplets that call themselves "international parties" whose international status is around forty people on the internet and whose party status is… doing what exactly?  A reading group?  Forty or fifty people talking online, none of whom are embedded in the class struggles of their concrete circumstances, do not constitute a party.  And they're an insult to internationalism because they ignore the precisely what a robust internationalism deems necessary: the recognition of proletarian struggles in different national contexts.  If you're all getting together online to define yourself as an international party outside of space and time, then you're ignoring the embedded fact of international struggle.  Oh well!  Screw history and what it means to build a fighting party in a specific context!  We're going to build ourselves an online party that imagines it can be called a party when it has no understanding of how the universal fact of class struggle manifests within different social contexts and how the movements in these social contexts could give a fuck about our internet party!

The masses need revolution, revolutionaries need a party, and parties need an international organization.  And just as the masses by themselves are not the same as a party, parties by themselves are not the same as an international… But still you have these organizations confusing the categories and setting themselves up as some bullshit international party even when they're only forty people living predominantly in Europe or upper North America who know shit about the class struggles in their own contexts.  Even if they have under fifty people professing membership, they imagine that they are the masses, the party, and the international all in a single organization!  If only revolutionary struggle could be so convenient. 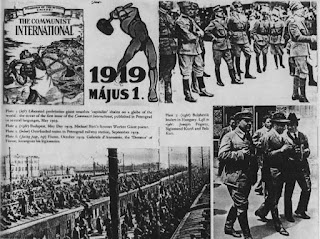 Generally, with honourable exception, this kind of pseudo-internationalism possesses a eurocentric chauvinism.  Started at the centres of capitalism, these organizations are most often dedicated to that corollary principle of the so-called "permanent revolution" that: a) the proletariat, being international, can only have a revolution altogether (hence the need for an international party); b) since the "most developed" proletariat are obviously at the centres of capitalism, the movements at the centres representing this developed proletariat are the most advanced; c) revolutionary movements at the peripheries, since they are not properly "proletarian", must hold the revolution in permanence until the contradictions of the capitalist mode of production are developed in their own specific context and thus follow the directives of the proletarian movements at the centre.  What we have here, under the auspices of international parties, is a reflection of the imperialist ideology that the peripheries need to "catch up" with the centres even though the latter is only economically "advanced" because of its parasitical dependency on the former.  Nor does there seem to be very much recognition that this imperialist relationship has always affected the workers movement, even though Lenin had a lot to say about this when he spoke of labour aristocracies.

Thus, these international parties violate internationalism in that they impose an analysis of a concrete national context upon an international context where they have no organic basis––where they are only an importation––and thus are unable to produce a viable social investigation of class in these spaces.  Moreover, they often tend to echo the imperialist relationship of centre-periphery.  And now, with the onslaught of internet activism [of which, admittedly, this blog is often guilty], you have the ludicrous emergence of parties who dare to call themselves revolutionary parties even though they're nothing more than forty or fifty people who meet on internet forums and believe that chatting, blogging, posting, commenting, etc. as a tiny internet group is somehow identical to class revolution.

The revolution would be better served if people went back to finding ways of building parties organically wedded to the class struggles of their concrete contexts, beginning within the borders of nations and then moving outwards to connect with international lines, rather than just aligning themselves with a party from another country that also imagines itself to be an international tendency when, in reality, it is a national tendency that attempts to impose itself internationally.  For the only parties that have led successful revolutions have been those parties that have emerged from the class struggles of their particular contexts; this fact, more than anything else, should lead us to abandon this bizarre notion of international parties and return to the aforementioned formula: the masses need revolutions, revolutionaries need parties, and parties need an international.