On Movement to Movement Tailing

September 27, 2012
A year has passed since the #occupy movement emerged in upper North America and was avidly embraced by those leftists who hungered for revolution but were unwilling to accept that there might be a science of revolution learned from the victories and defeats of the past.  Obsessed with the new, and preferring to tail what would turn out to be a largely (with honourable exception) petty-bourgeois movement, the apparition of #occupy was met with numerous uncritical statements about revolution, how it would change everything… some even went so far as to imagine it was the most important "revolutionary" movement in the world.

Well, large sectors of the left at the centres of capitalism have always been myopic; we tend to get caught up in our social movements––or movements that closely resemble our movements––and generally ignore, sometimes even dismiss, actually existing revolution that is happening elsewhere in the world.  Hence all the excitement over the so-called "Arab Spring" and the blank looks about the peoples war in India.  As one of my comrades has put it, the meter of a good anti-imperialist leftist should be what they say and think about ongoing peoples wars; if they know nothing, if they only think about the rest of the world when there are rebellious moments elsewhere that look like massive anti-globalization demos, then there might be a problem with their ideological commitment. [Note: I am not saying that all leftists who whole-heartedly embraced these movementist moments were ignorant or unsupportive of peoples wars––because some were and are––but only that this is a general tendency.]

The thing is, you'd figure that after watching this movements go nowhere time and time again––that is, to see that they have never even come close to a revolutionary moment in any way, shape, or form––one would think that the mainstream left at the centres of capitalism would stop declaring, over and over again, "the revolution is coming" each and every time there is a manifestation of the masses' justifiable anger emerges in a disorganized, semi-spontaneous, and incoherent manner.  Not that we shouldn't get involved in these movements and treat them as potential spaces for organizing; we just need to stop seeing them as revolutionary spaces by themselves, be aware of maybe their class composition and not pretend they are things they are not, and definitely not run around from one eruption to the next like the tailists that we are who just hope the revolution will magically happen without any work beyond, you know, maybe organizing some marches and demos and the like. 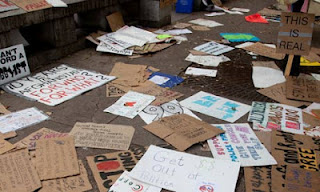 A year after #occupy, however, and some people still want to imagine it's a viable movement.  Despite the fact that it has gone nowhere, that it definitely didn't amount to very much when it was imported to my country, you still have folks like Jodi Dean who apparently love to tail these kinds of movements and treat them as possibilities for communism.  I mean, regardless of #occupy's evaporation, Dean is still writing papers about how revolutionary it is even though its failure should be pretty obvious to anyone capable of empirical observation.  Why this frantic obsession to cling to a now moribund movement that was never all that revolutionary, that didn't change the alignment of power in the US and was incapable of doing so, and that was only useful insofar as it might produce the seeds of revolutionary consciousness amongst a new generation and perhaps a new and vital revolutionary assemblage?

Up here in Canada we already moved on to the next "the revolution is coming" moment.  It didn't take us very long; #occupy died pretty quickly after its importation––it didn't last the fall of 2011.  But in February 2012, we got the Quebec Student strike, a moment of mass rebellion that made our version of #occupy look like camp out.  And so those who were wont to tail the next neat movement quickly forgot about #occupy and moved on to proclaiming this student strike as the possible revolution.  Innumerable activists in my province [Ontario] would go on solidarity trips to Quebec [a good thing] and come back speaking of the strike in utopian terms [not really a good thing].  When I would suggest to some of these over-excited people that maybe they should read some of the analyses produced by the Mouvement Etudiant Revolutionnaire, the PCR-RCP affiliated student organization that was heavily involved in the strike but saw it also as a space to organize for something beyond the strike rather than an end in itself, I was often met with confusion.  No no this won't do, was the attitude, I don't want to hear about a revolutionary organization in the student strike, even if it was involved in some of the most direct action of the strike and has been pushing demands that spill over the limits of the strike, I just want to go there as an observer, make my own assessments, and believe the revolution is on its way.

Except the student strike evaporated with the PQ election, the more radical demands that were beginning to appear were stifled, and the revolution did not come to Quebec as some thought it would.  We must wonder, then, why many Ontario tourists of the Quebec student strike are now actively trying to organize basically the same thing here, caught up in the limited logic of this strike, rather than spend their energy attempting to organize something more revolutionary.  Why not take the lessons that we should have learned from the student strike, or from every one of these types of rebellions, and work to build something thoroughly revolutionary and sustainable?  A difficult question, maybe, because it demands that we break from our laissez-faire participation in activism, in doing and thinking the same thing when it is clear this thing hasn't ever worked, in drifting from one movement to the next, in never possessing any real anti-capitalist commitment beyond a theoretical level.