May 25, 2012
Samir Amin once remarked that people who want to change society generally have better ideas than people who want to preserve the status quo.  And the ideas of those whose way of thinking is the product of pre-capitalist values are even worse: whereas liberal ideas––being the unremarkable product of "common sense" capitalist ideology––is banal, conservative ideas––the cobbled together product of the ideological sensibility of pass modes of production––is simply backwards.  Liberal intellectuals, then, are boring, predictable, uncreative, commonplace; conservative intellectuals don't really exist because the term conservative intellectual is an oxy-moron.

I was reminded of this redundancy when I encountered an article about a protest to support the Quebec student strike––interesting mainly because it wasted a paragraph joking about the acronym of a group of which I'm a member––in one of this country's most well-known conservative newspapers.  The columnist, a smarmy conservative convinced of an intelligence he doesn't really possess, insulted the student strike and those who would support it, referring to them as "wannabe revolutionaries".  Hilarious, I thought, coming from a "wannabe" intellectual.  I mean, really, anyone who thinks they possess an ounce of critical thinking and writes for the National Post, simply replicating a way of seeing the world that was reflective of the dominant values of 1955, should stop thinking their opinions matter and realize that, regardless of what they might believe, they're actually quite stupid.

Take, for example, the "intellectuals" of Galileo's time.  I'm sure they thought they were intelligent and clever for rejecting heliocentrism; now we realize that they were idiots.  This type of "intellectual" became even more idiotic over a century later, when heliocentrism had become a normative concept and there were still some self-proclaimed "intellectuals" still arguing that it was wrong and giving all sorts of pseudo-intellectual arguments as to why this was so.  Hence my claim that conservative intellectual is an oxy-moron. 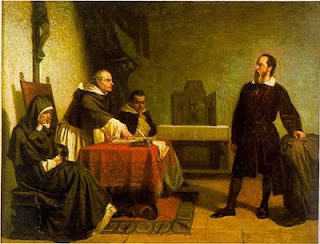 People who adhere to outdated values, and try to argue for a way of thinking that belongs in a bygone era, should either realize that they are inveterate fools or just get in a time machine and go back to the middle ages.  I'm sure that the author of the above article, as well as every author who writes for the National Post, would be quite happy to live in feudal England, or at least the American south at the height of slavery, just as long as they were nobles or slave-owners respectively.

Of course, these "wannabe" intellectuals often do possess some awareness that their claim to intellectualism is a farce; this is why even university educated conservatives will complain, without any awareness of possible hypocrisy, about some "intellectual elite" that is getting in the way of their mom-and-apple-pie way of seeing the world.  "It's those damn effeminate intellectuals who are ruining the free world," they howl when their substandard ideas are challenged, "So let's get back to that time when men were men and women were women and we could lynch minorities!"  They turn ignorance into a value, critical thinking into a vice, and try to pass off stupidity as cleverness.  Then they get a job at some right-wing rag of a newspaper, the quintessential definition of the reptile press, and demand to be treated as an intellectual even though they pour out scorn on anyone who is more worthy of the title.

Even worse are the followers of these pseudo-intellectuals.  Every time a conservative columnist writes about his pet issue, he (for it is usually a he, Ann Coulters and Christie Blatchfords notwithstanding) is celebrated by a chorus of privileged troglodytes who are convinced of the brilliance of their own backwards ideas––which are not really their own ideas since they come from a reactionary section of the ruling class.

All conservatives who like to think of themselves as intellectual are frauds.  One one hand they disdain anyone whose ideas have any real worth––and go out of their way to belittle supposed "intellectual elites"––and on the other hand they are guilty of the worst intellectual elitism, though they are far from intelligent, in that they use their medieval cleverness to mock those who understand the world better than they ever could.