On the Class Consciousness of the Intelligentsia

May 19, 2012
Recently, due to conversations in both internet forums and concrete life, I have been thinking again about the class position of the so-called intelligentsia––academics, university students, artists, and other "mental labourers"––especially in the context of the centres of capitalism.  While I find the somewhat pernicious trend of leftwing anti-intellectualism extremely problematic, I have also found the inverse intellectual resignation troublesome.  It is one thing to argue that the intellectual life should be opened up to those who lack the privilege of access, but it is quite another to argue for the primacy of the privileged leftwing intellectual––especially when these intellectuals often defect to the bourgeois camp, or at the very least show no interest in agitating for revolution, time and time again.

This topic concerns me because, obviously, I currently belong to this class of intellectual workers: I sell my labour in a casualized academic environment while working towards the dream of (someday and somehow) getting a secure job teaching in academia and publishing leftwing articles and books.  I hold no illusions, regardless of my desire, about the efficacy this line of work in an environment that is becoming increasingly casualized… but neither do I hold any of the illusions, which are now all-too-prevalent, that I am also part of a some radical left vanguard by virtue of being trained as an intellectual.

The thing is, there is a reading of Lenin's theory of the vanguard that does hold that leftwing intellectuals will be the ones who primarily compose the core of the party of the advanced guard.  Even worse, there are theorists who even reject Leninism who still argue that the students and intelligentsia are more advanced than workers, especially at the centres of capitalism, because their position in this capitalist context provides them with the necessary tools to understand capitalism and thus lead any revolutionary movement.  There is, after all, an interpretation of Marcuse's writing on advanced capitalism that argues for the recognition of some nebulous class of students as the new revolutionary subject.

And while it is true that students in university are afforded the privilege, if they wish, to possibly make a career out of studying revolutionary theory, this privilege must be recognized primarily as a privilege and not as the qualification for revolutionary leadership.  This privilege increases the longer they are able to remain in academia––crystallizing when they finish graduate school, consummated if they ever achieve tenure.  We must look at those students who, regardless of their desire to learn, are never able to reach university due to their concrete class circumstances.  Or those students who drop out long before reaching graduate school.  And finally those students who are able to remain long enough to make the transition from student to academic.  How do they see themselves as a class, and what is the nature of their political praxis regardless of what they might theoretically claim?  No matter how it might look in a paper designed for a journal, concrete revolutionary praxis most often diminishes from undergraduate to graduate, often evaporating when the student transitions into "recognized" academic.

Here, at the centres of capitalism, leftwing intellectuals like to complain about "petty-bourgeois" shop-keepers, and how they want to be big bourgeois, but the truth is that these intellectuals are generally inclined towards a more petty-bourgeois consciousness than most of the shop-keepers they disdain.  For the small businesses at the centres of capitalism are most often survival attempts on the part of immigrants––many of which will fail, some of which will become little more than family sustenance ventures––run by people who would have otherwise wanted to become intellectuals… Indeed, some of these "petty-bourgeois" immigrants desired to become unionized factory workers only to discover that chauvinism and/or settlerism barred them from this sort of employment.

But these leftwing intellectuals (a classification to which I belong), despite what they might write in an article, are easily bought out.  Allow them to publish their books, afford them liberal free speech, even grant some of them tenure… All-in-all, a better life than the supposedly petty-bourgeois shop-keepers who are consistently frustrated with their attempts to survive as entrepreneurs in a society that treats them as foreign interlopers.  And even if it is true that the immigrant small-business owners whose stores are run by their families dream of being big bourgeois, it is also true that the leftwing intellectuals dream of tenure, prestige, publication deals, and massive offices.

One needs no clearer demonstration of the petty-bourgeois consciousness of self-proclaimed left intellectuals than a labour disruption at the heart of academia: here is a moment of social investigation that reveals what it means to be left in form and right in essence.  Around four years ago, I was a proud participant in a strike composed and maintained by university workers (the analysis of which, split into four parts, can be found here, here, here and here).  And though I believe that unionized workers most often form a part of the labour aristocracy––though they are now, thanks to austerity measures, becoming reproletarianized––my experience in this context taught me that the petty-bourgeois consciousness of academics is even more entrenched than the petty-bourgeois consciousness of trade-unionism at the heart of global capitalism. 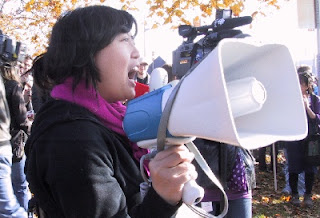 Although we are living in a period where academic work is becoming casualized, and the vast majority of university labour is performed by contingent graduate student and contract labour, getting academics to recognize that they were being proletarianized, that they were workers, was like pulling proverbial teeth.  Many intellectuals who saw themselves as either marxist or anticapitalist, and whose work focused on critiquing the current nightmare of capitalism, resisted the politics of a strike where their labour was being devalued––many refused to recognize that they produced the value of the university, instead arguing for the need to be respectable because academics are supposed to be respectable.  Or maybe the strike would harm their grants.  Or maybe a long strike would prevent them from finishing their dissertations.  Or maybe it would adversely affect their ability to apply for real (meaning tenured) jobs.  Or maybe they just didn't want to be classified as similar to other workers––the hoi-polloi plebeians in the wider world of workers.  Hey, "it's cold out there" (as one self-professed left university worker complained at a general membership meeting during the aforementioned strike), so why can't we get back to work and be good little intellectuals?  Unfortunately, the answer to this question, though unspoken at the time, was in agreement: the strike eventually cannibalized itself––the intelligentsia's desire to sell-out soon outweighed its earlier desire to be recognized as a significant work force.

Hell, it's almost humorous: if the trade unions at the centres of capitalism are bought out by super-profits, and thus generally petty-bourgeois, you have to be even more petty-bourgeois to refuse even trade union consciousness!  A union connected to the labour of the intelligentsia goes on strike and large swathes of this intelligentsia resist striking, fight tooth-and-nail against the radicality in said strike, and then complain that the people who wanted to do the minimum of strike work are "ultra-leftists" while pushing for conciliation with the employer… This is one elite cut above being bought out by super-profits; this is what it means to be classified as intelligentsia at the centres of capitalism.

And the ultra-radicals of the intelligenstia left have a ready-made excuse for why their petty-bourgeois consciousness is somehow superior to the petty-bourgeois consciousness of trade unionism.  Unions are bought out; the proletariat is racialized, colonized, in the third world!  Meaning, in this context, a convenient excuse for accepting a larger level of pacification.  Is it any wonder, then, that third-worldism is phenomenon of first world intellectuals?  If we can think of a theory that can defend our unwillingness to actually be active, we can justify our adherence to a doctrine of pseudo-revolutionary inactivity.  "The working classes at the centres of capitalism are all petty-bourgeois but I'm not because I'm a vanguardish intellectual!"  One would expect, however, that if the entire working class in a given region was deproletarianized, the intelligentsia, who were never proletarian to begin with, would be in an even more parasitic social position.

Whatever the case, at the centres of capitalism, the intelligentsia, though sometimes drawn towards leftist (or leftish) ideas, are not the revolutionary class in practice.  While it is true that academic privilege and the intellectual safety of academia often permits access to revolutionary theory and debate, it is also a context that promotes a gap between theory and practice.  If the militancy of the working classes, lacking the ideological unity that can be found in a revolutionary organization, default-expresses itself according to the ideology of the ruling classes (i.e. reformism, social democracy, etc.), the intellectual who thinks of their social vocation as being an intellectual is far below that level of consciousness when it comes to revolutionary practice.

The separation between the mental and the physical, that old division of labour, is sometimes even given leftist justification: "my role is to think and write books for the movement; I don't have time to organize or take to the streets!"  And so the leftist intellectual is also drawn to a default practice of reformism and social democracy, but one divorced from even the marginal amount of militancy.  Better yet, the intellectual can think up sophistic arguments as to why the practice of reformism is somehow "revolutionary" and why even the most banal forms of "illegal" militancy are "counter-revolutionary".  (Take, for example, this article about the G20 written by people, mainly students and intellectuals who are also ironically "anti-intellectual" despite being guilty of the worst excesses of intellectualism, where militancy on the part of the people is treated as identical to the actions of the police.  Nor is this analysis isolated: large portions of the intelligentsia left feel that militancy is wrong, that anyone who engages in these activities is an agent provocateur, and that we should have peaceful marches with the proper permits and such.)  Clever sounding arguments, to be sure, but produced by people whose main reason for rejecting militancy and clinging to reformist opportunism is to live a safe and respectable life… And this type of consciousness, produced by the social being of a heterogeneous intellectual class, militates against a revolutionary consciousness––it is a problem all of us who still belong, in some way, to this class must struggle against.