[The following document is a call-out for a revolutionary youth conference, to be held in October 2012, sponsored by the Revolutionary Communist Party of Canada (PCR-RCP).]

From the Arab Spring, to the UK riots and the #Occupy movements in North America, exploited workers and oppressed masses continue taking the streets. To tackle the economic crisis they created, capitalists and their lackey governments ruthlessly attack and further impoverish the majority of working and poor people. While this minority of the rich and powerful—intent on protecting their obscene profits and lavish lifestyle—gorges itself on the exploitation and immiseration of workers, the vast majority of the world’s population must toil for the most basic necessities to sustain life. “Where there is oppression,” said Mao Zedong, “there is resistance.”
At the forefront of these popular struggles, youth from the proletariat and popular classes are rising up against the authority of the ruling regimes. Radicalized students are leaving their classrooms to struggle with the masses in the streets.It is not difficult to see why. In this latest “age of austerity,” young people from these social strata—who are poor, recent immigrants, undocumented migrants, racialized, and especially those belonging to the First Nations—face further deterioration of their life conditions. In an aggressively imperialist state like Canada, unemployment for those between 15 to 24 years of age is over 17%; that’s more than double the national unemployment rate! Poor, unemployed and underemployed youth—a significant portion of what Karl Marx called the “reserve army of labour”—are criminalized and incarcerated at alarming rates. On or off the job, our quality of life is miserable. Riots and mass rebellions—triggered by racist pig murders and brutal state repression—are the expression of justified rage against this exploitative and crisis-ridden capitalist system. But to give this degenerating system the shove it deserves, we must collectively organize our rage and arm ourselves with revolutionary ideology and politics. 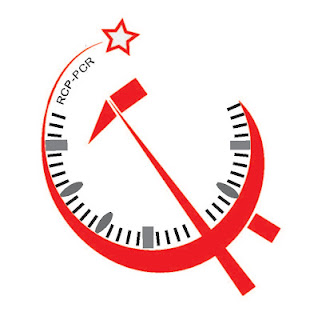 Toward a Unity of Proletarian Youth and Revolutionary Students
In the true words of radical hip-hop crew Dead Prez: “The same people who control the school system control the prison system, and the whole social system.” It’s no wonder they say this school shit is a joke! In Canada, 1 out of 5 teenagers between 15-19 years of age will drop out of school. The “education”—more accurately, the indoctrination—system under the dictatorship of the bourgeoisie teaches us servility and obedience to authority, to act and live within very prescribed (class!) limits, to become dutiful and “flexible” workers for the interest of the bosses, to serve, to obey, to vote in their sham elections!
For those of us who reject this bullshit, who wish for an education that will help break the unending cycle of exploitation and misery, who want to bring an end to the capitalist system, the PCR-RCP encourages your contribution to building a revolutionary movement of the proletarian youth and students this October 2012.
What is a revolutionary student? According to Mao, we judge whether a youth is revolutionary or not by whether they integrate themselves with the masses or oppress the common people instead. Our perspective is that there is no such thing as an independent student “class” with its own distinct interests. Class permeates the student population as it does the wider society. As students climb up the ladder of higher education in search of upward class mobility, the more likely they will become the trained administrators, bureaucrats, and sentinels for the capitalist system.
Is our intention to become student politicians or politicize students? To serve capital or to Serve the People? Our perspective is that it is very necessary to break with reformism and social democratic politics dominating the student and labour movements today. We want to align student struggles with those of young workers on and off the campuses, young workers who are shuffled into mind-numbing, back-beaking, low-pay, low-skilled, precarious jobs. Why should proletarian youth and revolutionary students pursue politics that ultimately preserve a degenerating political system that is not a direct expression of our class interests? We should struggle alongside youth who risk imprisonment by the racist capitalist system, with those who refuse to submit to bullshit authority and who are destined to fill the mega prisons in the coming years.
Revolutionary students must align their interests and develop clear politics to advance the struggles of the proletariat and oppressed masses toward the only solution that can bring an end to their misery. As the Quebec students are showing the rest of North America, it is necessary to “seize the time” and to expand the immediate struggles against rising costs of higher education and burdensome debt loads to attacking the economic foundation which gives rise to mass exploitation and oppression—to ideologically and politically attack the capitalist system and to mobilize for socialist revolution.  We plan to raise hell and to raise it well.
We therefore invite anti-capitalist young people across the country who are organizing in high schools, in colleges and universities, who are employed or unemployed, and who are from the First Nations, to accumulate our forces and experiences, to develop and organize collectively in the coming months a plan for revolutionary political education, education that will be transformed into militant political action in the class struggle, which will truly make the ruling classes tremble.