May 31, 2012
In the city where I live, Toronto, the activist left has reached a point of stagnation.  When it is not liquidating itself in reformist movements, its demonstrations have generally become lack-lustre affairs where a roster of usual suspects are trotted out to preach to the converted––boring people by droning on and on about what they already know––just before everyone embarks on a marshalled march route, promoted as "family friendly", that is more like a parade than a political demonstration.  Years ago we used to have snake marches, housing occupations, and a variety of direct actions that, while not organized enough to seriously challenge capitalism, were at least worthy of the label militant.  But now, as even the most recent May Day march demonstrated, we have become extremely complacent.

Perhaps this complacency is the logical result of a movementism that, pretending its strength is in multiple trajectories and a fictional spontaneity, could only produce stagnation.  Without a revolutionary organization to preserve an institutional memory of militancy, to learn from its mistakes and successes, and to set long-term goals, we were bound to stagnate.  Hence the rise of these boring demonstrations where we're forced to listen to even more boring speakers who sap us of the will to march before we even walk around the same damn four blocks… "Less talks more rocks," is the slogan that some of my comrades have advocated chanting the next time we're submitted to this bullshit. 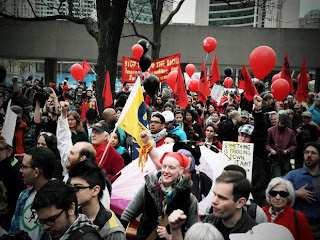 Toronto, like so many other cities in North America, is also renowned for trying to appropriate movements from other places and, in a fetishistic sense, make them their own.  Take, for example, this city's flirtation with the US #occupy movement.  I guess the idea was that our local leftwing activism had become so stale that we needed to jump on the bandwagon that was being driven about in another country, regardless of its problems, and try to rebrand it as Anglo-Canadian.  Regardless of the problems of this movement in the US, at the very least we can say that it was vital––an organic result of the US political scene.  In Canada, however, it was little more than an import: the next movementist flavour of the day, a half-hearted attempt to breath life into the corpse of leftwing activism without doing any of our own work.  "Hey they're doing this thing elsewhere, and people think it's exciting, so let's try to sell the brand here!"

Point being: the Toronto left (and I doubt it is alone here) has become guilty of refusing to do the hard work to build a serious, militant anti-capitalist movement.  For the past five or six years it has wasted its time trying to "rebuild the left" through reformist and petty-bourgeois ventures, and driving its movement into the ground, but rather than ask itself how it can build an organic militancy, it thinks that appropriating movements from elsewhere will be the solution.  Throughout Canada, the #occupy movement turned out to be the sad little import that it was––repetition as farce––because it was not an organic product of the Canadian class struggle.  Hell, it might have been a petty-bourgeois movement from the get-go, but it was still a radical petty-bourgeois movement in the US.  In Canada, it was just a dismal echo––its political discourse was connected to a different political reality, its participants wanted to pretend they were in New York.

But now, since this climate of austerity will necessarily produce rebellions, Canada has produced an organic uprising.  Unfortunately, this uprising, though more radical in nature than #occupy, is primarily limited to a single province––I'm talking about the Quebec Student Strike that has been raging, violently and spectacularly, since February.  And Toronto, being Toronto, now wants to appropriate the Quebec Student Strike rather than build its own student strike, or its own rebellion in general, because it's so much easier to just imitate a rebellion somewhere else, brand it as the next revolutionary flavour, and hope that it will do something cool for the city's left.

Quebec is closer to Toronto since it's bound up, to some degree, in Canadian class contradictions, but it makes no sense to simply tail its vicissitudes.  We need to ask, as a good comrade argued the other day, how the Quebec Student Strike was built: it was not simply a spontaneous explosion, much less one that we can import, but a result of years of strategic planning––there was a student strike in 2005 and, in the seven years that followed, significant work to produce this student strike.  Rather than simply trying to imitate what they have, and hope everyone gets with the program, we need to think about building the same momentum.  Better yet, as I consistently argue on this blog, we need to think about building something larger and more unified––a truly revolutionary movement that is larger than any movementist flavour-of-the-month.

Now the Toronto left, so quick to appropriate and fetishize rebellions from elsewhere, is holding marches in solidarity with the Quebec Student Strike.  Instead of trying to figure out how to painstakingly organize our own movement, we're again hoping that this imported movement will revitalize our stagnant left.  Instead of building our own student strike, let alone any other type of militancy, we are doing solidarity marches.  Really?  Shouldn't Ontario students, whose tuition fees are higher, be figuring out how to build their own strike rather than just proclaim solidarity with a movement in another country?  And yet, just as we appropriated the "people's mic" from New York's #occupy, we also appropriated the casserole marches from Quebec––at this point, solidarity or no, our attempts at left-wing revitalization do seem to be rather humorous.

Even still, the proximity of the Quebec Student Strike is important to recognize.  Whereas #occupy was something of a sad spectacle, rarely moving outside of its park or confronting the state, just last night the "casserole march" solidarity demonstration ended up being more militant than anything Toronto's #occupy had produced: entire streets were taken, there was no collaboration with the police, something of the militancy of seven or eight years ago in this city was briefly reclaimed.

At the same time, this solidarity march was initially intended to be hammered into the mould of Toronto activism: walk around a big block, return to safety, don't do anything that pisses off the police.  And when my comrades shook things up, and convinced the masses involved in the march to keep walking outside of the prescribed bounds until midnight, the people who had called this "solidarity" march, expecting a nice wrap up and "family friendly" aura, were enraged.

As an aside: it is interesting how the mainstream, movementist left expresses its anger when it doesn't get the order it desires.  Those of us who wanted more militancy, who want a movement that isn't just about solidarity with movements elsewhere but that is actually about anti-capitalism, intervened to keep the march going and, to the initial organizers' horror, the masses responded.  Rather than recognize that the people in the march had made a choice, the original organizers approached a group of us, yelled at us about being "anti-feminist" [they chose to approach a small group of us who were male-identified, ignoring the fact that we are not a primarily male-identified organization, that all of us would agree with more militancy, and even that the decision to divert the march was made between one of our comrades and an anarchist who was female-identified] because, much to our surprise, the organizers of this march were supposedly women.  Here it is important to note that, although much of what is called "identity politics" is extremely important to recognize, people who don't get their own way will often appeal to this type of politics, without doing any social investigation, to safeguard their own influence.

Regardless of these organizers' enragement, the march refused to end when they wanted it to end and continued until midnight.  There was some glimmer of an authentic desire for rebellion in Toronto, rather than just a desire to support and imitate rebellions elsewhere, that happened only after breaking from this city's rote activism.  We need to keep breaking from these stagnant patterns, work on building a new militancy.  Even better: we need to build a revolutionary organization that unites us with radicals in Quebec, rather than simply trying to imitate what the radical movement in Quebec is doing.  Yesterday night there was a demonstration that reclaimed something of this city's radicalism, even if the organizers tried to resist this reclamation, which went farther than the imported radicalism of #occupy.  But we still need something deeper, something more revolutionary, and I seriously hope that the interventions that my comrades took during last night's march will set the tone for a reclamation of this city's militarism.