The Quebec Student Strike through the MER

May 15, 2012
Despite the fact that it has become the largest and most militant student strike in the history of Canada, I have held off writing about the Quebec student strike for several months for a variety of reasons.  The first  of these reasons was that I was hoping to take a solidarity trip to Montreal (a plan that fell through due to work and commitments in Toronto); the second reason was that I wanted to write an "official" article on the student strike (meaning, of course, one that is published in a "proper" magazine/journal of sorts) which may or may not reach more readers, and I didn't want to undermine my chances of getting accepted by posting the same analysis on my blog ahead of time; the third and most important reason was that I felt the analysis provided by those comrades embedded in the strike would be better and far more insightful than anything I could produce (and I occasionally posted links of some of this analysis on r/communism).

Now the second reason for my blog silence on the Quebec student uprisings no longer matters.  For whatever reason, the magazine in question was not interested in my proposal.  Despite the fact that I was proposing this article for a "youth" themed issue, and that I wanted to look at the politics of the youth that emerged during the strike from a militant perspective, I guess the proposal was not youthful or enough.  Or perhaps it was rejected because I wanted to look at the political approach of the Mouvement Étudiant Révolutionnaire (MER), a PCR-RCP front group, and through their theory and practice during the strike to date the following problematic: i) "historically student activism happens primarily within universities––where students are perhaps radicalized by encountering challenging ideas––but the students who are able to attend university, and those who will complete their degrees and even enter graduate school, are most often more economically privileged than those who will never sit in a university classroom"; and, ii) "student activism should find a way to reach out to the youth who might never have the privilege to attend university because these youth will be those destined to become the next generation of workers or, lacking options, the next generation of soldiers."  Important perspectives one would imagine for an analysis of the youth, all the more important since I was proposing to interview MER members fully embedded and involved in the student strike where the politics and militancy of the youth was being articulated, but I think I underestimated the possible leftism of the magazine in question. 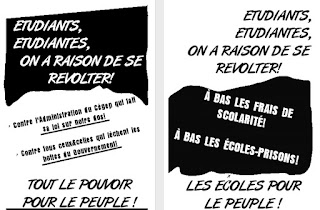 Even still, the third reason for my silence is still pertinent: I think the analysis of the MER, which emerges from militants (and the most militant faction, in my opinion) involved in the strike, is better than anything I could write here.  And since I want to shop said magazine proposal around to other self-proclaimed lefty magazines/journals in Canada because I think it is important (and because I am also still unsure of how I'm going to write said proposal), I am going to use this post mainly to provide some links and gloss to the MER analysis/report of the strike.

I think it is extremely important for those outside of Quebec who are planning solidarity trips, and who like to call themselves "communist", to read the analysis of militant communists embedded in the strike rather than get caught up in the same-old movementist furor that has marked every uncritical analysis of recent rebellions from the so-called "Arab Spring" to "occupy".  Indeed, I got rather annoyed when a bunch of lefty friends/acquaintances were forwarding around an article from the Guardian about how the Quebec student strike was tactically and politically influenced by "occupy."  Typical bullshit of those who have been over-fetishizing occupy as if it's the newest and most radical thing in the world.  The truth is, just as occupy had little to no impact in France, where general strikes are common and the racialized poor have violent uprisings on a regular basis, it has had little to no impact in Quebec.  This student strike was influenced by the previous student strike, really had nothing to do with the occupy movement, and was more determined by the work of militants and activists embedded in the Quebec scene, not a movement that, when imported to Montreal, was tiny and only lasted for a week.

Returning to my complaint about the movementist furor in general, I think it is important to emphasize the analysis, practice, and strike participation of the MER because, as I've argued in the context of other uprisings, these uprisings by themselves are incapable of being anything other than uprisings; they are opportunities for radicalization and revolutionization, but they require the intervention of a revolutionary organization so that the opportunity is not lost.  Otherwise, they will peter out, lapse into aping the dominant ideologies of the dominant classes, and allow themselves to be structured and managed by other organized groups––social democratic parties (the NDP or in the case of Quebec, Quebec Solidaire) or, worse, fascist organizations.  So I cannot help but be frustrated when fellow and self-proclaimed communists are willing to celebrate the Quebec strike but don't want to hear anything about the involvement of a militant communist organization––let alone how its political approach has possibly impacted the development of the strike––and instead would prefer to look at the strike in an abstract manner.  In the same way they looked at occupy or Arab Spring, or what-not.  In any uprising, if we call ourselves communists and militants, it is our job to locate the most progressive and organized groups with the most militant line and support them.  Otherwise we're just tourists.

But for those readers who are interested in the militant, revolutionary political line of Quebec's student strike, then I would suggest you click on the links provided below.  Although they are in french (and if you can read french all the better!), they do not translate too badly through google translate––not that the comparison gleaned by poor french reading skills is anything to go by––and it shouldn't be too difficult to work your way through the fuzzy translation.

First of all, because this article is in English, one should read the MER's 300,000 Students on Strike which is a general overview of the exploding strike, from a revolutionary perspective, written in March.  This article concludes, rightly, that "the victory of the student strike will depend on the capacity of the most militant sectors among the student movement––those who identify themselves with the interests of the popular masses––to keep the initiative and make the bourgeoisie and its state apparatus pay the high high price."  Which, logically leads me to the next important MER link regarding an ad hoc coalition between workers and students organized partially by the MER, the kind of thing any leftist worth their salt should find important… unless they just believe these coalitions will happen magically by themselves without any hard work.

Secondly, it is very important to read the MER's assessment about the need for militancy and a rejection of the reformism that would emerge in the student strike that was written before the first article cited above.  Arguing for the need to put forward "a discourse and practice based on anti-capitalism and unity with workers, the unemployed, undocumented migrants, and the popular classes" [my rough translation], the MER lists a number of proposals that would become important for the militant line it emphasized throughout the strike to date.  In this context, it is also worthwhile to read their small piece on the politics of "the drop-out" and remember that the MER is more interested in organizing highschool and CEGEP students than [the more privileged] university students.

Finally, the interested reader should take a look at the most recent MER assessments of the student strike and realize that their earlier analyses about the reformist limits of the strike, and the need for militancy, was generally correct.  As was their argument that the strike depended on "the capacity of the most militant sectors".  It was not the university student groups who wanted to settle for a tuition freeze that sustained the strike after the Charest government was willing to accept the original demands who tried to shut down the Liberal convention, but the militants––many of whom were highschool and CEGEP students––influenced by the line represented by the MER.  In The Battle for Victoriaville, the MER would be the most vocal group in the student strike to argue:


Far from proposing a substantially different proposal from the previous one, the government's new offer instead represents a significant regression that demeans the struggle and that wants to incorporate the student movement into the management of many universities.  If the offer is accepted, this would integrate and handcuff the student movement… Reformers fear that that movement is escaping their grasp.  The capitalists are afraid that the reformists are unable to control their troops. [again, my rough translation]

And then, in the most recent The School for the Rich, the Prison for Others, the MER has a brief assessment about the Conservative Party's intervention in the strike, another connection between the demands of the most radical youth with the strike (unemployed youth who cannot afford to remain in school or go to university often end up in prison), and renewed demand for increased militancy.

In any case, I would advise that anyone planning a solidarity trip to Quebec to support the strike should get in touch with the MER, see what call-outs they have made and what demonstrations they're organizing, rather than just go the student union route where the demonstrations will probably be more managed, more reformist in tone.  And if members of the MER would like to link to posters and propaganda of public demonstrations/events they have planned and/or have endorsed in the upcoming two weeks, that would be great.