May 05, 2013
Following the first successful PCR-RCP sponsored student conference in Toronto in November, a co-ordination team from every group involved was created in order to organize a follow-up conference in Ottawa.  This time even more student and youth organizations throughout Ontario have demonstrated interest, semi-public organization has increased in scope, and it seems as if this second conference will be even more successful than the first.  Although I am not a student (let alone "youth"), and thus did not attend the first conference (though I helped with some of the logistics since it was in Toronto), I have been asked by the co-ordination team to promote the second conference. 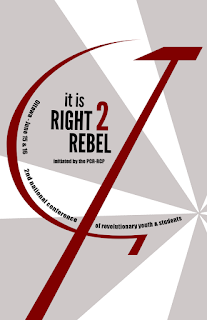 While there will probably be some of the typical neo-reformist and CFS complaints about this, if any youth/students are interested in getting involved in a revolutionary student movement and thus getting beyond the tailism advertised by so many other leftist groups––that is, in getting involved with building a movement, in co-ordination with students in Quebec, that is capable of something more than reformism and CFS simplicity, then they should find a way to attend the second conference and get involved.