Learning From Documents of Past Struggle (continued)

May 31, 2013
One of the editors of the Canadian section of the Encyclopedia of Anti-Revisionism Online [EROL] has informed me that all of the documents concerning the dissolution of the Workers Communist Party [WCP] have been posted.  Since I wrote about my discovery of an early WCP document in March, I feel it is worthwhile to provide a sequel to that post now that I've had the time to read some of the significant documents of this organization's dissolution––documents that were largely unavailable until now.  As some of my readers will be aware, the WCP was one of the two largest anti-revisionist communist organizations in the 1970s/80s in Canada (the other being En Lutte!) and that its collapse happened over the space of a year.  There has been little to no assessment of this collapse available to this generation of the Canadian left; indeed, much of the contemporary left is unaware of the importance of that organization and thus could care less about whether or not it ceased to exist. 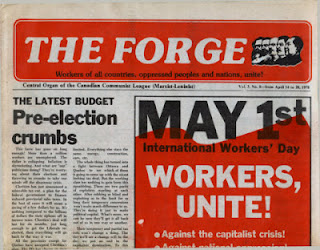 In my opinion, however, it is important to examine the strengths and limitations of revolutionary organizations that were once significant so as to avoid repeating past errors.  Often we tend to repeat the past's mistakes, even when we think we are forging a new path, and there is sometimes little to know historical memory over an experience that can and should teach us something about how to organize as communists now.  Thus, the documents of the WCP's crisis and dissolution are significant in that they tell us something about the errors of a broad-based revolutionary organization that at one point and time saw itself, for perhaps good reason, as the vanguard of Canadian revolution.  Moreover, the analysis provided by some of these documents should teach us something about the limitations of anti-revisionist Marxism-Leninism of the "Mao Zedong Thought" variety and how, despite the name maoism, the organizations of this period were still caught in the boundaries of Marxism-Leninism as yet unaware of the epistemic break that would happen with the emergence of Maoism as a new stage of revolutionary science.  And the most interesting document of the WCP's collapse, Elements of a Sum Up of the WCP, is extremely enlightening in that it deals with a problem of organization that I feel was shared by many ML parties of the New Communist Movement.

First of all, the authors of Elements spend a significant amount of time discussing the WCP's dogmatic conception of the revolutionary party:


"Like many parties, the WCP was strongly influenced by J.V. Stalin's approach to the party. We uncritically absorbed Stalin's notion of the monolithic party, the 'general staff' of the working class, run like an army with its members totally unified in thought and deed, marching step under the 'infallible wisdom' of the leadership and kept in line by the cadres. We shared Stalin's vision of democratic centralism which put extreme emphasis on centralism and considered democracy more or less a formality, a luxury that could seldom be afforded, rather than a strategic necessity to develop political line, correct erros, and give party members real control of their organization."

From this critique, the assessment goes on to discuss the problems of "monolithic unity" that smothered the debate-from-below that should be necessary for a revolutionary organization, as well as "the supreme concentration of power" on the part of the leadership (referred to as "the vanguard within the vanguard"), and finally the fetishistic obsession with the party for the sake of the party and not for what the party is meant to accomplish––class revolution.  The symptoms of this problem were an eventual and perhaps predictable "sectarianism" (that, interestingly enough, was critiqued by En Lutte! years earlier) and a contempt for popular rebellions.

Secondly, the WCP was


"strongly marked by a dogmatic and non-dialectical approach to Marxism, by mechanical materialism, and economic determinism bequeathed by Stalin to the communist movement. […] Our dogmatic approach blinded us to the importance of striving to develop Marxist theory to meet the realities of our society."

Apparently the inability to develop a political line that emerged organically from the concrete circumstances of Canada was a problem.  According to this internal critique, the WCP was guilty of treating marxism as "a set of general principles, a doctrine that is revealed in the classics or carved in stone in the statues of the Third International."  Debate was suppressed and the fissure between the leadership and rank-and-file became more pronounced.

Thirdly, there was the problem of the leadership's class composition: it was "largely petit-bourgeois, male, and at the highest level anglophone."  Interestingly enough, the fact that the WCP (and also En Lutte) were moving away from Quebecois nationalism was not seen as one of the organization's strengths––something perhaps we should understand as a strength today rather than a weakness––but a serious deficiency.  Hence, despite the proper critique of the leadership's class composition, those who wrote this summation document are incapable of critiquing another deficiency of that period of struggle: the focus on Quebec as an oppressed nation at the expense of the indigenous nations.  Even still, since anglo-chauvinism does still exist in Canada the critique here could be seen as a critique of that problem––indeed, the fact that the leadership was anglophone even though its stronghold was in Quebec and its Quebec rank-and-file were francophone was definitely a problem.  Moreover, the failure of the leadership to adequately reflect the class it was trying to organize speaks again to one of the significant contradictions in Marxism-Leninism that still needs to be addressed: petty-bourgeois leadership deciding what counts as proletarian consciousness.

Although the summation document demonstrates no awareness, despite a few off-handed remarks about "economism", of the limited strategy of trade-union agitation that might have also precipitated the WCP's decline, it is significant in that it demonstrates an awareness of the limitations Marxism-Leninism had reached in that anti-revisionist period.  The monolithic party, dogmatism, the class composition of the leadership… These all demonstrate the boundaries of Marxism-Leninism that needed to be transgressed by Maoism.  And though it is partially accurate to claim that the WCP was a "maoist" party in that it saw itself aligned with the Chinese Revolution led by Mao Zedong, here again is the difference between the name and concept of maoism: what was being practiced by the WCP, like the majority of revolutionary organizations in that period, was an anti-revisionist Marxism-Leninism structured around the qualifier Mao Zedong Thought.  There was not yet the assessment of the Chinese Revolution's theory and practice, its successes and failures, that could only be coherently developed by the end of the 1980s and the beginning of the 1990s.

A party without a mass-line, a leadership divorced the masses, a dogmatism produced by the failure to develop a concrete analysis of a concrete situation… Clearly these are all still problems that any revolutionary organization must grapple with in the contemporary conjuncture.  And though Maoism is not immune to these problems, the theoretical development it would eventually represent when it became, properly, Maoism provides us with the tools to navigate these pitfalls.  Possessing the tools are one thing; implementing them is another.  There is always the danger, as this document points out, of abandoning communism for revisionism due to the historical fact of failure.  And so they conclude:


"To rebuild a revolutionary party, our fundamental and long-term challenge is to develop Marxism and overcome the errors and problems of the past. But it will be impossible to accomplish this difficult task unless we first demarcate from the assorted non-Marxist and reformist conceptions. Otherwise it won't be Marxism we 'develop', but a new hybrid of social democracy."