On 2012 and the Supposed "Disappearance" of the Mayans

December 27, 2012
A week has passed since the supposed "Mayan apocalypse" of 2012 and, just like other predictions of armageddon, the world remains.  But most charlatan prophets are able to survive the failure of their predictions by simply claiming they misunderstood their calculations or that the dates they provided were, in some metaphorical manner, apocalyptic.  Besides, two of the most significant new age gurus who were advertising 2012 as the end of the world (Frank Waters and Terence McKenna) are dead. 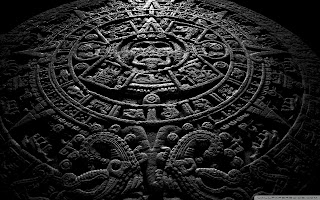 So the phenomenon of 2012 ties into the entire (and ludicrous) new age claims about the "mysterious disappearance" of the Mayan people somewhere around 900 AD.  Past new age guru James Redfield, for example, argued in The Celestine Prophecy that the Mayans disappeared entirely from this reality by vibrating their atoms and transcending the earthly plane––or some such nonsense.  And if the Mayans were so advanced that they left this mortal world for some god dimension then, I suppose the argument goes, we should treat their [supposed] predictions about the end of the world with great respect.

The problem, though, is that the Mayans didn't "disappear"––they still exist as a people with a distinct language and culture––so all this garbage about their supposed disappearance, a hallmark of new age literature and even some speculative fiction, is both silly and offensive.  Obviously the Mayan Empire fell, but to claim that the collapse of this empire also meant the disappearance of the people and the culture that informed this empire is like saying that the Italians disappeared when the Roman Empire collapsed.  Stretching this analogy further: simply because Mayan culture now has changed since [what we know of] it was practiced from when it was an empire civilization does not mean the Mayan people now are different than the Mayan people anymore than the Italians now are different from the Romans then… Of course they are different because it is a different time and humans are mediated by history!  Even still we understand that the Italian people of today emerged historically from the ashes of the Roman Empire, just as the Greek people of today emerged historically from the ashes of Athenian and Spartan society, and that the Romans and the Ancient Greeks didn't "disappear" in some mysterious sense.

Of course, the main reason nobody speaks of mysteriously disappearing Greeks and Romans is because of eurocentrism.  After all, Greeks and Romans are the mythic origins of Europe [mythic because Europe as an unbroken historical culture with its roots in Greece and Rome was, as Martin Bernal and Samir Amin have discussed, an ideological invention] so they can't have "disappeared".  But according to eurocentric logic, peoples outside of Europe cannot possess the heritage of ancient and complex civilizations.  Indeed, the same kind of logic was applied at one point of time (and by some racist antiquarian pseudo-scholars even now) to Egypt: European archaeologists and historians studied the pyramids and the great offerings of ancient Egypt and, because they could not accept that the [non-white] people living in Egypt now were connected to this past culture––because clearly only "advanced white people" could build pyramids and such––they invented all this garbage about a caste of caucasian Egyptians ruling over a non-white slave caste.  And the silly new age variant of this racist history, of course, was that the pyramids were built by aliens… because if white people weren't around to build these things then it must have been creatures from outer space!

The same logic applies to the Mayans.  A civilization that attained a high level of complexity long before the peoples in Western Europe ever built a single city has to be some sort of mystery; its people cannot be the Mayans of today but some vanished race invested with a secret knowledge.  The sheer racist ignorance of this assumption informs the entire new age discourse surrounding Mayans and their calendar.  And it is an ignorance not only because it is eurocentric nonsense but because it ignores the actual facts of history.

The Mexica [Aztec] Empire, for example, was arguably more advanced than the fallen Mayan Empire around the time of Contact––so advanced, in fact, that the conquistadors were shocked and, just like eurocentrists today, could not believe that non-Christian peoples were capable of building what appeared to be "cities of gold".  And though colonial apologists like to argue that they went into decline because of the "accidental" spread of small-pox [it wasn't accidental] or maybe because they already were in decline [and not made to decline through Spanish conquest], they do not assume that the Aztecs possessed some secret and mysterious knowledge that allowed them to build their mysteriously advanced civilization.

Moreover, just as the Roman Empire had preserved aspects of Hellenic culture, the Mexica Empire had preserved and synthesized aspects of Mayan culture.  In fact, they had libraries with Mayan texts––all of which were burned by the conquistadors when the Mexica culture was crushed.  Chances are, the supposed "mystery" of the decline of the Mayan Empire was discussed and possibly explained in the texts torched by the Spanish colonizers.  More importantly, since Mayan city-states still remained long after the collapse of the Mayan Empire, the city-state of Tayasal, for example, was thriving during the Spanish conquest––like the rest of the civilizations in the Americas, it was demolished and its people decimated.

And really, is the decline and fall of any civilization really that much of a mystery?  We do not speak of the "mystery" of the collapse of Roman civilization even though historians are still arguing over what caused its decline.  The Mayan Empire also "disappeared" after a long period of decline, just like so many ancient civilizations: simply because we cannot figure out the precise factors should not cause us to speak of disappearance––for to speak of disappearance is to also disappear the Mayan people still in existence.

Despite the fact that the decline and collapse of the Mayan Empire should not be treated as some great "mystery" where an entire people "disappeared", the mysteriousness is still prevalent.  Just google Mayan disappearance and you'll find innumerable crackpot sites claiming that anthropologists and archaeologists are still "baffled" by the supposed disappearance of the Mayans.  But just as December 21, 2012 didn't disappear the rest of humanity, the Mayans also are not disappeared and it is only baffling that the collapse of their ancient civilization is treated as mysterious in the first place.