December 03, 2012
Samir Amin once remarked that people who want to change society for the better generally have better ideas than people who want to preserve the status quo––for if society, in a world historical sense, is defined by change than those who deny change will have static and repetitive ideas that are out of step with reality.  I've recently been contemplating this axiom in regards to values.  Namely, the fact that bourgeois values as a whole are boring and that those values beyond the threshold of capitalism seem far more interesting and exciting.  This is partly because I'm a new father and, in the process of just starting to raise my child, have encountered those values that are the hallmark of the bourgeois family.  And despite my general rejection of these values out of political principle, I also want to reject them because I actually find them extremely boring and do not think my child would have much fun being raised according to normative bourgeois values. 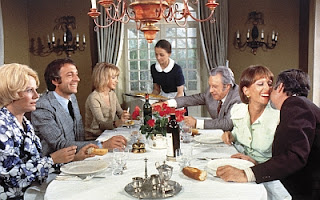 Despite all the anti-communist ideology that wants us to believe that the culture of those great but failed socialisms is stagnant and marked by drudgery (long bread lines! shitty art! hive-mind dronishness! intellectuals sent down to the countryside to [gasp] live as peasants!), it is telling that cold war anti-communist propaganda was predominantly marked by a defense of utterly boring bourgeois values.  One of the supposed problems of communism––and what all god-fearing people at the centres of world capitalism were required to fear––was that it wanted to destroy "family values".  As a character in an FBI-approved anti-communist comic once complained to his evil communist overlord: "But with my wife working, who will care for my family?"  So in the 1950s we have a hatred of values that would force that version of the bourgeois family to change, and this is why people are supposed to hate communism, but now we know that even under capitalism that family changed.

Moreover, due to the fact of anti-communist ideology and the failure(s) of actually existing socialism, we tend to forget that the values mobilized under communist revolutions––regardless of all the setbacks and dead-ends––scandalized the capitalist world.  For example, Roland Boer once reported on the little known fact of nudism following the Bolshevik Revolution where revolutionaries had a naked "down with shame" march.  And though I am not planning to argue that nudism is a quintessential communist value, I do think it is rather amusing to imagine how such activities would be viewed by the capitalist world in the early 20th Century––especially by America and its puritan culture where some bathing suits were considered scandalous.

And yet rugged pro-Americans really want to defend American capitalist culture as being all about "freedom" and exciting new fashion trends.  But let's be honest: American culture, as spectacular as some of its offerings might be, is something of a wasteland; anything interesting that has emerged from this wasteland has been, at least initially, counter-cultural.  Why are people even proud of this shit and the values it promotes?  Apparently we are supposed to believe that some essential rugged individualism and pure capitalist grit will produce better ideas and values through the magick of competition––this is what libertarians tell us when they complain about socialism and how it supposedly stifles creativity.  Ayn Rand's Atlas Shrugged, for example, has entire sections about the individual creativity that is promoted by capitalism and we even meet savant novelists who write novels in their mind because their pursuit of capitalism has made them so creative.  But Atlas Shrugged is also a bloody boring novel, a science fiction so unimaginative that it thinks the future world will be defined by trains and radio, and thus proves in form the limits of an unimaginative theory that is still caught within static bourgeois categories.

Of course, bourgeois values can always account for cultural transformation; this is because bourgeois values are ultimately about commodity fetishism.  Things can be changed by people revolting against aspects of the cultural sphere, but these changes can also be commodified.  And within a context where capitalist exploitation is still active, it is indeed possible for family values to be altered just as long as this alteration does not affect the fundamental class division of capitalism: the set family values defended in the 1950s against the onslaught of communism are not entirely the same normative family values of contemporary capitalism––though reactionaries, and especially the Duggar Family in the US, would have us believe differently––even if they share similar features.

So when I complain about bourgeois values being boring, I don't really mean the values of the 1950s family or anything defined by the surface level of lifestyle (although there is definitely boringness in this surface level) because I'm talking about something deeper.  Something that libertarians call collectivism that cannot be commodified in essence, since it is alien to capitalism, though it sure as hell can be commodified in form (in slogans, in books and movies, in team sports) but even the commodification of form produces interesting contradictions.  This is the value of serving the people, of becoming an actual social being, of aiming oneself at a post-political world of classlessness.  And this value is not boring because it is also, for so many of us living today either at the centres of capitalism or in the peripheries, somewhat terrifying––whatever we might think of something that is terrifying we have to at least admit that, by virtue of being terrifying, it is not boring!

Upon this often terrifying collectivism has been built, at different historical conjunctures, those other cultural values that were also and initially treated as terrible.  The value of womens' liberation and womens' control of reproduction, for example, which once (and in some areas still) terrifies the bourgeoisie were being promoted in the Russian and Chinese communist revolutions long before they were seen as acceptable in the capitalist world… And these values were pursued because they were a logical corollary of the value of collectivism––they are not, as honest libertarians remind us, the logical corollary of what capitalism values.

And so values that are essentially collectivist are the values I want to pursue and endorse, despite the difficulty of doing so in a context where I have been socialized to operate according to anti-collectivist values.  Values that are utterly boring because they are only aimed at reconfirming the world as it is and not as it could be.  Values that are safe because, just like someone living under a pre-capitalist mode of production, I have been socialized to operate according to their logic.  Values that need to be smashed, even if they smash people like myself, so that something new and exciting can emerge.


[And since I am posting this on December 3rd, my birthday where I am now turning 34, I am yet again going to remind those readers with means that they can support MLM Mayhem by donating whatever they think is appropriate.]