November 04, 2012
As advertised months ago, the PCR-RCP is holding a semi-closed conference for revolutionary youth and students in Toronto in early December.  This conference is important, following the events in Quebec City (in which the PCR-RCP's student mass organization was involved), since it is an attempt to produce a revolutionary youth movement that might be able to intervene in these rebellions with something more than a movementist ideology.  Anyone interested in participating should email seizethetime2012@yahoo.ca for further details. 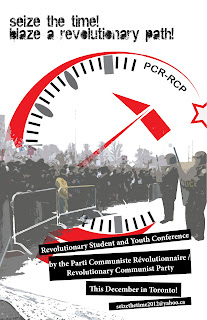 Also if you're interested in participating you probably shouldn't be older than 25 since the conference is geared towards a younger generation of anti-capitalist activists and not to those of us who imagine we're young––who might want to hold unto their glory days of student activism––but are in their thirties and thus should not be considered "youth".  This disqualifies me, of course, as much as I would like to pretend I'm "young at heart".

For more information about the event, you can download a pdf brochure here.