July 06, 2014
As I noted in an earlier post, all of the things some of us were saying about the NDP's drift to the right during the 2011 Elections Boycott was proved in the 2014 Ontario Provincial elections.  Although some of those leftists who were desperate to cling to the myth that the NDP was somehow a "working class party" then continued to persist with this illusion (coming up with innumerable sophistries to justify this irrational belief), most realized what was happening and could not in good conscience continue to support a party that was barely even social democratic in name.  The problem, however, is that this insight did not permit a break with the ideology of bourgeois democracy amongst the majority of mainstream leftists and left organizations. 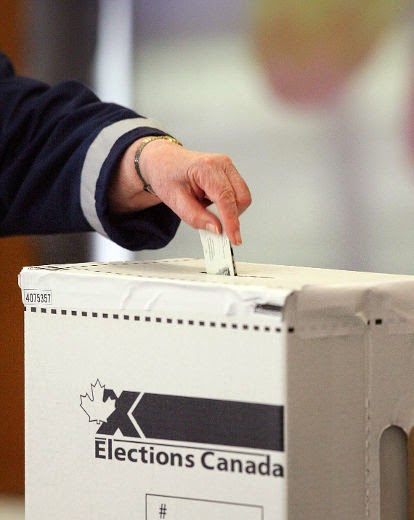 Take, for example, the Bullet's recent article, NDP Lurch to the Right Underscores Need for a New Left-wing Party in Canada by Roger Annis.  Here we have a stunning example of an inability to think outside the box of bourgeois democracy, promoted in the Socialist Project's ostensibly "marxist" online periodical.  On the one hand there is finally the recognition that the NDP is as much of a working class party as the Liberals, and in this electoral round was promoting a right populism, but on the other hand, instead of using this as evidence for the necessity of extra-parliamentary politics, the article is simply a lament for the absence of "left-wing" parliamentary party in anywhere other than Quebec.  Thus, rather than a demand for revolutionary politics––a demand guided by the critique of the limits of bourgeois democracy––we instead have a demand to build a new NDP that will be similar to Quebec Solidaire [QS], as if this is the limit of what a left-wing party can and should be.

In my upcoming book I have a small section entitled "the electoral trap" which examines the strange ideology amongst marxists at the centres of capitalism to waste their energy supporting bourgeois democracy while, at the same time, admitting that, theoretically and historically, revolution cannot be accomplished in this context.  That odd gap between what theoretically maintains and what one does in practice is maintained by this strange fidelity to reformist practice; it exists and persists because for a variety of reasons, but one of them being the inability (and seeming unwillingness) to build a revolutionary movement.  I almost wish this Bullet article had existed back when I wrote the book so I could cite it as a prime example of this illogical position, particularly because Annis writes as if the "need for a new left-wing party in Canada" means the need for new social democrat bourgeois party in Canada.  The bar for what counts as "left-wing" has been set pretty low, but those who have had difficulty with breaking from bourgeois legality have been setting this bar low for a long time.

Usually, whenever those of who speak of the need to boycott bourgeois elections as part of a process of building a revolutionary movement, the left-wing defenders of electoral participation have responded with the old stand-by argument that did make some sense at one point in time: we need the breathing room that a reformist party can give us, because it at least makes life better for the working-class, while we primarily focus our energy on building a revolutionary movement.  The Annis article, however, has even left this justification behind since it is arguing that we should primarily focus our energies on building an electoral party to replace the NDP with the typical starry-eyed affection for the QS or the days of Tommy Douglas.  If we don't have that "breathing room" anymore then, by golly, let us spend all of our energy building it so that we can protect the historic compromise between labour and capital rather than realizing that: a) the objective circumstances are right; b) the subjective circumstances are severely lagging behind because we want to waste time doing the job that social democrats would do without us.

What makes this article especially humorous is that, if Annis just paused to reflect a little on what he was arguing, he would realize that other tiny social democrat electoral parties already exist.  Indeed, we have parties that are classically social democratic in the way the word used to mean before it became completely synonymous with "social welfare capitalist party".  As the editors of the Bullet must know, social democracy was once a term that meant socialism, and that the largest communist parties of the 2nd International were named "social democratic"––hell, even Lenin once used the term "social democracy" as a synonym for communism.  What happened, of course, was that Bernstein and his ilk decided that communism could be achieved through elections and bourgeois reform, thus abandoning the theory of class struggle, and so the Social Democratic Party of Germany [SPD] became a revisionist party and the term "social democracy" became a slur, meaning pretty much what it does today.

And so we have classic social democracy parties whose practice amounts to pursuing revolution in the bourgeois framework: the Communist Party of Canada and the Communist Party of Canada (Marxist-Leninist).  These parties even have histories that were, before they became ineffective parts of the bourgeois system, at one point of time revolutionary––far more revolutionary than the NDP has ever been––and because they're electoral parties that say communist sounding things which are really just social welfare things, they seem to be precisely what Annis thinks Canada (with his exception of the QS) lacks and needs.  Perhaps the only reason he pretends they don't exist is because they still have that troublesome word "communism" attached to them, something even an article in the Bullet can't endorse even if the Socialist Project claims they want revolution instead of reform.

The truth is that those marxists and marxish leftists who talk about building new social democratic parties really don't want anything to do with a revolutionary party; they would rather imagine that communism will happen spontaneously and focus on building that apparatus that helps prevent the emergence of communism, thus making their delirious spontaneous communist emergence even less possible.  Otherwise, Annis and the other marxists who once thought we should vote for the NDP would actually get along pretty well with the members of the CPC or maybe even the CPC-ML.  But, no: they just want the classic NDP or the QS.

Hence, the fact that Annis can conclude his article by writing that "[s]ocialist society offers to the individual a path to realize his and her full human potential" and that to produce such a society "we need a revolutionary, democratic government that carries through a transformation of politics and economics one confident step at a time" is pretty funny considering that his solution is not the kind of party that can or will do this.  After all, history has taught us differently and this neo-reformist bullshit just wastes time, refusing to understand reality so as to live in the same bourgeois fantasy opportunists have been trying to convince us was correct since Bernstein.  And if Annis really does believe that his socialist society can indeed come about with a new left-wing electoral party, as noted above he would be better off joining the CPC which, unlike the classic NDP or the QS, does claim it wants to build a socialist society through elections.

And really, can the Annises of Canada stop pretending that the QS is socialist when it is simply pursuing a political project for a more humane capitalism?  If the QS got into power tomorrow, no matter how radical its demands were, Quebec would still be divided by classes and the institutions designed to protect class power would still exist––they would not suddenly crumble over night. So must we marxists tie our practice to projects that are thoroughly social democratic––is this the historical necessity demanded of us?  More is demanded of us.

Look, there is an implicit boycott amongst the masses that is extremely significant.  The assumption that the electoral process will improve their lives is uncommon amongst the poorest of the poor.  You're not going to convince these people that the existence of another party running in the same elections (a better NDP, something similar to the QS!) is going to improve their lives.  This is not some errant assumption, but a fact that can easily be gleaned from social investigation.  During the boycott(s) when we talked with the people who weren't voting, there were times when they were suspicious of our motives until we convinced them that we were not a new electoral party trying to get their vote.  Whatever "new" electoral party Annis thinks he can create is not going to be supported by the only people who can build the socialism he desires… Unless he thinks socialism can be legislated into existence by politicians, but in that case who are the people who will provide this new "left-wing" party with its votes?  Obviously not those who refuse to boycott, which is sometimes half of Canada and sometimes more than half of Canada; obviously not those people who are just going to vote for the mainstream parties.

If the recent electoral circus in Ontario proved that the NDP is not worth our time and energy, we should learn from this fact rather than trying to build a new social democratic electoral party and launch it on the same trajectory.  For the problem with the NDP was not that it "took a wrong turn" or that its leaders "strayed" from some special socialist path; the problem is that it was a party that functioned within a ruling class institution and, as such, was thoroughly determined by capitalist logic.  It was a party of a particular section of the bourgeoisie, even if it could gather in the worker elite of trade unions, and operated within a context that exists primarily, despite contradictions, to valorize bourgeois power.  This is the reality that has finally been revealed in the latest election spectacle, and though Annis recognizes a part of this truth in his article, he still cannot escape the ideological power the electoral system and bourgeois legality wields.  Which is why the electoral system is, as Althusser once pointed out, an ideological state apparatus; it is extremely difficult to break from something that we have been socialized to accept as good, beautiful, liberating, essential to our existence as humans.  Even when we see its results, even when we see the cynical squalor into which it sinks, we must still find a way to embrace the same cynicism.