Capitalism Works… but that's not the problem

May 01, 2014
After my most recent post I realized, and not for the first time, how annoyed I get by the discourse that "capitalism doesn't work."  This is because I hold that capitalism works very well according to its intrinsic logic and that is this logical working-out of capitalism that needs to be rejected: it works and what it accomplishes is its problem, not its failure to accomplish its logical aims.  Although this annoyance is mainly driven by some desire for philosophical precision, and thus carries problems that might be distant from the tactical use of the discourse, I do feel that is for the most part justified.

To be fair, when some people raise the slogan "capitalism isn't working" they are not arguing that there is a gap between capitalism's logic and implementation.  Usually they mean that capitalism isn't working for people, that it is not working in the service of humanity as a whole.  Sometimes they might be attacking the most asinine capitalist ideology––the kind alienated libertarians espouse––that claims that capitalism will indeed "work" once everything is privatized.  (As I pointed out elsewhere, however, no successful capitalist actually believes this fantasy!)  In this sense, to claim that capitalism does not work is to imply that it can never work because it doesn't do anything useful for humanity as a whole, nor will it ever do so, and so must be replaced by a system that does work.  Again, fair enough on this count; it is easy to understand and sympathize with the intention of the discourse when it is used in this manner.

And yet I feel that the imprecision of this discourse is such that, regardless of the intentions of those who use it from time to time, it is never confined to the above meaning.  Rather, it spills beyond this meaning and tends to imply, due to its vagueness, a variety of problematic claims.  One claim is that capitalism is not working now because it might have worked in the past.  Another claim is that capitalism doesn't work because it is "broken" (this was the occasional slogan of the Ontario Coalition Against Poverty, a militant anti-capitalist organization that has done great mass work and direct action), which implies that there was something laudable in its initial logic. 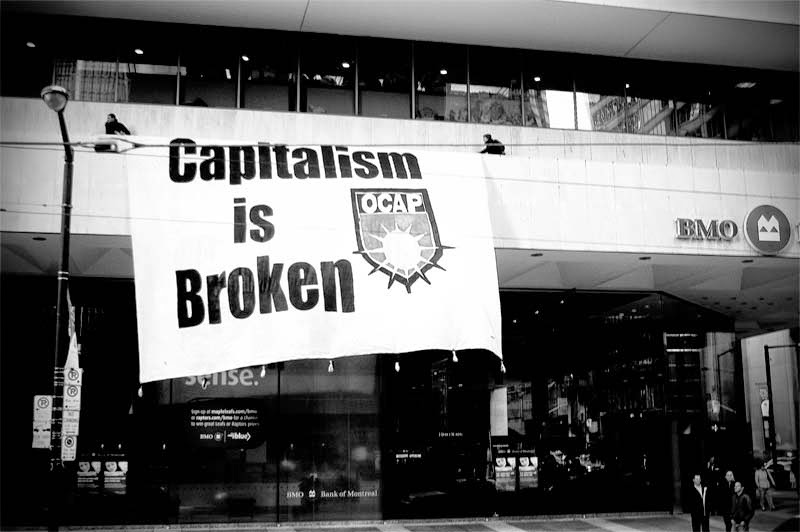 First of all, we need to recognize that capitalism has indeed worked now and in the past but that the way in which it works has always benefited the ruling class.  Its core logic of surplus value and accumulation is such that it works in such a way as to generate cycles of crisis and stability, slowly devastating the world as a whole.  Whereas the failures of actually existing socialism were catastrophic because they were failures, capitalism is catastrophic simply by being successful.  It works very well in accomplishing this catastrophe, which means affluence and stability for a tiny section of the human population at the expense of everyone else.  It only doesn't "work" in the sense indicated above: it is not a sustainable mode of production and will collapse when it has succeeded in undermining the very basis of existence.  Until then it works very well in accomplishing this devastation of existence, and has done so since its emergence.

Hence, the assumption that it is no longer "working" now, and might have worked better in the past, is simply an assumption premised on the delusion that there was a time when capitalism worked differently––when it wasn't premised on a logic that, in the words of Marx, was written in fire and blood.  Specifically, it is a discourse that belongs to a formerly privileged sector of the global working-class who, because of the historic compromise between capital and labour, are upset that capitalism is no longer working for them because they are being pushed to the margins of the labour aristocracy.  Or it is a discourse of some first world university students who, unlike their parents' generation, are discovering that no one is going to just hand them a job when they finish their education.  Capitalism isn't working for me is often the sentiment behind this discourse: why can't things just go back to the way they were decades before the recent crisis when the social democracy of the global metropoles was more secure?  The "occupy" movement tended to express this sentiment.

Perhaps another way of thinking of capitalism "not working" is that its relations of production no longer "work with" its forces of production because the latter, as Marx and Engels were wont to point out, are being held back by the former.  While this appears to be a scientific way of claiming that the capitalist mode of production is broken in a functional sense, this barely dodges the problem.  For one thing it ignores the fact that this problem is a logical outcome of the way in which capitalism functions, so is a fact of its working.  For another thing, it places us back into the logical framework where we accept that capitalism worked back in the days when its relations of production were not even close to being outpaced the forces of production––the days of colonial genocide, which can tell us a lot about how the germ of socialism or barbarism was contained in its "rosy dawn."

Although it was the case that the emergence of capitalism brought with it a bourgeois revolution that demystified the world and produced the germ of its own destruction, this is just one side of its dialectical existence that has nothing to do with the brute working-out of its economic logic.  While Marx did indeed note this qualified "progressive" aspect of emergent capitalism, typified by the French Revolution and moments of the European Enlightenment, he also understood that this was thoroughly tainted by capitalism's core logic, its business-as-usual, and was quite clear about this in Capital.  So in this sense, there was never a time when capitalism worked differently for the majority of the world's population: colonialism, "the pedestal of slavery," where "capital comes dripping from head to toe, from every pore, with blood and dirt."  And this is just the permanent reality of capitalism: there was no golden age where it worked differently; it's belle epoque was dependent on this viciousness.

To claim that capitalism is no longer working, then, is to claim that when it seemed to work in the favour of a small population of people, including a particular section of the global working-class, is to simultaneously claim that the way in which it worked (and still works) against the existence of the majority of the world's workers didn't matter.  To assert that "capitalism doesn't work" often leads to the simultaneous assertion that it could still work as long as welfare capitalism for a privileged group of workers could remain perfectly stable.

Worse, though, is to raise the slogan that "capitalism is broken."  At least the assertion that "capitalism doesn't work" possesses some discursive confusion.  To claim that it is broken, however, is to simultaneously claim that there was a period when it was not broken and that it worked differently in this unbroken state.  Moreover, that which is broken can be fixed.  The solution to the social problems encountered under capitalism, then, is one that will make every social democrat happy: the problem is that capitalism, like the untended nature of Milton's paradise, is "out of control" because we haven't worked hard enough to make it work properly; the answer is to simply tinker with capitalism, some form of neo-Keynesianism, and the problem is solved!

Even if such a discourse would go further to declare that "capitalism is broken and cannot be fixed" then, aside from the tactical intentions of such a slogan, it would also be asserting that there was a time when capitalism was not "broken" and that its unbroken logic was somehow different than the logic that it possesses today.  Which is absurd because its logic has not changed and, as aforementioned, the way in which it functioned in the past was just as bad, if not worse, then the way in which it functions now.

Capitalism is obsolete, but things that are obsolete still work––hell, I wrote my entire dissertation on one of the original iMac desktop computers (you know, the ones that looked like candy?) that was woefully out of date but still worked.  Capitalism is cancerous, but nobody would accuse cancer for not working because it was malignant––this is, in fact, precisely how cancer functions as cancer.  Capitalism is not broken but it breaks us… which is why, in the end, it needs to be broken.