I have to say that, aside from the design principles, I have not been a fan of semiotext(e)'s intervention series.  The Invisible Committee's The Coming Insurrection was made more politically significant by Glenn Beck's ravings than any actual movement––even the bourgeois press that wanted the French state to be correct about its supposed "home grown terrorism" has grudgingly admitted that there wasn't any anarchist conspiratorial actions.  Then there are all of the Tiqqun books, the IC's predecessor, that the series is releasing––annoying trash theory that is sometimes, particularly in the case of Theory of the Young-Girl, just misogynist even though the authors would like to pretend, as is typical of this elitist radicalism, that anyone who would charge them with misogyny "doesn't get it." Excuse me while I stifle a yawn.  All of this being said, Sergio González Rodríguez's The Femicide Machine is an exception to what I was beginning to think was the series' rule. 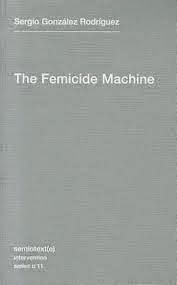 Although I had heard about femicides in Ciudad Juarez earlier, it was not until I read late leftist Chilean/Mexican author Roberto Bolaño's masterwork, 2666, that these events took on a universal tone.  Those familiar with the book in question––the greatest work of the late author, the one his entire life led up to––will be aware that Juarez is represented by a fictional city in the novel.  All of 2666's events circulate around the hideous fact of the fictional Juarez, beginning with a group of literary theorists who are chasing their favourite author to this setting and ending with the brutal story of the author in question who, after experiencing WW2, disappears into this Mexico border city.  At the centre of 2666 is a description of the city itself, a pitiless chronology of misogynist murder.  Most significantly for this review, however, is the fact that the author of The Femicide Machine is also fictionalized in 2666 as a journalist overheard by the black nationalist journalist, Oscar Fate––who is travelling from the US to Mexico to cover a boxing match––and is talking about the way in which the everyday violence of capitalism and colonialism is pushed under the social relations of the state of affairs.

The fictionalization of Rodriguez in 2666 happened because Rodriguez was the progressive journalist and critic of the Juarez femicides––misogynist serial killing that reached a level of political-legal normativity.  Indeed, Rodriguez had written the definitive account of Juarez, Bones in the Desert, which is still only available in Spanish.  The Femicide Machine, commissioned by semiotext(e), is the only book by Rodriguez available in english––the only journalistic-theoretical engagement with the brutal fact of Juarez's serial and misogynist murders.

The Femicide Machine is not a definitive journalistic account, like the author's untranslated work, but a series of theoretical snapshots.  Juarez as a "femicide" machine––how this machine is part of local Mexican comprador politics, how it interacts with the larger vicissitudes of misogyny, how it connects with the dictates of imperialism since it is a primary site of the maquiladora, how it interacts with the "war on drugs" and the "war on terrorism", and how it functions in close proximity to the US border and the waves of migration.

As the comrade who sold me this book pointed out, the significance of Juarez presents a certain level of theoretical difficulty.  On the one hand, if Juarez is unique in its structuralization of femicide, then the theoretical insights have no universal appeal.  On the other hand, if Juarez is not unique then it might become difficult to think through the particularities of the apparent normativity of serial femicide.  Perhaps this conundrum is solved in the intersection between the universal of the particular, where the global fact of imperialist misogyny possesses a regional specificity in the case of Juarez.  Rodriguez appears to think that this specificity can tell us something about more general tendencies of worldwide capitalism.

We thus discover ways in which the Juarez femicides are not only disappeared according to the local mechanisms of Mexican comprador-capitalism, but are also disappeared through the processes of imperialist commodification.  The most cynical example of this disappearing is the MAC cosmetics "Juarez Collection" that debuted in 2010 and was rightly met with disdainful critique.  Gonzalez notes that the spectacle of a cosmetic line based on femicide was a way to disappear the actual victims of the most vicious structural misogyny––here they became fodder for an ironic beauty campaign where women outside of the particular theatre of murder were supposed to adorn themselves as literal victims.  Maquiladora workers who, because they are women, are already designated as "whores" by a macho culture and relegated to machine of femicide, find themselves murdered again in a spectacular cosmetics campaign.

Misogyny is normative. Although it emerges in its most violent and despicable form in those zones that exist in the peripheries, it persists elsewhere, often rippling out from these border zones into the global centres in a commodified manner.  US cities might pride themselves on not endorsing a culture of serial femicide, but the US as a whole sure as hell can celebrate these femicides in its beauty industry.

What is most haunting about this book is the way in which it concludes.  After the various windows into Ciudad Juarez's function as a zone of border comprador-capitalism, we are provided with a paradigmatic femicide.  A series of pictureless descriptions of photographs of a significant victim, the mother of whom founded the primary anti-femicide organization in Juarez.  These descriptions are book-ended between the mother's story of her annihilated daughter and an epilogue of the state's attempt to murder the mother for daring to challenge its right to persist in these murders.  And Juarez continues to weigh like a nightmare on the brains of the living.