January 04, 2014
Since it is the beginning of 2014, it is once again time for the annual MLM Mayhem year in review––that is, the article where I list the posts with the most traffic in the preceding year in a shameless attempt to rekindle interest in now stale writing.  (Also, it prevents me from having to write an original post!) So, from least to most popular, I have linked and summarized the ten most read (or, at least page-viewed) articles of 2013. 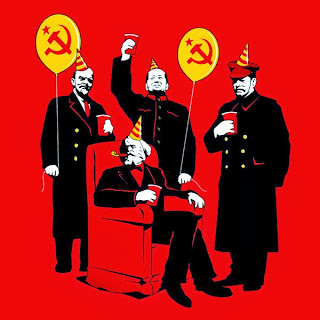 Although it was written in December 2013, this piece has already become the tenth most popular post of 2013.  My obituary articles are usually enjoyable to write because they give me time to reflect on the contribution (or in other cases the lack of contribution) of certain people to history.  2013 was interesting insofar as two world historical figures, whatever their problems, died: Mandela and Giap, and I regret missing the opportunity to reflect on the life of the former.

9. The Masses are Not Ready?

This hastily article was reposted on various sites, stirring up some debate that I felt was somewhat tangental to what I was actually problematizing.  Had I known that it would be as popular as it was I probably would have expended more energy in making my position clear and working to transform it more it into a stronger and clearer argument.  Due to the nature of this blog, and my propensity to slip more into ranting than writing proper essays (I write the former as part of my academic life and the blog is supposed to be "fun"!), I am sometimes in the awkward position of having to clarify positions that some people misunderstand due to the broad gestures of my 12 am blogging.

Some enjoyed my series on the phenomenon called (rightly or wrongly) "Stalinism" and some hated it, though the latter group's spite was based primarily on the fact that they only read the first entry of a three part series and made some bizarre assumptions about what I was claiming.  For example, on the liberalism reddit––oops, I mean the socialism reddit––some ortho-trots complained that I was arguing for the old position that Trotskyists were "wreckers" when, in fact, I only brought up this argument as a counterpoint to the argument that Stalinists betrayed the Russian revolution and that both claims are problematic.

Moreover, there were those dodgy liberal bloggers who sometimes read my blog only to complain about it (one person in particular who likes to blog, now and then, about how stupid I am and yet has never succeeded in making a very good argument against my positions either on this blog in the past or on their own bland website), who thought that my refusal to accept the discourse of Stalin-as-mass-murderer was tantamount to genocide denial.  Of course, my refusal is based on acceptable academic research and not a "common sense" pop-culture discourse that is hegemonic at the centres of capitalism.  And no, you aren't really counter-cultural to claim that you are defying some normative position about Stalin when you endorse the Robert Conquest position that is pretty much the ruling class view promoted in US high school textbooks; if you think there is some pro-Stalinist conspiracy out there in the world then you are living in a magical land of unicorns and rainbows… Generally your problem is that you don't like proper historical scholarship (for this is where there is an agreement that the Stalin-as-mass-murderer discourse is problematic) and confusing academic scholarship with popular ideas, or at least demanding that the former coincide with the latter.  There is a similar logic here to thinking that there is a feminist conspiracy to silence men, etc.

In any case, would that people would have read through to the end of the series rather than focusing only on the introduction…

7.  What is a Theoretical Terrain?

This post was a PDF download of one of my aborted piece of writings that came out of a manuscript I was (and still am) working on.  Originally I didn't know what to do with it, but didn't want it to completely die, so I posted it on this blog in order to give it some life.  Since then I have discovered what I want to do with it, and it is being reincorporated back into the manuscript from which it was extracted (though in a somewhat retooled form), so I might end up removing it from this blog whenever I finish the manuscript and submit it for publication.

Connected to a successive (but much less popular) post about making communism hip, this was a semi-humorous piece about accumulating revolutionary forces.  Part of it was aimed at lampooning the preponderance of some internet marxists to complain about the "irrelevance" of historical communist symbology (i.e. the hammer and sickle) and their obsessive search for new "relevant" signifiers.

5.  Communism is Marxism is Communism

Written due to a rather annoying trend of non-marxist communists to complain that Marx appropriated the term, that Marxist-Leninists are "squatting" on the term, and that the concept is broader than Marxism.  While there is some truth in this claim, I decided to write an article that, in the words of Althusser regarding his young/old Marx scission, attempted to bend the stick back too far in the other direction in order to correct a philosophical problem.  The general point of this article is connected to one of my long-standing academic concerns in my own discipline (and one we philosophers obsess too much about): the distinction between name and concept and the belief that communism only becomes a significant world historical concept, breaking from the previous and similar concepts connected to the same name, when it is inscribed by the content of Marx and Engels' Communist Manifesto.

This piece was written in the wake of Thatcher's death, inspired by all the liberal lefties angered by those who were celebrating this reactionary scum's demise.  Intended to critique a liberal conception of morality that is sometimes imported into socialist discourse––a moralism that believes the strength of socialism rests in its moral high ground––I also examined the problem of liberal humanism and the need to move beyond this way of thinking about the world.

But not to liberals and reactionaries!  No, seriously, this piece was somewhat self-critical in that it was meant to identify a problem many of us leftists exhibit, particularly to each other and the masses, that needs to be overcome.  None of this is to say that we shouldn't be principled, or that our critique should not be sharp and pointed when necessary, only that our behaviour towards the masses and activist cliqueishness could do with a dose of humility.  Otherwise I'm all for the polemical snark and have little patience for the smarm.

2.  Why I Sometimes Think that "Gulags" Might be a Good Idea

Good lord people, try to read more than just the title of a piece before deciding you know what the position of an article actually is!  But it was rather funny to see this posted on several comment sites and read comments that were clearly based only on the title (and even then didn't seem to get that the words "sometimes" and "might" should have grammatically indicated that I wasn't claiming "gulags are a good idea") since they were all outraged: "this asshole is seriously arguing that we need to have prison camps?"  No, I wasn't: hey you, mainstream internet leftist, get a sense of humour and learn how to read!  Besides the occasional tongue-and-cheek aspect of this post was meant to address the fact that sometimes all of us would like to banish our class enemies to execution squads and prison camps and, though I definitely do not think this is a good idea, I was interested in interrogating why such a "solution" is conceptualized in the first place as it was historically.

Also, since I mentioned MRA reactionaries as people I sometimes think should be gulaged, I received yet another glorious comment (where I was called a "faggot" and a "mangina") that kind of proved my point.

I think this piece is pretty self-explanatory since it has been posted/reposted all over the place and discussed in multiple comment strings.  For those coming to it for the first time, however, I would like to qualify that this is a summation of a lot of earlier articles that provide more substantial background to my position––a summation intended to present a way forward and a succinct summary of the problematic presented by so-called "identity politics".  I would urge people to read the back-links (they are in there for a reason) as well as realize that, as should be clear from these back-links, my critique and rejection of identity politics is not premised on the assumption we should lose ourselves in some "white boy" marxism with an idea of class that is yet another form of identity politics (as I argue in this piece and elsewhere) but rather to learn from the emergence of identity politics––to accept that it actually has something to teach us––but realize it cannot answer the questions it is posing according to its own theoretical foundations.

Anyhow, that is this blog's past year in a nutshell.  Thanks again for all the commenters, readers, and supporters who have helped make MLM Mayhem better each year.  One thing I am interested in doing in the upcoming year is to allow more guest posting, since I haven't had a guest post for over a year and because other people know more about some topics I either neglect or discuss in a partial and vague manner.  If you are interested in contributing a post [note that, because this blog is also connected to a political project, you should have similar or sympathetic politics to Marxism-Leninism-Maoism], then send me a proposal.  Finally, if you have expendable cash and want to support my unpaid intellectual labour on this site, please donate.