January 08, 2011
What is going on with this contemporary wave of anti-communist films, all of which receive critical acclaim by the reptile press no matter how inaccurate and/or self-righteously misleading they might be.  Clearly capitalism is yet again being discredited, its current crisis and spate of imperialist wars potentially revealing the limits of its logic.  Perhaps these films are a reflection of the ruling class fear of its destruction.  They can only bash Political Islam so much––global capitalism is not really afraid of a movement that is mildly anti-imperialist at best and pro-capitalist at worse.  The promotion of the most vile Islamophobia is merely an expression [and a racist expression] of the need to scapegoat a population in order to justify imperialist intervention.  The current renewal of anti-communist propaganda, however, speaks to ruling class ideology's need to defend the horrors of capitalism by reminding us of "failed communism" so that we can all agree that we are indeed living at the end of history.

At least the anti-communist movies produced during the cold war had much more variety than today's pretentious pseudo-arthouse fare.  I have many nostalgiac memories of Red Dawn where the Cuban-backed brown people communists somehow took over America only to be defeated by a highschool Texan football team.  Wolverines!!  Or what about anti-communist television shows?  Like how the A-Team foiled KGB spies, sometimes recruiting troubled youth or senior citizens, ever single week.  And then there were the best-selling anti-communist spy novels, exemplified by Tom Clancy and his formulaic hatred of the Soviets (unless he was writing about the IRA).  But no.  Today we have "critically acclaimed" but pretentious predictability, all raising the shibboleth of cold war propaganda.

Leaving aside the fact that these films are criticizing regimes that had already degenerated and were moving towards state capitalism, I am mostly concerned with this spate of anti-communism because of what it represents: the fearful and calculated need to remind us that there is no point in being anti-capitalist because capitalism is the end of all progress and historical self-determination. 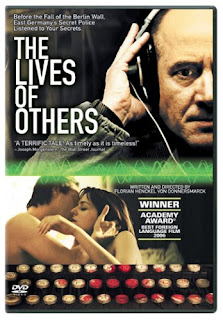 Everyone is supposed to love this movie.  We're supposed to cry at the Stasi agent's sacrifice, the tragic ending, and agree that the censorship practices of the GDR prove how communism can be nothing but anti-human.  Remember how that wall came down over two decades ago?  Here's the reason why.

And yet West Germany was equally repressive at that period in time, with a police and military force run by former members of the Gestapo and SS (unlike East Germany, the American-backed West Germans did not, as Justice in Nuremburg pretends, get rid of its Nazis - rather it put them back into positions of power).  A police force that could be just as vicious as the Stasi in its desire to enforce state hegemony: hence the murdering of student activists, hence the war on the streets against the RAF and other groups, hence a prison built specially to contain dissidents (Stammheim), and hence the fact that just as many West Germans were trying to cross to the East as East Germans to the West: both sides seemed to think the other side, for whatever idealized reason, was a paradise.

Also there's the fact that the movie utterly misrepresented the censorship practices of the GDR, as people who lived in the GDR have pointed out in their critiques of the film.  Earlier in this blog I mentioned how the capitalist states were (and are) just as censorious as the communists, but movies like this continuously reinforce the lie that the capitalist world possessed more freedoms when it came to the arts.  Again, this is not to say that there were not censorship practices in the GDR that should be critiqued, just that the ideology of this film is intensely hypocritical––a theme in all of the modern anti-communist films.  Moreover, the fall of the wall, though first experienced by people on both sides as a moment of elation when a city was no longer divided, led to horrific experiences for many people from the former GDR: loss of guaranteed housing and food and thus a successive rise of homelessness a common experience for many. 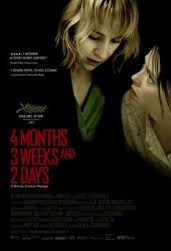 A movie about the anti-abortion laws in Nicolae Ceausescu's Romania is a problem not because Ceausescu's Romania was not anti-abortion and repressive but because of the entire topic of abortion and communism.   First of all, it's hilariously hypocritical that this film was celebrated by American critics when America has a crazy religious right movement that wants to ban abortion, and goes to great lengths to repeal birth control laws.

Secondly, Ceausescu's anti-women laws aside, the film is a hypocritical because it makes it seem like communism is essentially anti-abortion when the first two places where abortion was legalized in the entire world were Soviet Russia and then Communist China.  And this happened far in advance to legal access to abortion in Europe and North America.  In fact, the early communist stance on birth control was used in early anti-communist propaganda to demonstrate how communism was against the family and wanted to murder children.  This film, however, uses the example of the degenerated Romanian socialism to generalize––at least in the minds of the viewers but this is always important––the hypocritical conceit that only capitalism permitted abortion rights. 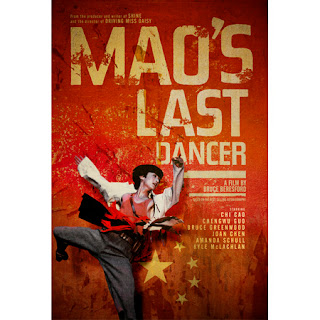 Generally speaking, the story is about how a dancer is happier being recognized as a famous individual in the United States with material privileges over other individuals, rather than being treated equally––and as no more important––than other individuals.  We are supposed to despise the Chinese communists of the Mao era for preventing and individual to maximize his utility at the expense of others: equality is apparently very anti-freedom.  The fact that a peasant was given the funding to study dance in the United States, a privilege that every peasant pre-revolution could not even imagine, should tell us something about revolutionary China's success in closing the gap between the cities and the countryside.  Instead, the government is made to look bad by asking the dancer to return to China so he can help with the development of national culture and, perhaps, even teach other peasants what he has learned. 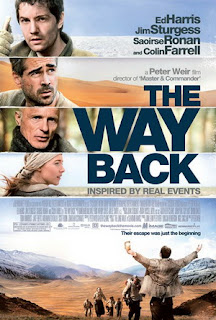 This film has not yet been released, but the subject demonstrates the worst type of American hypocrisy in this current wave of anti-communist furor.  Clearly the gulag system was extremely problematic, but this film refers to the system in the trailer as "the world's most brutal prison system."  This in context of the American prison system that incarcerates more people than any other system world wide and has been critiqued by abolitions like Angela Y. Davis for this very reason.

The United States has incarcerated just as many political prisoners, and has murdered its political dissidents, and yet it wants us to believe, with this Hollywood film, that its racist and imperialist prison industrial complex is non-existent or at least nothing compared to the gulags.  Moreover, how can anyone claim that the gulags are the "most brutal" prison system in comparison to the Nazi system of incarceration––was Auschwitz tame compared to Siberia?  Authors like Arthur Koestler and Alexandr Solzhenitsyn would have us think so––the former responsible for making up, without statistics, the 25-20 million statistic and the latter a right wing conservative (and yet whose numbers, by the way, were far less than Koestler's).  And yet respected historians of that period, and not pro-communist let alone pro-Stalinist historians, have never accepted those statistics.  See, for example Oleg V. Khlevniuk's History of the Gulag.

Not that the gulag system should be apologized for: the problem, however, is that the attack on this system is being made in a Hollywood film (that looks like it will be critically acclaimed) about a prison system that is no longer in existence and in a context where an actually existing prison system is, globally speaking, the worst of its kind.  Forget about those Abu Ghraibs, Guantonemos, or African American political prisoners we've locked away since the Civil Rights movement for taking up arms against the Klan, we are being told, and think about this prison system and how it's always worse elsewhere...


For those of us who want our anti-communist nostalgia without all the saccharine tear-jerking of the above films, there's a REMAKE of Red Dawn being produced as we speak.  This time the bad guys are Chinese because anti-communist propaganda is always better with a racist dimension and North America has been obsessed with the "yellow peril" ever since its genocidal settler days.  Apparently someone forgot to mention to whoever is making this film that China hasn't been a communist country since the Dengist coup in 1976 and, since then, has been openly pursuing free market reforms.  Oh well, at least a Texan football team will be able to kick pinko ass again.