The Perils of Confusing Liberty with Freedom

October 31, 2010
Liberty is not synonymous with freedom. It is a sub-species of freedom, but a rather limited one. The slogan of the French Revolution, for example, is a slogan that is closer to freedom than the slogan of the American Secession. "Life, Liberty, and the Pursuit of Happiness" is really only a definition of liberty, but "Liberty, Equality, Fraternity" is a closer definition of freedom - as long as we add "Sorority" or substitute "Fraternity" with "Camaraderie."

In any case, some rather absurd definitions of "freedom" result from believing it is defined as "liberty." This is mainly why libertarians continue to exist, philosophically speaking: their entire ideology is based on category mistake. (Philosophically speaking: they also continue to exist because as long as there are selfish jerks there will be libertarians.)


1. Taxes that lead to public services violate my "freedom"

This one is the most obvious confusion, leading to the most irrational definitions of freedom. And yet people still make this argument. It is one thing to question some of the fundamental problems with taxation (such as why I'm paying to fund imperialism and bourgeois politicians), but you have to give it to the libertarians - at least they're consistent about their liberty-freedom confusion in this instant.

The public fire service needs to go because it is my freedom to die in a fire if I so choose. Maybe I'm missing something here, but when I think of being free I really don't imagine the liberation of burning to death in a fire. But hey, I guess it's my personal frikking choice to die in a fire and those fire-fighters, funded by my damn taxes, are violating my free choice! 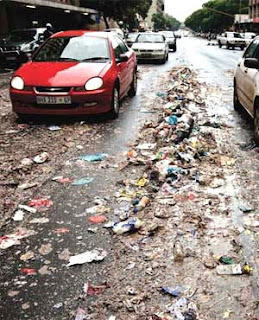 Publicly funded garbage workers are also collectivist goons, totalitarian assholes organized to deny my personal freedom. Paying for garbage services should be a person to person choice. And I shouldn't have to pay for some other guy to get his garbage removed - that's his business. Wasn't it so much more free in the days before state-funded garbage disposal when people threw their excrement on the street and rats spread the plague? But that's the price of freedom, my friend: don't you know that "freedom isn't free?"

While it may be true that letting idiots get away with doing unsafe things out of their pursuit of liberty is pretty harmless, waving the flag of private safety over public safety becomes rather ludicrous.

Are you telling me I don't have the right to die in a hideous traffic accident if I do not want to wear my helmet on my motorbike? It is my personal freedom to not wear a stupid helmet, because it is so uncool, and die of sever head trauma. Nor should my personal freedoms ever be violated by the nanny-state arresting or fining me for driving under the influence: my body, my car. So what if someone else dies because of my God-given right to exercise my freedom? That's there fault for not using their freedom wisely and getting out the way of my car. This is the price, I'm afraid, of "true" freedom. 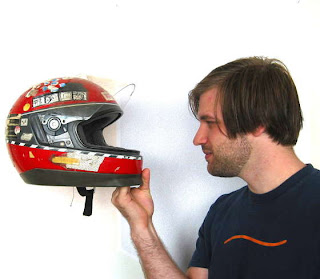 "I refuse to wear you, Mr. Helmet, because you are oppressive, a collectivist shackle on my individual freedom." 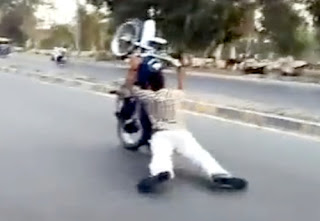 The way these have recently been pursued, in the most limited limited sense, in my country has led to a rather absurd outcry from home owners, land-lords, and religious kooks who think that global warming is a leftwing conspiracy. The idea that maybe we should pursue the type of society that would lead to sustainable existence does not seem to matter for those who pursue liberty:their tiny blip on human history's aeons-long radar is clearly more important than human history itself.

Thank god there's not too many of these! Can you imagine some totalitarian state actually deciding that the preserving the earth for future generations is more important than my freedom to drive my awesome SUV and drink all of my coffees in disposable cups. (What, you're going to make me use a reusable bag for my groceries instead of the plastic ones that you used to give out for free? Oh, I can still pay for those bags - well that's okay then.)

Besides, we all know that climate change is a bunch of garbage invented by anti-freedom pinko scientists in an effort to erode our life, liberty and pursuit of happiness. Next they will be telling us that the sun does not rotate around the earth. (Oh they did that centuries ago? See what I mean!!)

Since liberty is primarily about personal freedom and property rights, I suppose the confusion with liberty and freedom explains the guns-equals-freedom issue. It really can't be that gun nuts think it is liberating to shoot people, can it? 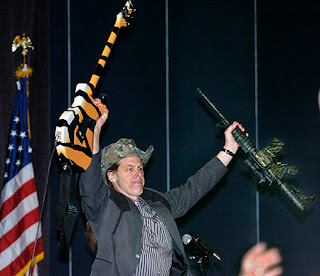 It is my freedom to arm myself and protect my tiny apartment from big government interference. Guns and guitars are freedom, as my hero Ted Nugent demonstrates in this picture. Yeah, woo! FREEDOM! [insert catchy riff here]

But we should also stop revolutionary organizations from amassing arms because that's not freedom!

The confusion with liberty and freedom clearly leads to the problematic believe that any affirmative action laws, no matter how ineffectual these laws may be, are an assault on personal freedom. Since liberty is a concept connected to the individual, a blindness to social freedom follows.

Are you telling me that merit no longer matters? You oppressive goons with your laws that prevent the hard working individual from following a freely chosen path. So what if there was slavery and stuff centuries ago, racism has nothing to do with me! Now give me that bloody job before I exercise my freedom and shoot you with my gun and, I don't know, drive off on my motor-bike completely blitzed without a helmet.

And while we're at it, how dare you have equity laws that prevent me from saying [racist-and-or-misogynist-word] whenever I want! I want to pursue the happiness of saying whatever I want no matter who it offends, or what it promotes.

The liberty-freedom confusion becomes utterly absurd when the concept of freedom is applied to something that is not alive, thus demonstrating the hypostatization fallacy that every libertarian takes as a priori.

And the fact that the government had to bail out the banks is just crony-capitalism and not real, free capitalism. Or maybe it's a good thing because it's saving the market. Or maybe I don't know what I'm talking about except that you should just accept your homelessness as the price for true freedom. I mean, where would you be if you couldn't participate freely in the market? In some communist slave state that's where... oh, you can't participate in the market because the crisis liquidated your bank account and credit agencies are hunting you down as we speak? Don't blame me for not taking your freedom seriously! 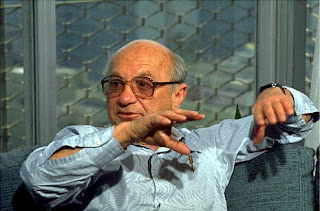 (The market and its hands no longer invisible, manifesting briefly in the incarnation of Milton Friedman.)