Yet Again the Weight of Mount Tai: Farewell Comrade Mateo

After a long struggle with cancer my friend and comrade, Mateo Andante, has passed. Mateo was a Maoist organizer in LA with a long history of class struggle work. He was also the creator of the Bourgeois Philosophy website and, among many other things, one of my co-authors of On Necrocapitalism. Although I knew him only through his online presence, long message and email exchanges about politics and philosophy, a blurb he wrote for Demarcation and Demystification, collaboration on the aforementioned necrocapitalism book project, and a joint interview on a podcast resulted in a closer relationship than the relationship I share with some people I know in the offline world.

Months before learning of his passing, I had in fact resigned myself to Mateo's death. At the beginning of December he announced that things were bleak and that his current wave of chemo treatments might not succeed. I did not hear from him for months after this announcement and, having received no replies to my concerned inquiries, assumed he had already passed. At the end of February, however, I received a brief message from Mateo: "I'll be passing soon. All our co-authors are welcome at the small service in LA." I responded immediately––passing along my immediate condolences and sadness, asking if I could help with his own book project that was still unfinished so that he would have it as a legacy––but that was his last message, a simple goodbye. Today I was contacted by a friend who was tasked with "collecting the pieces of his life" and informed that Mateo had indeed passed. 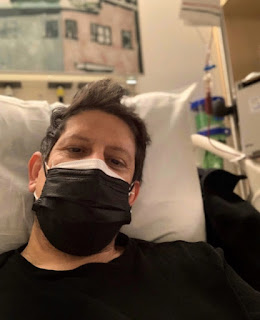 So I want to say a few words about Mateo, in order to mark his passing, though they will doubtlessly be jumbled and imperfect as I'm still in mourning. How does one mourn someone who was both close and distant? Close in terms of the political and philosophical friendship shared across social media debates, direct messages, email strings, online book collaborations, a couple video zoom meetings, and a shared podcast. Distant because, though I did meet him virtually, we never met up in real life since we were on opposite sides of the continent in different time zones. I did not know his family or political community, though I knew of them, and it was not as if I could be a more concrete comrade due to the fact that online discussion required silence about our respective organizational activities. I had hoped to meet Mateo in real life but the opportunity could not be realized. I'm thus mourning a person who I got to know very well on the one end, but knew very little about on the other. A person I never really met face to face although, unlike so many people I know face to face, we worked together as part of an authorial collective which is a relationship with its own kind of intimacy.

I first met Mateo in 2017 through the many ML/MLM debates that were circulating on Twitter. At one point we were on the same Maoist discussion forum. He was a slightly older Maoist (around ten years my senior) with a background as an organizer for the Maoist Internationalist Movement (MIM). Despite his past as a member of one of the most well known Maoist Third Worldist organizations, he had walked away from that experience with both an appreciation of some of its critical interventions and a critique of Maoist Third Worldism and what he saw as the dogmatism that had harmed MIM in its final days. Due to this experience his politics had moved more towards the Maoism expressed by the groups associated with RIM, coupled with some of the concepts he had learned from MIM and still thought valuable, as well as a rigorous antipathy towards the ways in which dogmatism can undermine organizing. He consistently demonstrated a dedication towards preserving the scientific aspect of MLM while also, in opposition to the dogmatism that would render this aspect static, an interest in creative theoretical investigation. But even this interest was guided by a staunch commitment to class politics.

What led to my friendship with Mateo, however, was his background as an academic philosopher. Like me, he had pursued his doctorate in philosophy and had a lot to say about the ways in which bourgeois ideology determines and structures philosophical departments. Indeed, his website Bourgeois Philosophy was a series of interventions about the class politics of academic philosophy, shapshots into the (still unpublished) book he had been working on for years about this same topic. What I found most interesting about this background, however, was that, unlike me, his academic training was in that area that the analytic philosophical tradition has over-valorized: Logic and Math. That is, Mateo was Logician and Mathematician who was also a revolutionary communist. Nor was this training something he simply discarded when he left academia. One of his twitter accounts was @logicians where he would not only tweet about current information regarding logic and math, but where he would also argue against reactionary appeals to logic and science and assert that logic should be in the service of class struggle.

Since the majority of Logicians I know do not possess the kind of politics Mateo possessed––and most of them are horrified by the notion of dialectical logic––I was of course intrigued. And I learned a lot from him because of this background. For example, back in the spring of 2021 I was reading Jean Cavaillès' On the Logic and Theory of Science and found large parts of it difficult since it was outside of the area of my academic expertise. So, because this difficulty pertained to logic and mathematics, I sent Mateo a query and, as expected, he was both familiar with Cavaillès and the debates in question: he explained the text's background, the relevant meaning of logic and math that I was missing, the history of debates in this area, and in a way that made sense to someone who hadn't studied these areas of thought. At this moment I'm looking at this specific email exchange again and feeling his loss. The voice behind that reply has been irrevocably silenced; I will never hear it again. Nor will anyone else.

One longstanding conversation Mateo and I shared was on the vocation of the philosopher and the institution of philosophy. We were both concerned with the need for a partisan philosophy of class struggle and how the academic institutionalization of philosophy was overdetermined by bourgeois partisanship. We would discuss both the problem of anti-intellectualism in revolutionary circles that was partially generated by the pseudo-intellectualism of bourgeois philosophy. This conversation led to discussions about our respective positions: I was still in dialogue with academia, though as a radical on the fringes, while he had departed academia due to frustration. We were never opposed to our different positions, or argued against each others' choices, because we were united on the fundamental questions. We understood our respective choices because we shared the same partisan commitment, and we informed each other from these different positions. He was happy with my book on philosophy, Demarcation and Demystification, and even wrote a glowing blurb for it. At the same time he was working, as aforementioned, on a manuscript about the bourgeois partisan structure of academic philosophy that I truly hoped would see publication. Alas, he died before completing this life project although I hope to encounter the unfinished manuscript and help it receive publication.

As noted, my virtual relationship with Mateo was such that we could not really talk about our organizational commitments or really know each others' concrete communities. But where we became really close, alongside others, was with the On Necrocapitalism project. Mateo was on of the six authors, including myself, who generated this living chain theoretical engagement with the pandemic's politics. Despite the fact that his cancer was in resurgence during the course of this project's construction, Mateo cranked out a chapter whenever it was his turn. He also participated in the zoom meetings regarding the book's direction, thus allowing me to put a face to the abstract voice I had known for years, and was involved in the book's collective edits for eventual publication. In this way, I got to know him better as member of a collective, as someone I was working alongside of. In fact, Mateo was the first representative of this authorial collective––he took all of our collective notes an represented them––on the initial podcast interview of this project. And then, when the book was finished and right when he was returning to serious chemo treatments, Mateo participated in another podcast interview about the book alongside myself. I am very happy that I was able to be part of this last interview with the comrade in a project we were both a part of as comrades.

I truly wish I could have been able to meet Mateo in real life, that our concrete organizational paths could have actually collided, but now he is gone. And what a loss this is. I know I keep repeating Mao's claim about how some deaths are "weightier than Mount Tai" but, yet again, this feels very true. Another comrade gone and I feel the weight left by their absence. An absence generated by the lost contribution of their experience, of the important projects their death cut short. Of a very real political relationship terminated too soon.