On the same date as the 1973 coup in Chile, one of the great revolutionaries of the 21st Century, Abimael Guzmán ("Gonzalo"), has passed away at 86 after having spent nearly three decades incarcerated. As the Chair of the Communist Party of Peru's (PCP) Central Committee, Gonzalo was responsible for leading the People's War in Peru and initiating the theorization of Maoism as a third stage of revolutionary science. Moreover, the now defunct Revolutionary Internationalist Movement responsible for crystallizing Marxism-Leninism-Maoism (as opposed to "Mao Zedong Thought") was only able to reach the ideological and organizational heights it once had due to the participation and influence of the Gonzalo-led PCP. For those of us who all ourselves "Maoists" because we recognize Maoism as a development in the same sense that Leninism was (however we position ourselves in the international debate about the meaning of MLM now) there is no avoiding or denying the significance of Gonzalo. 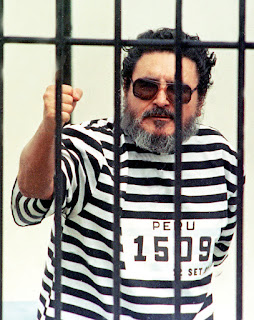 As I have said in different ways and multiple times, what do we make of the fact that right when capitalism was declaring itself the "end of history" and trumpeting the defeat of communism, the revolutionaries in Peru launched a People's War and declared a renewal of communism by stating that there was a new stage in revolutionary science? At the very least we should recognize it as heroic, and for those of us who are Maoists we should recognize it as a theoretical milestone.

Unfortunately, and yet predictably, Gonzalo's legacy falls under the heavy shadow of bourgeois propaganda. Directly following his death, every single mainstream news outlet reported his death according to the anti-communist discourse regarding the PCP after its failed revolution and Gonzalo's capture. Monstrous, evil, bloody: another communist devil deserving decades of incarceration and death. As should be expected, they rehashed a number of the lies created by a combination of Fujimori-era propaganda, "Senderologist" analysis (generated by the likes of Orin Starn, the Robert Conquest of Peru), a compromised Truth and Reconciliation Committee report (a committee staffed by enemies of the People's War, actors far from neutral), and the disaffection of a population who experienced the dislocation of a revolutionary movement with nothing to show for it now. When I read, in multiple mainstream news outlets, that Gonzalo was a "messianic" or "apocalyptic" figure, or that he referred to himself as "the fourth sword of Marxism" I immediately laugh: these were the silly claims made by propagandists that are found nowhere in his writing or the writing of the PCP. But this is precisely what happens with failed revolutionaries. We know already what happens with those revolutionaries whose movements were successful but still reached a catastrophic moment where the successes were overburdened by failure: that is, for example, we know how Mao and his legacy are treated by bourgeois ideology. An even worse fate awaits those revolutionaries who failed, despite coming close, to seize state power: the state that was successful, and its imperialist allies, will work overtime to besmirch the very memory of this challenge so as to render the possibility of making revolution morally monstrous.

Indeed, the problem with a failed revolution is that it's easy to find mistakes and excesses that fit with the dominant narrative. Revolutions that were successful, that were able to seize hegemony and determine the narrative (even if this was temporary before a counter-revolution), generate the kind of literature and analysis, even about their own mistakes and excesses, than those that are less successful. Because every revolution will have, within its sequence, mistakes and excesses that are just part of the messy reality of oppressed people struggling against their oppression and dealing with the weight of contradictions that is the legacy of this oppression. So when it comes to Gonzalo and the PCP, these mistakes and excesses cohere with the Lucanamarca massacre of 1983 (which happened years before the PCP achieved strategic equilibrium) which they not only admitted were excessive, and tried to explain the reasons behind them, but ended up being held to account for because they failed to win the People's War.

And yet every revolutionary movement, even the successful ones, have stories of excesses and mistakes. For example, the Saint-Domingue Revolution (Haiti) has multiple stories of excessive revolutionary violence, still documented by historians, that are far worse than what the "Sendero Luminoso"did in Lucanamarca. In The Black Jacobins, C.L.R. James discusses the violence the former slaves delivered upon the white slave-holding population, including children and babies, and simply shrugs it aside by declaring that, in comparison to slavery, this violence was "surprisingly moderate." In a later footnote to this claim he writes: "This statement has been criticized. I stand by it." And Lewis Gordon, in his essay Fanon's Tragic Revolutionary Violence reiterates these claims by C.L.R. James, upholds them, and notes that the asymmetry between the violence of the oppressors and oppressed always leads to the condemnation of the violence of the latter, rather than the former, whereas the latter is simply the tragic result of the former.

All of this is to say that even those revolutions that have succeeded in seizing state power, upon failing to overthrow world capitalism, are still held to account. Are still dragged through the mud. Are still subjected to vicious imperialist propaganda. So it should not be surprising that a revolution that came close to overthrowing its state of affairs but failed should be subjected to an even worse constellation of propaganda. That its principal theorist could die, after nearly three decades of incarceration, and still be demonized despite having been part of a popular revolution. And if you still find "leftists" telling us to "listen to Cubans" or "listen to Venezuelans" (meaning Miami Cubans and anti-Chavez cosmopolitans, respectively) regarding pro-imperialist narratives regarding even revisionist or reformist states of affairs, you will sure as hell get a similar population shitting on the People's War in Peru and demanding we celebrate the death of its leading light.

Well, back to Gonzalo's importance. Our Gonzalo, our initiator of contemporary Maoism. We know that anti-communists will tell lies about his legacy; after all, he died after being incarcerated for nearly thirty years, and was muzzled within this time. For those of us within the Maoist camp Gonzalo is divisive for other reasons: some of us see him as part of a process of the development of MLM, others see him as the only meaningful source of MLM. I side with the former camp and see the latter camp as dogmatic, and have provided reasons for this perspective in what I have written on this blog and published elsewhere. But regardless of this debate within the contemporary Maoist camp––a debate to which he can no longer contribute due to his death––the shared fact is that a very significant revolutionary has just died. Attempts to undermine his significance, to paint him as an evil cipher of apocalyptic violence, are precisely what reactionaries do with every challenge to their state of affairs. And our task, if we claim to be revolutionaries, is to reject this reactionary imaginary and support every revolutionary assault upon capitalist business as usual.

At the end of the 20th Century Gonzalo initiated one of the great assaults upon the world capitalist imaginary. He became the leader of a People's War that declared a new stage of communism in the face of the so-called "end of history" and initiated a debate, globally, about the meaning of revolutionary science––inspiring revolutionary movements elsewhere. And then he was captured, the movement he chaired fragmented and largely dissolved, and now he has died after years of incarceration. We owe it to his memory, however some of us might disagree on this memory, to make revolution now. To make the world a better place.