On the Passing of Comrade Zia

July 12, 2020
As many of my readers will be aware, Comrade Zia of the Communist (Maoist) Party of Afghanistan [CmPA] recently passed away. Zia was not only the chairperson of the CmPA's Central Committee, but he was instrumental in building the contemporary Maoist movement in Afghanistan and played a key role in the construction of the international Maoist movement. He was not only involved in building the now defunct Revolutionary Internationalist Movement [RIM] but, with the CmPA and other former member groups of the RIM, played a leading role in the line struggle against the rightist line that cohered around the RCP-USA and that led to the RIM's dissolution. Indeed, one of the two major responses to the RCP-USA's "new synthesis" was likely written by Zia (the other being Ajith's Against Avakianism). Since then, the CmPA's attempts to help rebuild a new Maoist international was recognized as significant and exemplary by Maoists everywhere, as the obituaries from multiple Maoist parties (including ones the CmPA was in non-antagonistic line struggle with) demonstrated.

Obviously I never knew Comrade Zia personally. I never travelled to Afghanistan and, being a public supporter of the Maoist movement, I would have had no reason to meet the leadership of a clandestine revolutionary organization in an occupied country. But I did know about the movement from international supporters, visitors, and exiles. I hosted some of the interviews and interventions on this blog; I learned about the vitality of the movement in Afghanistan––a vitality that is undermined by translation difficulties––from people who did travel. And I was able to pass some of my early work to the comrades there through a chain of amorphous contacts. My book Continuity and Rupture took its title from the aforelinked response to the RCP-USA (and quoted that document, using one quotation as an epigraph), and was in fact influenced by its dialectical approach to the scientific development of Marxism-Leninism-Maoism.

Months before Zia died, however, I was looking for a blurb for my small book with Foreign Languages Press [FLP], Critique of Maoist Reason, and I reached out through that same amorphous string of contacts to the CmPA. I figured that it made more sense for a revolutionary organization to read and blurb this kind of book rather than anyone else. I didn't think I would get a response and, since both myself and FLP heard nothing from the CmPA before the deadline of the book's first printing, it went to publication without the requested blurb. But then, just as the book was being printed, I received a message that the CmPA had read the book and was provided with their blurb. This was the first time I saw the name "Zia" in print since the blurb was written by Comrade Zia. I did not know who that was at the time, other than he was connected to the CmPA, and only with the news of his death did I discover how meaningful this blurb was: the leading architect of the Maoist movement in Afghanistan had taken time to read my book and write a small paragraph of appreciation. Although it came too late, FLP agreed to put it on the website and attach it to the next printing––and the second printing of Critique of Maoist Reason actually coincided with Zia's death, revealing the meaningfulness of the blurb. I'm still taken aback at how I was honoured by his appraisal of my work, that he bothered to read it in his last days, despite knowing me only through a vague chain of international communist contacts. 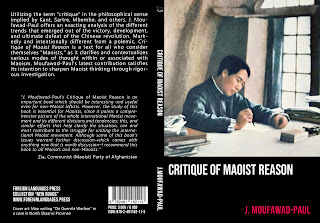 I am humbled that one of Comrade Zia's last communiques is a blurb on the back of my book. I hope to live up to his example. I wish that I had lived the kind of life that would have placed me in direct contact with him. But more importantly, and based on the many obituaries of his role in the international Maoist movement I have now read, I am inspired by the life he lived and hope others are similarly inspired.