The Riots and Bourgeois Ideologues

June 09, 2020
Just as the riots responding to the pig execution of George Floyd have revealed the racist violence of the settler-capitalist state––that in the midst of a pandemic the ruling class is willing to spend more on police repression than healthcare, to murder those upset by police murder while tolerating reactionaries demanding that the economy start up again––it has also revealed the poverty of liberal thought, and particularly (in the case of this blog post) the poverty of mainstream academic "political philosophy". After all, institutionalized political philosophy has always sought to justify the dominant political order often beginning with the a priori and unquestioned assumption (that it takes as "non-ideological") that liberal capitalism is normal and good. The authorities of such political philosophy function as the ideologues of this normalization and determine (along with mainstream ethical philosophers), within universities and whenever they are called on as rational experts, the bounds of acceptable analysis. 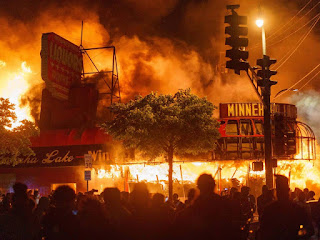 For example, Patrick Deneen, a professor of political philosophy at the University of Notre Dame, tweeted that a mural of George Floyd and Black Lives Matter signified "left totalitarianism". Hence, in the mind of this academic expert on politics, grass roots resistance to racist violence was more frightening than the literal manifestation of the police state. Although Deneen deleted that tweet (perhaps out of fear of "left totalitarian" reprisal), the fact that his twitter feed is still filled with claims about how there is no systemic racism in the US, that it was an irrational crime against free speech to challenge the New York Times for printing an article celebrating racist police violence (and that the NYT is being taken over by left "totalitarians"), should demonstrate that he is so high on ruling class ideology that he can't even teach students to critically think their way through any political problematic. Rather, it demonstrates that he was trained to simply accept the state of affairs as natural and to develop a rationale, largely inherited from bourgeois and US cold war ideology, that would allow him to teach pure ideology to his students while dismissing any challenge to this ideology as "ideological".

The fact that the experts of "political philosophy" have failed to deliver any kind of institutional analysis of the current situation should tell us that these experts have nothing meaningful to tell us. When they largely speak out to defend the right of fascist opinion, but have never in their life defended the speech of communist opinion, then the should stand revealed as ideologues of the state of the affairs. What philosophy departments have condemned the state of affairs in light of the riots? Very few. Mostly their tenured members are still defending the fascist free expression, as if there can be an open dialogue about racism and anti-people measures. This is the state of the discipline.

Reactionaries who teach in other disciplines like to proclaim themselves experts in politics just because they've read some Jordan Peterson and think that being an expert in, say, Computer Science qualifies them to have meaningful insights about political events. On the one hand, we can respond to this reactionary stupidity by pointing out that these peoples' academic training does not qualify them to talk meaningfully about politics and history, and that their understanding of our expertise (as political philosophers) is identical to a hypothetical situation where we decided to teach Computer Science and just make up random shit about a field we know nothing about. But on the other hand, political philosophy is already filled with ideologues who either agree with, or whose thoughts are comfortable with, this nonsense. Humanities departments, let alone philosophy departments, are not "indoctrination camps" for the left because the radical left is largely a minority in these spaces. If they exist they exist so as to justify the department's enlightenment vocation to promote a broad notion of "critical thought"––they are critical academics who dip in and out of what Harney and Moten called the "undercommons" of the university.

Largely, mainstream political philosophy is quite content to absent themselves from the language of the riots––to promote a liberal notion of dialogue or, like the Patrick Deneens of these departments, to complain that resistance is "totalitarianism" and thus forget the visible and violent manifestation of the police state. The fact that political philosophers draw on this Orwellian/Arendtian language of totalitarianism demonstrates that they are quite content to promulgate and defend the state of affairs. In the serialized On Necrocapitalism project, M.I. Asma writes

the riots that spread across the US following the murder of George Floyd led to many of the same people who proclaimed the pandemic "dystopic" sharing pictures of the property damage and looting, declaring yet again that they had woken up to dystopia… It was not the fact that the pigs could murder another black person as part of business as usual, that the oppressed and exploited masses are living under a constant state of emergency, that was conceived as dystopian. Rather, it was the response to this actual nightmare reality that was perceived as alien, as "other" and outside of the norms expected by those who benefit from the normalized violence of the bourgeois order. And the state of emergency measures responding to the riots… are treated as the forces of order responding to the chaos of dystopia rather than a spectacular violent attempt to reassert the dystopia of the everyday.


Going back to Harney and Moten's The Undercommons there is this concept they use that parallels the above quote: "war on the commitment to war." That is, the state justifies its violence by claiming that it is a response to the "commitment to war" of those forces opposing the state––that its violence is simply a response, a balancing act, to neutralize violent anti-state commitments. The police manifesting in the riots is simply a rational response to recalcitrant populations committed to spreading disorder. But this is ideological. As Harney and Moten go on to discuss, there is an originary violence of "conquest" that is unspoken and rendered normative: the violence of capitalism, the violence of settler-colonialism, the violence of imperialism. Hence, the "war on the commitment to war" is largely the war of original conquest reasserting itself but claiming that it is a response to violence when in fact it is the foundational violence reasserting its right of establishment.

Mainstream bourgeois philosophy, then, plugs itself into this "war on commitment to war" since it is largely about justifying state responses to the riot, defending them as rational responses, obscuring the original conquest (Moten and Harney call this "conquest denial"), and reifying liberal (and sometimes reactionary) politics. In the years leading up to the riots we were already warned about mainstream political philosophy: its ideologues defended Nazis, complained about physically assaulting them, and ordered us to stick to that marketplace of ideas that was opposed to the supposed "commitment to war" of recalcitrant and rebellious forces. According to the liberal mindset, violence and war is only that which threatens the normative order and never that which keeps the normative order in place. Riots and rebellions are thus monstrous; they cannot even be imagined as rational responses to the violence of business as usual because business as usual is, well, usual––normative, a-okay, the way things are. And mainstream bourgeois philosophers are largely okay with the way things are.

But we know what the university really is: a complex and confused bourgeois apparatus of normalization and capture. That is, it normalizes bourgeois power and it attempts to capture those critical of this power into critics divorced from organizational counter-power. Well that's how it is, that is bourgeois governance in academia, and it is frightening how many academic professionals collaborate with this, turn themselves into state ideologues, and imagine they are somehow outside of class struggle. So against the ideologues of mainstream bourgeois philosophy, radical philosophers must resist this normalization of "the conquest" and reveal the a priori and lazy commitments to capitalist normativity that are allowed to pass as critical. We must expose these ideologues of capitalist normalization, along with with their so-called rationalilty, and their purchase within the university that is really not, as raving reactionaries claim, a leftwing indoctrination camp. If only it was such a training ground; we need to create such training grounds everywhere and in all places.