November 03, 2019
I grew up familiar with a lot of Christian circles, because of my family's Christianity, and some of them were quite weird. Despite the fact that my family, regardless of its own and sometimes odd commitments, was critical of mainstream Canadian evangelicalism, I still encountered those kids from Christian families that lived in weird little worlds of confirmation bias.  For example, I remember sleeping over at the house of a friend who was "pentacostal" on Halloween and being taken to a church drama ("Heaven's Gate and Hell Fire" – yes I remember the title) that scared the bejeezus out of me because it was about how all unbelievers would die screaming in hell. And this from a family that thought horror films were Satanic and yet subjected me to the worst kind of horror imaginable. To their credit my parents, whose commitment to Christianity was connected to conceptions of "the social gospel", were incensed that I had been subjected to such an experience and never let me spend the night with that family again.

In any case, despite and because of these traumatic experiences, I became very familiar with the Evangelical Christian worldview which sometimes intersected and sometimes diverged from my own family's worldview. One significant aspect of this worldview was that anyone who once called themselves "Christian" but chose to walk away from this definition, becoming atheist, agnostic, or an adherent to another religion, was someone who had never been a "real Christian" to begin with. Because, the logic went, if you really understood the "truth" of Christianity then you could never betray it; only those who lacked a "personal relationship with Jesus" would abandon Christianity, proving that they had never been true Christians.

Even as a kid this claim about what warranted true and false Christians struck me as foolish. The idea that someone who changed there mind was never truly committed in the first place was a weird notion to accept. It seemed to me that people could believe one thing at one period of their life but be convinced of another thing at another period of their life, but this did not mean that they had really not believed what they once claimed they did; it simply meant that they changed. Maybe I had some glimmer of the problem of identity early on, or maybe I just didn't like the dogmatism that appealed to authentic commitment. Whatever the case, I hated this dogma of true commitment.

And I still hate it, decades after my experience with the Christian version of the true believer, and especially despise how it sometimes finds its way into communist circles.

Anyone who has been an organizer for a while will be familiar with the fact that some comrades will leave their organizational circles, will change-up ideological commitments, and might even become social democrats, liberals, and at worst reactionaries. When this happens there is often the temptation to apply something similar to the dogma of "the true believer" to make sense of what happened. That is, rather than try to understand the shift in perspective according to material circumstances, and the complexity of ideology driven by these material circumstances, we instead seek the explanation on the level of individual psychology: the erstwhile did not "truly" believe what they once professed because if they had actually been devoted to the truth they would not lose their way; only people were never really cadre, who were secretly never truly committed, would walk away from what we understand to be the truth.

Such an explanation is neither satisfactory nor materialist. For one thing, it doesn't account for the fact that those who shift ideological positions have to do so by denouncing what they previously believed, going so far as to denigrate aspects of their previous work, thus demonstrating that their previous work and beliefs were fully in line with "true commitment". It thus leads to the suspicion that everyone is a possible traitor because, if even those who lost their way were themselves unaware that they were always inauthentic, how can we be sure of anyone? The only solution is to embrace a rugged determination to be authentic, a promise to never give up, and worry that we are surrounded by those who are too weak to persist.

(To be fair, psychologically this happens no matter what. Abdication of a revolutionary project makes those devoted to such a project feel a certain level of fragility, especially if such a project is already fragile. Abdication is a wound no matter how unjustified it might be. Those who inflict it, who were once comrades, leave organizational trauma that undermines the work they were once part of––they become unfaithful agents of collective trauma.)

The fact is that there are multiple concrete reasons, driven by reality of class struggle, that generate individual shifts in ideology. Beneath this is another and very materialist fact that we are not, as liberal ideology would have it, discrete individuals driven primarily by personal psychology unique to each of us. Although it is indeed the case that individuals are responsible for the choices they make, it is also the case that individuals are ensembles of social relations and that thought is determined by matter, not the other way around. Any given individual is not necessarily the same individual they were in the past: we do not possess stable identities but, rather, our identities are in a large part determined by social relations.

If anyone doubts the fragility of individual identity––that the liberal doctrine of unique individuals is a myth––all you have to do is look at your own personal development to realize that you are not the same person you used to be. The way you changed, though, was not because some authentic you was being actualized but simply because your social being determines your social consciousness. For example, when I look at my own personal development I know that I used to be an anarchist, became an autonomist Marxist, and then gravitated towards Maoism. My rejection of these past ideologically committed selves was not that I was always secretly a Maoist who just didn't realize it, but because I changed based on social experience. It was not that I was not truly an anarchist when I was an anarchist (halfway through my undergraduate), or that I was not truly an autonomist Marxist when I made that shift (at the end of my undergraduate up to the beginning of my doctorate), because my past selves really were committed to––and truly believed––those ideological positions. I am simply no longer the same individual, though I can remember being such. Nor do I believe that there was some stable, metaphysical self beneath these ideological shifts that was never truly committed to what I now see as erroneous political positions. I know very well that I would dislike the version of myself from 2000 just as that embarrassing version of myself would probably call my current self an "authoritarian". The point, here, is that no individual lurks outside of class struggle. Hence, most importantly, the circumstances generated by and individual's experience of class struggle will provoke shifts in personal identity.

For example, improved social circumstances can cause some comrades to abandon the struggle because, since social being determines social consciousness, it is easier to adapt to bourgeois society the more that society makes your life comfortable. For example, in the social context that I'm familiar with, Marxist academics who were once quite radical can be (and have been) deradicalized upon receiving tenure or even better contract work. Those who at one point did their best to support class struggle sometimes discover, when their circumstances change, that it is better for them if they do so at a very comfortable distance––worse, they might attempt to undermine situations of open class struggle. But we see this in the working class movement as a whole, with the dawn of the labour aristocracy aiding the growth of opportunism in the communist movement. Even the anti-revisionist movement of the 1970s was undermined by the labour aristocracy and economism when cadre ended up, through the strength of their organization and the skills they learned as organizers, in key union positions––many quit the movement and adapted. Individual consciousness can change based on social circumstances. It is not that these people were always secretly unfaithful; they simply became different people, that is different beings with different consciousnesses. Their old selves would have hated their future selves; their current selves always seek to forget or dismiss their former selves, attempting to repress past identities that would hold them to account. 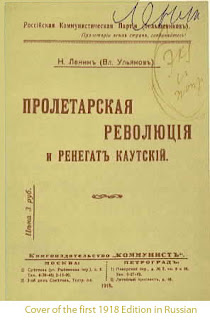 In the end, the strength of a movement must exceed its individual members. It must go beyond the dictums of "one step forward and two steps back" or "better fewer but better" so that the loss of once significant organizers is understood as part of the struggle. Individuals will drop away and their dropping away won't invalidate their contributions, it will simply invalidate who they have turned into at the moment they chose to stop being fellow partisans. There are not permanent individuals; there are simply subjective commitments, and some people will choose to reject commitment. So what: they have become different people, former comrades. It is saddening but predictable. Lenin's The Proletarian Revolution and the Renegade Kautsky is a paradigm example of this sadness since it is clear that much of the ire in that polemic is based on the horror that Lenin did not expect Kautsky to become a revisionist. But it is predictable, now after so many decades from this particular Lenin polemic, that comrades will follow this "renegade" process, in their own particular ways, and drop out of the movement.