The Alt-Right Was Not A Response To Some "Alt-Left"

July 24, 2017
A common adage about the "alt-right" repeated ad nauseum on social media by liberal journalists and alt-right trolls themselves is that its emergence has a lot to do with angry online leftists, particularly the "Social Justice Warriors" (SJWs), as well as call-out culture, identity politics, virtue signalling, etc. The assumption here is that most of these new white supremacists wouldn't have existed if they weren't dog-piled by self-righteous SJWs or anti-oppression university academics: these alienated young whites could have been won over if they had been treated differently, and it is in fact the committed anti-capitalist broad left that is at fault for the resurgence of white supremacy not the white supremacists themselves. In some ways this reads like a new version of the horse-shoe theory and, like the horse-shoe theory, it is thoroughly unscientific.

To be fair, I get the concern of the more well-meaning individuals who make this claim. They wonder whether the left and its political perspective could be better served if more educational and organized approaches were used, and in general it is good to think about how we generate counter-hegemony and the ways we gather in more combatants rather than alienate people who are still ignorant about a lot of things. But to claim that the resurgence of white supremacy (and misogyny, and transphobia, and pretty much every other oppressive behaviour) is the fault of a toxic left wing culture has no basis in fact; it is always asserted as a truism (again, just like the horse-shoe theory) and it is quickly becoming another banal platitude. Moreover, it in fact a quite dangerous assertion to make since, generated by a liberal understanding of racism, it overlooks what kind of organizing needs to be done. While organizers must win over the broad masses who could also be captured by fascists movements they must also begin with those sectors of the masses that experience the most exploitation and oppression––precisely the groups of people "calling out" the internet trolls who apparently decided to go hard right simply for being challenged online.

(Also it's not as if anyone repeating this bland adage about SJWs precipitating the hard right has done the social investigation to discover what precisely the class background is of the trolls who go alt-right. Some people have, though, particularly the authors behind CTRL-ALT-DELETE, the first published study on the alt-right. The alt-right and its adjacents are primarily "upper middle class" and are obsessed with keeping their elite class position. In other words, these are not people that any left movement worth its salt would see as the target population to organize; even before their supposed conversion to white supremacy these people were invested in maintaining capitalism.)

But this discourse of the left creating its monstrous double is not new; it goes quite a way back in US (and Canadian) culture. In the early 1990s, for example, John Singleton's Higher Learning included a sub-plot about an otherwise "nice" white kid who gets pushed into being a neo-Nazi because his alienation is reinforced by black people and university intellectuals who are mean to him. I saw that movie when it came out and, even though I was in grade ten, I still felt there was something a little off about it: why the hell would somebody become a raving Nazi willing to shoot people from a bell tower simply because he was challenged? I felt that I was missing something, that there had to be some other facet that the movie did not depict, that would result in what was supposed to be an ideological rupture. Hell, go back further: anti-communist propaganda was obsessed with arguing that "communist agents" were causing unrest by setting labour against management, as if there was nothing antagonistic in this relationship by itself because otherwise in happy USAmerica everyone just wants to get along. Anti-Civil Rights propaganda used a variant of this discourse, its most virulent ideologues claiming that Black Americans were otherwise happy with Jim Crow if it wasn't for some deep seeded communist agitation. 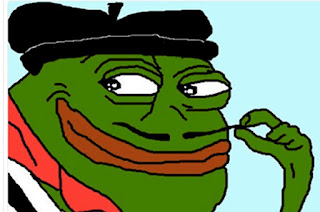 What those propagating this discourse, even the respected intellectuals doing so in columns and books, refuse to discuss is that what would become the alt-right was already in existence and developing long before SJW call-out culture. The Silicon Ideology is one text that pointed this out before "alt-right" became a buzz word and, despite its short-comings, provided a history that found its roots in the 1980s, merged with neo-reaction, and was already gathering adherents before "alt-right" or "SJW" were terms anybody knew. Critiques of identity politics and call-out culture were largely absent from this historiography because this was a movement that, in its crucial development stages, wouldn't have had any experience with call-out culture: these were not people who had, or wanted to have, an experience with the broad left. The aforementioned CTRL-ALT-DELETE also demonstrated that the alt-right's emergence and development had nothing to do with lefty self-righteousness. And so far The Silicon Ideology and CTRL-ALT-DELETE are the only texts about the alt-right that approach a proper standard of historical rigour.

So something else lurks behind the emergence of the alt-right and not the convenient bug-bear of leftwing self-righteousness. Such a discourse is too easy, it is largely unfalsifiable, and relies only on surface-level observations and the odd statement from alt-right trolls who loudly proclaim that feminists and anti-racists made them fascist.

In his brilliant essay Racism and Culture (which is less known than The Wretched of the Earth or Black Skin White Masks but should be read alongside the former) Frantz Fanon pointed out that racism is not an aberration in colonial contexts. If a society persists as a society because of white supremacy then members of this society who adopt racist attitudes are not anachronistic but, in fact, living in unity with the ideological patterns of the social formation. It is only liberals invested in defending idealist versions of these racist societies (i.e. like the ACLU liberal who thinks that America has a greatness since its inception that was simply derailed because of racism) who think that a member of the KKK is an aberration, that racism is a problem of psychology that can be treated with "[c]ampaigns of deintoxication." (Fanon, Toward The African Revolution, 40.) Rather, racism "haunts and vitiates American culture." (Ibid., 36.)

The reason why people gravitate towards the alt-right is not because of the behaviour of leftists but because, primarily, racism is an organic option for a white male who has been taught to see any reform (no matter how paltry) at creating a level playing field as a personal attack. These are people who do not like being told that they cannot be in control of everything, whose white identity is fragile when subjected to critique, and who thus seek to reinvigorate a sense of power by submerging themselves in a current that never went away in a colonial and imperialist social formation: white supremacy. Moreover, fascism is always an option in capitalist societies; it is an immanent possibility because of what capitalism is: in Austerity Apparatus I called it the capitalist "state of emergency" that is always lurking within in every capitalist society. I mean, just think about it rationally: how does a white dude living in his well-to-do parents' basement suddenly become a raving racist? To assume that all of these people are experiencing psychological ruptures because of dealing with self-righteous leftists simply begs the question: if they did make such a choice because of a bunch of SJWs dog-piling them then we really do need to ask why it was so easy to choose neo-Nazism as an option. Because it already was the option, the primary and most intoxicating option, presented to everyone who is taught to locate their identity in white settlerism. And all we need to do is read what these people have written before declaring their new Nazi identities to realize it wasn't much of a rupture to begin with, nor are these the kinds of people whose thought patterns would wildly change after being attacked by leftists: the vast majority of them were anti-leftist to begin with and, more importantly, obsessed with the idea that their individual and unsubstantiated views about reality are correct. Even more importantly: these are the people who were leading abuse charges before SJWs attacked them; they were always the abusers, the trolls, the self-proclaimed online elite.

If the left can be blamed for anything it is simply that it has made the fault lines evident. This is what left movements do with various degrees of organization and precision: draw clear lines of demarcation. While we can definitely argue (and I consistently make this argument) that certain approaches to demarcation are not as good as others because they are not designed to create a structured mass movement, devolve into petty-bourgeois angst, and lead to nothing sustainable, this is a much different argument than the one made about the left creating the alt-right. It is not wrong to say that the general "SJW" and academic "call-out culture" has largely failed, because of its movementist practice, to draw the most precise demarcating lines and build organized anti-systemic movements, but it is wrong to assume that such an unfocused movementist approach is responsible for fascism when this responsibility lies with the social formation itself. Indeed, a more disciplined and organized mass movement will call forth clear fascist enemies because, while not creating disharmony amongst the masses (as the anti-communists always claim), it does create the consciousness of this disharmony… It organizes based on a committed hatred of exploitation and oppression that is otherwise muted by "common sense" ideology. Such an ethos, when fully adopted, does not create the alt-right: it reveals what was already there and, in doing so, demands social transformation.