June 20, 2016
It's been a while since I posted for a variety of reasons, but mainly the energy consumed by work and childcare. In the spare writing time I've possessed I have preferred to work on other projects: essays for journal submission, manuscripts for future publication considering that I seem to be having luck with that, and reading notes for books I've been trying to eliminate from my always growing book queue.

But two things that I've been writing, amongst other things, in the interim were not intended for journal submission and do not work as parts of larger book projects although they did come out of these projects. Hence, I will be posting them, in some shape or form, on this blog. The first, which I will be posting later when it is properly edited, is a fun engagement with the concept of the party that, inspired by reading Jodi Dean's recent book and tangental concerns of my upcoming Continuity and Rupture, will work as a kind of promotional for this book's release. The second, which I am posting here, was a combinatin of a tangent in my manuscript on the philosophy of Marxism (that keeps going through drafts and is now entering its fifth year of being revised and re-revised) and the original version of my review of Laruelle's Introduction to Non-Marxism that was cut to fit the word count and a proper academic tone.

[Note: if you don't want to read an explanation of the article in question you can skip to the bottom where it's linked.]

As long time readers of this blog will be aware in the past two years I've been reading Laruelle––something I began because I felt it might relate to the aforementioned book on philosophy––and, though I keep reading him to give him a fair deal, have not been entirely impressed with his project or his understanding of reality. Over a year ago, when I expressed my annoyance with his project in a series of short book summaries, I was forced to deal with anon commenters who were really upset that I disliked Laruelle (it wasn't a review, though they treated it as such) but could not explain what was important about Laruelle. By the time I wrote the review for Marx & Philosophy Review of Books I had read Philosophy and Non-Philosophy, Principles of Non-Philosophy, parts of Dictionary of Non-Philosophy, Anti-Badiou, and Introduction to Non-Marxism (yep, despite thinking he was a charlatan after reading that first book I kept up the reading) but, aside from the excellent chapter by Brassier in Nihil Unbound (a book that, while I disagree with large parts of it, I cannot recommend enough), was shocked at how all the pro-Laruellian essays I could find online by his biggest supporters could not produce a half-ways coherent review. That is, so much work on Laruelle is as obscurantist as his own project and fails to explain the meaning of his project except in his own terms, usually dismissive of any would-be critics by using the rhetorical "not for beginners" pseudo-argument. Which is mainly I wrote the review of Introduction to Non-Marxism: to write something that was a clearer exposition of Laruelle and, by making the explication clear, demonstrating my problems with the project. 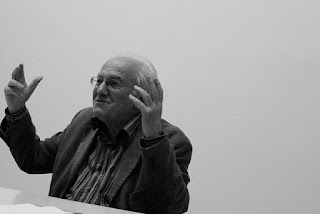 But I had much more review material, as well as an ongoing polemical annoyance, than what I submitted to Marx & Philosophy Review of Books. Moreover, a parallel engagement with Laruelle in that manuscript on marxist philosophy caused the expanded review to expand further. Finally, upon reading a recent review of Laruelle's Principles of Non-Philosophy, published on the same site as my aforelinked review, that did precisely what bothered me about previous engagements with Laruelle (did not demystify his elaborate formal system, failed to explain what the book in non-Laruellian language, argued that it was not for beginners, and did not do what a review should do) I decided to finish the already large essay and post it here.

Now I realize that many of my readers will not be interested in Laruelle's project, and engagements with this kind of philosophy is something they find boring, so it might be least popular essay. But since I am an academic who works in the discipline of philosophy, and think that I have a responsibility to draw lines of demarcation in that arena (while agreeing that it is not the primary arena of struggle), this essay (which is more polemical than what I would write for an academic journal or how I would teach in the philosophy department to be clear) is a closer approximation of the kind of thing I regularly do and is something of a taste of that manuscript on marxist philosophy I will get around to submitting some day. [As an aside, it's interesting how the terms I developed in the course of that project have seeped into all of my writing so that even my upcoming book on MLM and philosophy uses terminology from that manuscript.] Also, since some people seem to think that Laruelle's work is useful for an anti-capitalist politics (though they cannot say why), and have defended his project on my blog, at least this will let them know why I disagree with his project.

As always, if you enjoy this essay and the others I've offered for free, and you think that this kind of literature is worth the price of a coffee or two, I accept donations!