Good and Bad Reviews of *The Communist Necessity*: some responses

November 06, 2014
There are now a number of reviews of my book, The Communist Necessity, that have thankfully proven it has not been greeted with silence.  Although two of these reviews, to date, have been completely negative, four of them have not, even if they have been critical about certain aspects of my treatise.  But as the adage goes, no press is bad press––and so I am thankful for even the negative reviews, as baseless as I feel these reviews might be.  In any case, for those who have not yet read my book––or for those who have read it and might still be convinced to write a review––I am going to use this post to provide something of a map of the reviews to date, as well as providing two PDFs of my responses to those reviews that I felt were extremely problematic. 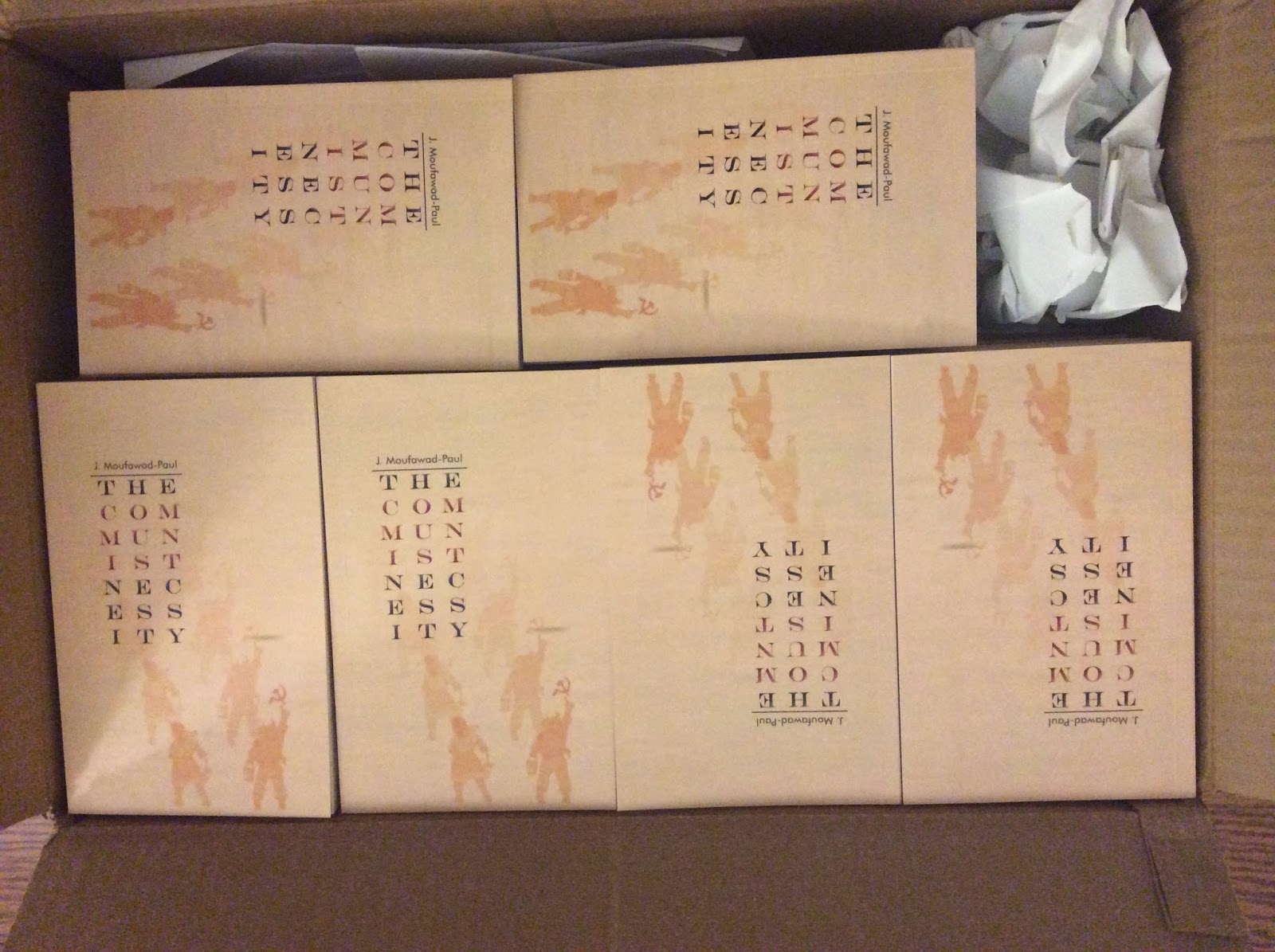 Four of the six reviews that exist so far have been generally positive, though still critical.  Of course, I am happy that they are critical; the different criticisms they have raised have come from a position of good faith where they took my text seriously so as to point out what they felt, for different reasons, was lacking in and/or problematic with the book.  I have learned a lot from all four of these reviews, and think that their critiques are best solved in other projects, and am very thankful that the reviewers have bothered to engage with my book.  No book is perfect; honest engagement allows thought to develop.

First of all, there is Gabriel Kuhn's review.  While generally appreciative of my critique of movementism, Kuhn draws the reader's attention to my failure to fully flesh out the concept of necessity, my inability to concretely explain why the ongoing people's wars should be treated as important, and a host of other things that he felt I failed to address (no point in providing a thorough list when you can read the link!).  In any case, he asks some good questions that I would hope to answer in further projects.

Next, there is Tiger Manifesto's review.  This reviewer, while also generally positive, focuses on my discussion of necessity in a manner that is somewhat difficult from Kuhn, but only because it might be more precise: as an historian, the reviewer engages with the way in which there are possible "ambiguities" with my use of the term, between what s/he deems "the mechanical and the more historically useful definitions of the word." Interesting stuff, this.

Thirdly, there is the Workers Rule review.  After pointing out what is significant/important about my book, this reviewer complexifies the problematic of movementism by arguing that my focus on the first world dimension of this practice/ethos/sensibility ignores the fact that it is also normative in the peripheries.  Based on this analysis, the reviewer is able to call attention to a variety of potential blind spots to my book––some of which I find fruitful, some of which I do not, but the discussion is still worthwhile (excepting, in my opinion, the pro-electoralism that lacks any argumentative justification).

Finally, there is the MIM(Prisons) review.  Also generally appreciative, this review points out my failure to provide a foundational class analysis.  Even if it might be the case that I might not fully agree with this reviewer's conceptualization of class, I probably should have provided some form of class analysis so as to explain this difference––if only for the sake of clarity of argument.  Also, and as an aside, the MIM(Prisons) reviewers were nice enough to remove an inaccuracy in their review, after I sent them a hasty email, demonstrating that they really do care about correctly representing the subject matter that they put up on their website, regardless of their disagreements with said subject matter, which is very laudable.  Then again, I guess I should have expected folks who do direct action work with political prisoners to possess this kind of honesty.

Now we come to the reviews I deem shitty.  Not because they are critical––because, lord knows, the ones I listed above are also critical––but because they are pseudo-critical.  That is, their criticism is derived from a general refusal to engage with my book in an honest manner: critiques born from misrepresentation.  Which is why I have chosen to link PDF responses to these two pseudo-critiques so as to explain how and why they fail to satisfy the demands of a proper critique, falling into the rhetorical rather than critical camp.  Initially I considered ignoring these bad reviews entirely because: a) I didn't respond to the other critiques, and I was originally of the opinion that it would be best not to respond to criticisms I disliked and instead just address them in other work; b) I respect both of these authors for different reasons. But, since both of them were written in a style that demanded a response (one was forwarded to me by email first, another was written in the form of questions for the author), I figured that it might be the case that they wanted a response––though I don't know if it will matter.  Nor am I interested in promoting a back-and-forth between myself and the reviewer; I have more pressing things to do, and it is probably the case that I shouldn't have written these responses to begin with––but here they are!

First off, there is Don Hamerquist's review.  Focusing mainly on complaints about my understanding of history and theory, without offering an argument as to why his understanding is better (or any real arguments as to why my position is incorrect), this review was something of a disappointment for someone, such as myself, who has enjoyed some of his articles––as well as, to be honest, some email exchanges.  As I point out in my response, his review's criticism is rather hampered by his own subjective experience of reality.

Secondly, there is André Moncourt's review that takes the form of over sixty rhetorical questions.  Considering that Moncourt was the co-editor of the RAF documentary history books, I was rather surprised by the tone and content of some of his questions.  Accepting a cold warrior understanding of history as correct to the point that he thinks he can just assume this history in some of his rhetorical questions (drawing upon dubious terms such as "totalitarianism" or arguing that Mao was guilty of genocide and crimes against humanity), it was very hard to reconcile this Moncourt with the Moncourt partially responsible for the RAF histories.  Why he would question the anti-communist narrative applied to the RAF but not the same anti-communist and pro-imperialist discourse that is applied, in a much larger sense, to the Soviet Union and Revolutionary China, is something I find quite contradictory, and not in a dialectical sense.  Add to this his confusion over the meaning of the term transhistorical, his weird complaints about the PCR-RCP that crop up at multiple points that have nothing to do with the PCR-RCP, and his worry that I'm some sort of dad who is just stating his position as a because-I-said-so prescription rather than an argument (the irony, here, is that rhetorical arguments are in fact "because-I-said-so" stratagems since they are not arguments, but concealed prescriptions in the form of questions), I am even more confused.  I don't know if he's going to bother to read my answers to his questions, or if anyone will for that matter, but I wrote them anyhow.

Although there is some truth in the adage "no press is bad press" (and thus I am happy to receive even bad reviews, which can never be avoided if people are actually reading your book), there is also the problem I pointed out in my critique of D'arcy's review of The Worker Elite: sometimes bad reviews, if the reviewer is influential enough, might prevent people from reading a book, shutting down engagement and suppressing a position that threatens the reviewer's own political line.  Thus, unlike fiction, political non-fiction is such that responding to erroneous reviews serves the same purpose as the book itself: drawing lines of demarcation, engaging in theoretical debate, etc.  I have no illusions that my responses to Hamerquist and Moncourt will convince the authors of the problematic aspects of their reviews, though that would be nice, and I doubt that any response from them would tell me more than what they have already written, unless they were to engage with the arguments I made in themselves… And even then their responses would be as predictable as my counter-responses––such arguments have gone round and round for decades.  At the very least these responses allowed me to think through, by writing, the reasons why I found their reviews off-the-mark; at best, they will convince interested readers to examine The Communist Necessity for itself.  Not because it is a great book that thoroughly engages with its subject matter (it is definitely not this) but only because it might help clarify some things in their organizational life––or at the very least to get them to write another critique!