December 20, 2013
My first experience with actual activism, just when I was deciding I was an anarchist and trying to figure out what that meant, was in an organization that equated political radicalism with anti-consumerism.  This was precisely what Murray Bookchin, who I would later come to love in the twilight years of my anarchism, would have deemed lifestyle anarchism but at the time I was just a kid who wanted to make a difference and this kind of politics appeared compelling.  Specifically, I was part of "Students Against Sweat Shops" (or SASS because it was so sassy!) that, without any analysis of imperialism, treated the problem of the export of capital as something that could be defeated by fair trade policies and a refusal to buy sweat shop made commodities.  Although I eventually grew up and quit being even a mature anarchist, apparently so many others remain trapped at this stage of infantile anti-consumerism.  This kind of politics is possibly endearing when it is practiced by an eighteen year-old, but it becomes rather loathsome, or at the very least annoying, when it is expressed by people who are not only old enough to know better but who endorse anti-consumerism with a self-righteous and elitist attitude.

I am talking about the recent anti-consumerist furor over Walmart's commodification of Banksy's anti-capitalist art that has led more than one internet leftist to get all up in arms about capitalist appropriation, as if this is a new practice for the average capitalist.  So aside from the fact that is not really "ironic" when capitalists do what capitalist logic demands––that is, commodify everything that can be commodified––the fact that more than one activist, driven by anti-consumerist logic, believes that simply buying the Walmart commodification of this art is tantamount to counter-revolution is somewhat hilarious. 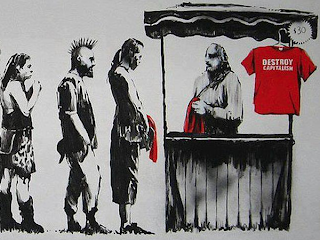 For example, Death And Taxes (which appears to think that there are multiple levels of irony to what capitalism just does by the virtue of being capitalism) seems entirely annoyed by the fact that someone would dare to buy a Walmart version of the Banksy "destroy Capitalism" print.  The author of this piece also wonders, with typical anti-consumerist logic, what would "make someone shop at Walmart, the very symbol of capitalism gone wrong."  Aside from the fact that Walmart is actually not "capitalism gone wrong" but "capitalism gone very well according to its own logic", the answer to this article's hypothetical question is actually quite simple: the people who shop at Walmart are by-and-large those people who can't afford to shop at the supposedly "ethical" stores that charge prices beyond what most people can afford.  Indeed, that offensive "People of Walmart" site (which I refuse to link on principle) is evidence of this fact since it is primarily a site devoted to mocking the poor.

Hence, anti-consumerist politics is a lifestyle politics that assumes the problem with capitalism lurks at the point of consumption rather than the point of production; it assumes that the solution to capitalism is based on our buying choices, on de-commodifying by refusing to buy from big corporations, and living as pure anti-capitalists in an individual sense.  The fact that the vast majority of people, especially those with the power to change society, cannot opt out in this kind of way, or the fact that buying at "ethical" sites of production does not at all escape commodification, eludes this simplistic and self-righteous politics.  Nor do most of the people who push this anti-consumerism see any contradiction in wearing clothes, walking down sidewalks, or living at the centres of capitalism which is entirely dependent on the brutal system they claim they are fighting when they make fun of people buying Banksy prints at Walmart.

Dan Arel, posting on Secularite, perfectly expresses this anti-consumerite idealism with his own self-righteous screed against the Banksy appropriation that is worth examining in some detail because it reveals all of the deficiencies of anti-consumerist politics.  Arel begins by also assuming he has uncovered an irony in Walmart's commodification of anti-capitalist art: "the fact that a company like Wal-Mart misses such irony in selling a product that is meant to insight [sic] a revolution that would destroy the very fundamentals of their business model shows just how far a company will go for a profit."  Well, yes, the tendency of a capitalist corporation is to expropriate as much surplus-value as possible; they go farther than simply selling Banksy prints and it might be pretty fucking offensive to assume that the appropriation of a piece of anti-capitalist art is somehow "going further" than the imperialist export of capital.  Nor is it correct to assume that Walmart "misses such irony"––as if capitalists making a buck off of anti-capitalist art aren't themselves laughing at this irony as they count their surplus-value.  And since the irony is apparently the fact that the product is "meant to insight [sic] a revolution," then it is not even ironic in the least since art does not incite or produce revolution anymore than philosophy or literature does.  So I highly doubt that the Walmart executive who made the decision to sell some "destroy capitalism" print really felt that their "business model" was being threatened by profiting off of something they otherwise disagreed with ideologically.  Hell, the Penguin corporation has been doing this with Marx for decades!

Hence, the tirades of Arel and others over Walmart's appropriation of Banksy's art is paradigmatic of an anti-consumerist ethos that cannot grasp the material basis of capitalism.  Here the obsession over the supposed "irony" of the act of appropriation conceals a greater irony: "they fail to understand the very things they stand against," Arel writes in regards to those who would dare to buy a Banksy print from Walmart, "but continue to be sold on this manufactured revolution by those looking to make sure it never takes place."  The focus on the level of consumption is precisely that which fails to understand capitalism and, in targeting consumers for their lack of revolutionary purity, cannot grasp the fact that there can be no such purity in the realm of consumption.  Arel also lives in a social context that is dependent on super-exploitation; Arel walks the same streets that are paved with murderous social relations; if Arel and his ilk are able to buy "fair trade" clothing and food, and thus content themselves with some ethical standard of living, they are able to do so because they possess a level of ethical privilege that allows them to afford what is often unobtainable by those who have no choice but to shop at places such as Walmart.

In truth, the commodification of the symbolic order of revolution is only important insofar as it tells us that capitalism is capable of commodifying everything.  Those who purchase these commodities because they are interested in revolution are not suddenly brain-washed and "wannabe revolutionaries" simply because they found a Che t-shirt or a Banksy print at some corporate site; revolutionary movements have little to do with this problematic.  Again: my volumes of Capital are Penguin editions––would I be more revolutionary if I purchased Peking's Foreign Language Press editions instead?  Here is another moment of irony: Arel's article about the Walmart appropriation begins by citing Marx's comment about hanging the capitalist who sold us the rope––he doesn't appear to get the point.