November 17, 2013
I'm taking a break from my "stalinism" series (which is becoming longer than I intended) in order to promote the First Conference for a Proletarian Feminist Movement, planned and organized by the PCR-RCP initiated Proletarian Feminist Front in Montreal.  This preliminary and semi-open conference will take place on November 30th to December 1st in Montreal.  Although it is intentionally beginning small (which is why the call-out, linked below, was not released until now), the idea is to build a national feminist front carefully, following the manner in which the Revolutionary Student Movement has been building itself with similar conferences.

As many of my readers will be aware, the Maoist movement has been promoting "proletarian feminism" for some time, most significantly in the works of Anuradha Gandhy and Hisila Yami. The PCR-RCP has long been involved in investigating this kind of feminism and how it is precisely demarcated from bourgeois feminism.  For some background, here are two of my previous posts (with their own links to significant documents) on the subject: i) Capitalism is Still Women's Enemy; ii) In Defense of Proletarian Feminism.

To Fight We Need Proletarian Feminism! 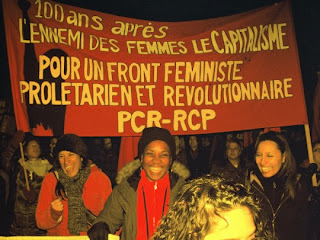 If any of my Canadian readers are interested in attending the preliminary conference, they will need to email the conference organizers, the email of which is included in the above document.  Please note: cis men will not be allowed to attend.