Addendum to "The Possibility of Abandoning the Left"

August 24, 2013
Coincidentally, the day after I finished my recent post on "selling out" was the day that I encountered the trailer for this delightful looking documentary about Brandon Darby.  I had forgotten about Darby, one of the more farcical repetitions of abandonment and collaboration, since I thought his story had run its course five years ago and that he would be relegated to obscurity and a sad life of isolation.  Of course not: he serves as a perfect example of the "tragic" figure of abandonment who, having "grown up", is celebrated by the ruling class for having embraced a more pragmatic view of reality.

Although Informant, the documentary about Darby, has still not emerged from the festival circuit, if the way in which it is being marketed is an accurate representation of its content, then it will be a prime example of the "common sense" ideology that celebrates those who turn their back upon their naive left-wing politics.  I mean, just look at its tag-line: 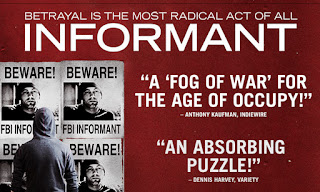 "Betrayal is the most radical act of all."  Amazingly insightful!  Thank-you normative bourgeois culture for recycling one of the pseudo-profundities you've been peddling for years.  The the-greatest-rebel-is-the-individual-who-rebels-against-the-rebels reasoning behind this movie's slogan is the sort of thinking that passes for critical amongst redditors, neck-beards, Randroids, xtian fundies, and all of the self-proclaimed "rebels" who are really little more than liberals and/or reactionaries who want to believe that their capitulation to normative ideology is somehow secretly dissident.  (The corollary, of course, is that these people are also deluded into thinking that they are somehow more oppressed than oppressed peoples.)

Really, this "betrayal is the most radical act of all" clap-trap is what you would expect to find in a Camus novel or someone who is really into Camus-style existentialism.  Camus who wrote radical sounding proclamations about rebellion and yet sided with reaction by refusing to support the anticolonial rebellions against France's occupation of Algeria and instead, perhaps "rebelling" against the politics of Sartre and de Beauvoir, align himself with the interests of the French State.  Rebel infantilism, really, which is no more than bourgeois individualism that wants to imagine it is more radical than it actually is.

This sort of "it's so radical to betray the radicals", and the implicit value judgment behind these kinds of statements, is the type of thinking that would allow someone to declare that betraying the anti-fascist resistance in France and collaborating with Nazis is truly "rebellious".  Or that openly supporting the KKK or some neo-Nazi group now, when this kind of explicit racism is considered in bad taste by the still racist ruling classes, is the height of radicality.  Or, to really connect with the infantile rebel culturalism of today, that a reactionary who blew up the British parliament building in order to reinstate the pre-Enlightenment Catholic order is someone who we should celebrate by wearing masks of his likeness.  What this kind of radicalism means, despite its rebel-trappings, is capitulation to the ruling class: that is, in the current state of affairs, it is not really that radical since it results in the maintenance of the bourgeois order and what is permissible in this order; it is little more than being an individual who refuses to conform with politics that actually do challenge the status quo and, in this refusal, actively supporting hegemony––that is, actively not being a rebel in the critical sense of the word.

(A tangental point, here: I also do not think that a politics should be built simply on an ideology of rebellion.  Not only is this a juvenile approach to reality, it lacks any critical awareness of the period following any successful revolutionary overthrow where the remnants of the ruling class will attempt to return and operationalize counter-revolution, rebellion against socialism.  There is, of course, the need to rebel under socialism––hence the Maoist theory of Cultural Revolution––but this should mean the reduction of politics to Mao's slogan "it is right to rebel" without recalling that Mao also argued that this rebellion needs to possess a content that is not simply rebellion, "it is better to make revolution".  Anyhow, I might address this in a later post.)

Well there is a tradition of this kind of rebel ideology in USAmerican culture: the maverick individual who is a rebel simply because he rejects every collective ideology with his staunch individualism.  This ideology, as we know, is nothing more than a mythologized variant of the bourgeois human––the pure, isolated individual––and essentially no more rebellious than a wealthy libertarian who thinks that he is defying the system by fighting against social welfare.  Or the cop we are taught to see as a rebel because s/he defies hir bosses in order to proclaim a truer fidelity to an unquestioned legal-political order.  In its more asinine and banal form, it is the kind of thinking that allows someone to think that defying safety regulations (i.e. wearing a seatbelt while driving, a helmet while on a motorcycle) is the height of rebellion.  What rebels these mavericks are!

Which brings us back to Brandon Darby who abandoned his anti-capitalist politics, turned FBI informant, and has been celebrated by the ruling class for his "honesty" and "foresight" and "humanity" and "courage"… and now we can add his daring "radicalism".  Yes, what a rebel Darby is: working with the security forces of the most powerful country on the planet to turn his activist friends; showing up at Tea Party rallies beside billionaires; going on about hard it was for him to make this courageous decision, and how he made such terribly moral decisions, when he has personally profited from his collaboration and, unlike his dastardly friends who he had the courage to resist, is not in prison but is now good friends with all the people who will keep him out of prison forever.

Betrayal is the most radical act of all?  What garbage: people who betray the movement and collaborate with the state are "radical" only insofar as they have possibly made a radical break with their previous politics––otherwise they are just collaborators, and the truth is that, right now, collaboration with the state has more benefits than staying within anti-systemic leftwing movements.  It's not like Darby is having any problems now that he's sold out all of his former comrades: he has new friends, now, and they are powerful and wealthy friends.

(Another aside: so what if he receives the odd death threat?  In the past, collaborators were killed by resistant movements and we should understand this fact as necessary to any movement that has entered the stage of strategic defensive: the anti-fascist resistant movements in Europe never apologized for killing Nazi collaborators and leaving their corpses on the street as a warning to other would-be collaborators; the ANC in South Africa never apologized for burning its collaborators alive in car tires as a deterrent.  And considering that there is no such movement in the US, and the people probably sending him death threats are his old friends who are activists without a people's army, then he really has nothing to fear––and he knows it.)

All of this is to say that, in light of my previous post, the way this documentary is being marketed is yet more evidence of how an abandonment of left-wing politics is not only seen as inevitable but is celebrated by bourgeois culture.  And when the collaborator is held up as someone to be admired, valued, and followed, then we have to wonder how "rebellious" and "radical" and "courageous" such a person actually is.