Liberalism and Internet Leftism: the meltdown of "Maoish" Rebel News

March 22, 2013
Although much has already been made of Maoist Rebel News' [MRN] public youtube meltdown, and indeed a very good blow-by-blow analysis of everything leading up to this meltdown has been written, I still believe it is worth examining here.  Not to internet "ambulance chase" (in this case, I'm not even sure what that would accomplish) but because the MRN meltdown is significant insofar as it can teach us something about correct communist practice.

For those unaware of MRN and what I am speaking of, here is a quick summary of what happened: Jason Unruhe, the person responsible for MRN (a youtube channel that promotes a "maoish" analysis of public events) was challenged on his use of homophobic language; he refused to recognize the criticism and attacked his accuser, going so far as to imply she was a pseudo-feminist simply because she dared to mention gender; he released a youtube video defending his right to privacy and use anti-queer language, arguing that the use of this language did not make him homophobic and that anyone who attacked him was a liberal (something that was, it must be said, rather ironic since his rant was, in many ways, a perfect expression of liberal behaviour); he equivocated between right-wing critiques of maoism and critiques of his behaviour (thus poisoning the well so as to claim that anyone who critiqued him must be either a liberal or reactionary); he mocked the woman who critiqued him while appealing to his feminist credentials. 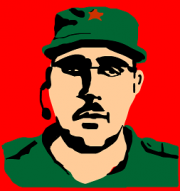 But the reason I take this public meltdown seriously is because MRN is an internet presence that presume to represent a maoist ideology (as is this blog), the author lives in the same country as myself and seems to identify publicly as a maoist, he mentions the PCR-RCP in his rant for some odd reason (at least he was clear that he was not affiliated with them in any way), and the way in which he defended himself––along with the responses to his behaviour––can teach us something about the practical issues of being communists.

The most obvious problems outside of Unruhe's desire to defend his liberal right to use chauvinist words without censure have already been pointed out by others including the aforelinked analysis: the rejection of criticism/self-criticism (a hallmark of maoist ideology); the promotion of a bourgeois notion of the private sphere; a defense of rugged individuality that led Unruhe to almost proudly declare his lack of affiliation with any revolutionary party.  So the initial chauvinism of MRN––his desire to have the right to use certain words just because he likes them––is contingent on a concrete [mis]understanding of communist praxis.  So we should learn something about praxis through the MRN meltdown; even if this public display of personal arrogance had been about something else, it would still be necessitated by this fundamental and material problem: a complete rejection of communist practice that can only lead to liberal behaviour.

Most importantly, the meltdown was about defending the right of an individual to remain immune from comradely criticism; it was a defense of liberalism and yet, in the moment of its defense, was wont to call all of its critics "liberal" simply because Unruhe appears to assume that any criticism of his position, which in this case was simply his private right to use a certain word that had offended others, is essentially revolutionary simply because he believes it to be so.  Not only was this an obvious rejection of criticism/self-criticism––an unwillingness to be even marginally self-reflective––but it was also defended by Unruhe's bizarrely proud claim that he did not belong to a party.  Indeed, he even went so far as to claim there could be no real maoists in North America, appealing perhaps to an understanding of third worldism that, at least I would assume, even most third worldists would find cringe inducing.

But someone who claims to be a maoist should recognize that one is only a communist if s/he: understands the importance of being part of a revolutionary organization and aspires to be involved, in some way, with a revolutionary party; desires to serve the people rather than hirself; accepts the need to be held to account by the party and the masses.  One is not a maoist simply by dressing in communist drag and confining hir activities to a youtube channel (or blog for that matter), and this is simply an historical fact: collective life, for the historical communist movement, has always been treated as far more significant than individualistic life.  Willful isolation can only lead to an atrophied politics where one is trapped in hir private echo chamber, consistently validated by the repetition of untested and disconnected ideas.

So this is a problem that goes far beyond MRN.  Internet leftism is hampered by this dilemma since so many online communists are writing and debating from the isolation of home [and in my case really late at night], fiercely devoted to our often unquestioned positions that we only assume are critical.  We often do not have a chance to experience line struggle and criticism/self-criticism which can only happen in a full and thorough sense outside of the online world in an organization that is trying to embed itself in the masses.  After all, our arrogance online does not belong in a healthy organization or amongst the masses; organizations that treat people with arrogance and disdain are organizations that degenerate and sometimes collapse.  In the online world, even after public meltdowns, we can still keep our arrogance: we do not always know the people who critique us, our responsibility is dispersed, we can easily get rid of one unpopular identity and replace it with another, and our politics can remain abstract.  The fact that Unruhe seems to reject the possibility of participating in a communist organization in his social context might indicate that he wants to remain beyond organizational criticism by eschewing collective life.  That is, by eschewing communism.

At the same time, however, there is a tendency to self-righteously denounce those who make errors and treat them as beyond rectification.  This is the legacy of identity politics that, regardless of its initial aims, has begun to devolve into a praxis of denouncing people who use the wrong words and do not behave according to politically correct standards.  In this context some people are generally treated as if their essential privilege places them beyond rectification.  In this context the use of problematic words are treated as a meter of political worth; we often forget that this language idealism obscures a very real politics: sometimes people who lack a certain access to a privileged language, due to their class position, will say fucked up things even if they do not believe the politics these words often express; sometimes people who know all the right words will actually have fucked up politics that they are able to hide, due to their class privilege, with the correct language.  If we actually plan to involve ourselves with the masses then we can't complain when they speak in the wrong way and don't understand the politically correct rules of speech––what should be most important for us is whether or not they understand why the material circumstances that produced these problematic patterns of speech are wrong and must be smashed.

So the fact that the MRN meltdown was initiated by criticism he received for the use of a problematic word is not the problem; the problem was his incorrect behaviour where, instead of trying to make sense of the criticism, he decided to publicly advertise his right to exist beyond criticism and that this right is somehow properly maoist.  In a word: liberalism. Unruhe rejected all criticism, the basic principles of collective life, and defended his "right" to be erroneous.  He made proud proclamations that he was not part of a party, demanding to be exempt from critique, and reified the bourgeois private sphere.  Then he tried to argue that it was liberal to point out his liberalism, which is really quite laughable but maybe understandable considering his apparently willful isolation.

Of course, it needs to be said that self-righteous chastement of MRN may also be part of the same problem: imagining that we are also incapable of errors, and that the rectification of those who "cross the line" is impossible, means that we have placed ourselves beyond critique.  I know that I have often made errors and, though it is sometimes very difficult for me to admit this fact, I am certain that if I did not possess some level of a collective life that held me to account, I would also be in danger of vanishing into the false certainty of an echo chamber.

Is it possible for Unruhe's behaviour to be rectified?  Yes: no one is beyond rectification.  But this would require self-criticism, a willingness to deal with his behaviour, and most probably an organization capable of demanding that he be held to account––something he would also demand in return.  So if he wants to be a communist in practice rather than simply in theory, then he should try involving himself in a revolutionary organization in his social context rather than making the typical LLCO excuse to do nothing. [Update: the accuracy of this statement about the LLCO has been questioned by a commenter… this was a spurious statement and I should be clear that the LLCO does not make excuses to nothing regardless of what I think its line amounts to.]  But this should also apply to all of us who define as communist.