January 05, 2013
I want to start this post by noting two tendencies of imperialism that are often treated as irreconciliable contradictions but are dialectically interrelated: 1) the tendency of super-profits gleaned from the export of capital to allow for a greater measure of social democracy at the centres of global capitalism (and thus what is sometimes called "the labour aristocracy" or the "phenomenon of embourgeoisment"); 2) the bourgeoisie's search for profit tends to result in the phenomena of down-sizing, of laying-off workers at the centre and breaking unions in order to harness cheap labour in peripheral nations or in migrant populations that have been forced from the peripheries to the centres.  The over-emphasis of either tendency results in a failure to understand the export of capital in totality.

Clearly, to speak of the first tendency at the expense of the second is to ignore reality.  In this period of capitalist crisis, labour unions at the centres of capitalism are being broken and oft-times, in some areas, it is difficult to see how there can be a labour aristocracy.  Capitalists, being capitalists, do not care as a class for social democratic reforms because these reforms get in the way of profit––the fact of exported capital means that they can and will lay-off first world workers in order to hire cheaper and more exploitable labour since greater exploitation means greater profit for the bourgeois class.  We might speak of a "labour aristocracy" as an aristocracy in relationship to global labour as a whole, but the bourgeoisie recognizes no aristocracy beyond its own class rule: this is not a holy estate that needs to be maintained by the guardians of capital––it is always threatened by crisis.

And yet to speak of the second tendency at the expense of the first often leads to the assumption that the theory of a so-called "labour aristocracy" does not exist because either: a) all workers are generally exploited equally; or b) that workers at the centre, because of down-sizing and jobs given to workers at or from the peripheries, are somehow more exploited because their livelihood is being stolen by workers elsewhere due to the export of capital (in a previous post I argued that this argument was absurd because it simply, reductio ad absurdum, reinstates a chauvinist theory of the labour aristocracy where the workers at the periphery, because they are somehow "stealing" jobs are the labour aristocrats and the laid-off workers at the centre are their victims).  But if all workers were exploited equally, then why would down-sizing happen in the first place?  The logic of exporting capital at the expense of union breaking and lay-offs in the centre is because there is more profit to be made at the peripheries.  And why is there more profit to made at the peripheries?  Because there are no aspects of social democracy––that which is only possible at the centres of capitalism because of imperialism––and thus a more exploitable work force.

As a class, capitalists cannot exist without exploitation and this is why, regardless of lay-offs and union breaking, workers in and from the periphery are exploited at a level beyond their core counterparts, even those who have been laid off.  Indeed, the laying off of workers at the centre is somewhat incidental to the mechanism of exploitation that generates profit here since profit is the surplus exploited from the value creation of workers––in this context, a super-exploited work force at and from the peripheries.  Laid off workers might form part of a reserve army of labour in the global centres, their laying off might even contribute to the value generation that produces surplus, but this very important point remains: if they had never been unionized, had never been in a context where welfare capitalism and its labour laws were possible, then they wouldn't have been laid off in the first place.  That is, down-sizing and union breaking happens, especially during times of crisis, because the labour aristocracy is in the way of profit.

Here it is important to examine how the labour aristocracy emerged, and to understand its general nature, in order to make sense of these contradictory tendencies.  First of all, it needs to be said that a labour aristocracy does not exist because of some capitalist conspiracy to intentionally buy-off the working class at the global centres––that is, capitalists did not get together one day in some illuminati-esque chamber and decide "hey, these workers of ours are getting uppity and we can deradicalize them through the export of capital and sharing the super-profits we make at the global peripheries!"  And though it might seem bizarre to point out how the possible existence of a labour aristocracy is not a conspiracy, it needs to be said because sometimes both advocates and detractors of this theory speak of it in such a way.  There is this assumption that there is a simple one-to-one ratio of super-profits to workers and that this defines the labour aristocracy.  But capitalists as a class are not interested in sharing out their profits, super or otherwise, because sharing profit is abstractly speaking not a very capitalist thing to do.

The historical emergence of a labour aristocracy, as I've mentioned in numerous posts (including the one linked above), is partially due to working-class struggles at the centres of capitalism.  Since capitalists will never give up any profit without a struggle, then the only reason this class did allow for the existence of a labour aristocracy is because they were made to allow for its existence in the process of class struggle.  Labour laws, unions, and every social democratic reform exist because of working-class struggle and not because capitalists wanted to play nice.  Nations at the centres of capitalism were forced to adopt forms of welfare capitalism; there were struggles in factories and in the legal arena that won workers the right to unions and other pro-worker, however mild, labour laws.

At the same time, however, the only reason these reforms were possible without breaking the boundaries of capitalist hegemony was because capitalists were able to find a way to persist as a class through the export of capital and thus the recovery of profit at the global peripheries.  Social democracy, where it exists and to whatever degree, is permitted because: a) it was forced into existence by concrete struggle and thus needed to be recognized by the "equal rights" (where greater force decides, as Marx points out) of bourgeois law; b) the loss of surplus could be circumvented through the export of capital and super-exploitation elsewhere.

In those belle epoques of capitalism, then, a labour aristocracy lives large at the centres of capitalism because capitalists are able to recuperate their profit at the peripheries without de-pacifying a first world working-class that is still slightly exploitable.  If labour laws mean I have to run a factory where I only receive a few dollars of surplus every hour from every worker, and yet I have the capital to also run factories in places where I can receive ten or twenty times that surplus, then I will not rock the boat of labour in my country; I will happily make a little surplus in one space (a little, of course, which translates often into millions) while, at the same time, making a lot of surplus elsewhere (multiple billions) even if it is annoying.  Of course, the temptation will always be to down-size and move my entire site of capital to those places where I can make the most, or spend time and money breaking unions and lobbying for anti-labour politicians at home, but I still have to deal with the fact of bourgeois legality.

So when we speak of a labour aristocracy we are speaking first and foremost of a structural context that exists because of super-profits gleaned from the peripheries––the context of welfare capitalism, of social democracy, of even democracy itself.  Not some simplistic situation where capitalists share their profits with first world workers to intentionally buy them off.  They are bought off, yes, and in the buying off the imperialist centres are able to sustain themselves ideologically, but this has to do with the wider social relations than some direct mechanism of bribing––the bribing is the result, not the cause.

But we know that, at times of crisis, capitalism becomes monolithic, fascistic, and turns against the very social democracy that only exists because of imperialism.  In these periods social democracy is attacked, is revealed to be nothing more than a superstructural concession, while imperialism also intensifies.  Capitalists close ranks and, unhappy with the concessions they made in their home nations, do everything possible to recuperate as much profit as they can––and this is where the tendency of down-sizing, union-breaking, and everything that supposedly contradicts the theory of the labour aristocracy comes into play.  Social democracy is challenged and thus a working-class that experiences a level of privilege (unlike their peripheral counterparts) due to said social democracy finds its stability challenged.  This is all part of the normative export of capitalism within the overall context of capitalism's logical functioning: sometimes there can be a labour aristocracy, sometimes it needs to be shattered, and in both cases imperialism continues untrammelled––despite down-sizing and union breaking at the global centres, where the so-called "labour aristocracy" is being reproletarianized, the most heinous forms of exploitation crescendo at the global peripheries. 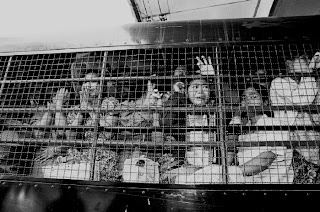 That this context of labour aristocracy––because it is generally a context––can persist despite the tendency to down-size and union break, however, is something that needs to be recognized.  A few days ago, for example, some of my working-class family members were complaining that their labour was casualized because "all of the good jobs" were going to "foreigners".  And yet these foreigners, these migrant labourers, are people who, unlike my family members, would never receive public health care, welfare benefits, proper working days, and are often here on guest-worker programs.  They are supposedly "stealing jobs" and yet they are "stealing" nothing but the right to be exploited whereas those whose jobs they are stealing can still benefit from the social system which, through the legal mechanism of taxes and a context that exists because of imperialism, provides a better life.  Thus, at this point in time, even laid-off my family members remain a labour aristocracy in comparison to those people who are "stealing" their jobs.

But let's go back further into the history of the country in which I live, to that point where a labour aristocracy was just emerging against the wishes of the capitalist class.  When Chinese workers were brought to Canada to build the railroads they ended up in conflict with the already established anglo-saxon dominated unions of railroad workers.  Indeed, these workers were imported to break these unions, to mobilize cheaper and more exploitable labour, back at the slow dawn of Canadian social democracy.  The already established unions, however, did not try to fight this undermining of their union rights by recruiting Chinese migrant labour; instead, refusing to "pollute" the white unions with "foreign" workers (and yes, there were instances when they closed union membership to prevent Chinese admission), they treated migrant labourers as their enemy––as undesirables to the labour aristocracy they were building.

Thus, the knee-jerk protectionism that is often treated as "progressive" by the average social democrat has been a hallmark of capitalism since the early days of capitalist imperialism… In early 20th Century Canada, amongst a predominately white supremacist [settler] working-class that was slowly struggling to become a labour aristocracy, is it unsurprising that the song White Canada Forever was popular amongst the working-class at the western end of the railway?  And were the migrant workers whose guest-worker activities resulted in the laying-off of white Canadians somehow better off than those embattled union members who were threatened by their employment?  These questions, obviously, are rhetorical: the tendencies intersect, reveal themselves to be a single tendency all along.