The Problematic Forms of Anti-Capitalism Today [Guest Post from a talk by Comrade B.]


[The following is the transcript of a talk delivered by Comrade B. on Wednesday, March 14, 2012 as part of a panel, hosted by the UofT branch of the "Platypus Society", on which she was invited to participate.  She was probably the only revolutionary communist, let alone maoist-identified, activist on the panel but, although this might have made her look "crazy" to some of the people in attendance (predominantly members of the academic/activist community in Toronto), PRAC members and supporters formed around 50% of the audience.  When I asked her if I could post the transcript of her talk, she asked if I could mention that her paper was  partially developed in collaboration with another comrade, D., who is currently out of country but who was apparently a great help in this paper's construction.]

I would like to start with a quote from Ulrike Meinhof of the Red Army Faction who, loosely quoting Fred Hampton of the Black Panthers Party on his position on the American War in Vietnam, said in Berlin May 1968:

This quote invites us to evaluate the contemporary forms and expressions of resistance, as seen in the New Left movements of the late 60s, the anti-globalization movements of the late 90s, and of course, the mass revolts we saw in 2011. And so if we consider the tidal wave of mass uprisings, riots, and resistance, [from the Arab Spring, to the Indignados movement in Spain, to the workers and popular class struggles against austerity in Italy, Portugal, Greece, the London riots, and to the #Occupy movement right here in North America, to name only a few] we question to what extent these have been successful in ensuring that “no one else goes along with it anymore?”

I think one of the main problems confronting the “resistance” movements today, that which prevents it from developing further and better, is the constant slippage of resistance into reformism, whether deliberate or not. Despite the genuine will of people to resist the injustices meted out by the capitalist system, there is often the default recoil to the ideology and politics of social democracy in the current attempts to resist austerity, this being the case in Canada. This is not to critique any particular group or sector, but is a general assessment that behooves those of us that want to see the abolition of capitalism and its apparatuses of exploitation and repression to think through these contradictions between reformism and revolution. Certainly, we cannot dismiss efforts among the activists that are fighting to protect the gains that have been won by the working class and popular masses through hard-fought struggles in the past, for these are in the immediate interest of workers and people who are more and more impoverished as the crisis continues to unfurl.

Yet, it’s been clear that during periods of crisis, the bourgeoisie will find ways to consolidate in order to preserve its long-term interests and hegemony. Capitalism has proven itself adept in co-opting or neutralizing resistance, so the ruling class will make the minimal concessions necessary whenever it feels its interests and hegemony are seriously threatened. We need to understand that Keynesian economics has always worked in the service of the bourgeoisie. The industrialized imperialist states experienced a period of prosperity after WWII and were able to offer social benefits to their working and popular classes, thanks to the superprofits, which the bourgeoisie was able to extract from imperialist ventures in the Third World and pockets of the Third World in the First World.

These “resistance” movements, often the embodiment and expression of the rage and frustration experienced by the exploited, marginalized, and oppressed in imperialist citadels, are constantly at risk of being co-opted by various forces representing different and competing class interests, whether they be trade union bureaucrats within the labour movement, mainstream bourgeois parties that claim to represent the interest of the workers, elements active inside the grassroots and community movements, and the rise of the NGO type not-for-profit industries that rarely go beyond a politics of radical liberalism and reform. These forces, among others, contain and manage the widening contradictions in the belly of the beast, and in the service of the status quo by dragging the “resistance” back onto the legal and parliamentary terrain. They are incapable of producing radical, fundamental social transformation.

I want to echo a comment made by the Canadian Revolutionary Communist Party [PCR-RCP] representative at the 3Rs panel in Halifax: the point perhaps is not about critiquing these “resistance” politics and those who refuse to go beyond them, but that the problem occurs when forces want to preserve the movement as it is, instead of pushing it further by developing a consistent framework and practice through which the revolutionary alternative will appear and gain the upper hand.

This segues me into the next section of my commentary, having to do with our actual practice.

We wouldn’t be very good communists if, in the words of Mao Zedong, “we have correct theory but merely prate about it, pigeonhole it and do not put it into practice, that theory, however good, is of no significance. Knowledge is acquired through practice and must then return to practice.”

I therefore submit a contentious claim for discussion that presently in Canada one cannot say there is resistance; but there are certainly protests—and this applies to those of us sympathetic to the PCR-RCP.   I just also wanted to make clear that the Mohawk national liberation struggle in Kahnesetake in early 1990s, or other protracted First Nations struggles in Caledonia and elsewhere, are exceptions, but cannot justifiably be categorized as "Canadian".

As one of the founding members of the Proletarian Revolutionary Action Committee [PRAC], a group of us attended the 2nd Canadian Revolutionary Congress initiated by the PCR-RCP in December 2010. We work with the PCR-RCP in developing a consistent and long-term framework for a communist theory and practice, to generate an experience of proletarian struggle. It became evident for those of us in the PRAC that only by building a party, revolutionary and mass organisations, and a revolutionary united front that has a clear platform that such a shift from protest to resistance can occur. Our aspirations, and we know the path ahead of us is long and foggy, is to build a true proletarian democracy that would necessitate the abolition of capitalism and which could advance the class struggle to achieve communism.

Members of the PRAC are united on 4 points that aim to restart a new class struggle in Canada. [Which you can find on our website, as well as the full document produced at the 2nd CRC] In summary these are:

1)    By uniting proletarians all across the country on the basis of breaking with bourgeois politics, on the basis of the revolutionary struggle against capitalism and for the goal of communism;
2)    By supporting the struggles of the Native nations against the Canadian state and by recognizing their unconditional right to self-determination;
3)    By denouncing Canadian imperialism and its companies, which loot and destroy the peoples and resources of the oppressed countries through economic exploitation and war;
4)    By calling for the defeat of the imperialists all over the world and by defending and supporting people’s wars.

The PRAC takes from the PCR-RCP programme the necessity of reaching that section of the working class that the PCR-RCP refers to as the hardcore of the proletariat; the nucleus of potential revolutionary forces are to be found among the most exploited workers: immigrant and migrant labour, native proletarians, the youth of the proletariat and doubly-oppressed women. The social groups, according to Statistics Canada, facing the highest level of poverty are among the First Nations, the racialized “minorities,” and people with disabilities. We seek to reach into these groups by applying the mass-line, because it is on their support and leadership within the Party that will lead the proletarian struggle.

In practical terms, PRAC along with Party units in Ottawa, Toronto, and the province of Quebec launched a controversial campaign calling for the boycott of the 2011 Federal Elections. We went to proletarian neighborhoods with our bimonthly newspaper, Partisan, to discuss with anyone willing to talk to us about their thoughts on the election and what change they would like to see. We explained our position and why we are calling for boycott. Interestingly enough, within these pockets we did receive praises and support; one older woman of colour even told us that we should have started this campaign back in January! Interestingly enough, those that were the most opposed to our campaign were not those in reformist left organizations, although they were pretty upset, but surprisingly, among those who identified as anarchists, socialists or communists. Now there are a lot of fruitful critiques of the campaign that we received from our friends and comrades, and many are correct in their criticisms, but on the whole, this campaign, we feel, helped educate us on how to apply the mass-line in our political work in the future.

Our Revolutionary Students Movement [RSM] members have been running monthly Communist Night School to address contemporary issues and to help build a communist analysis from reading stuff you wouldn’t normally read in school, stuff that comes from the International Communist Movement, in addition to classic texts. We do this because the education system remains under the tutelage of the bourgeoisie.

Our attempt to build communist internationalism included a report-back on the revolution in Nepal, a demo in front of the Indian embassy in Ottawa to denounce Operation Greenhunt and to support the Maoist/Naxalite people’s war, and just recently an event to promote and support the Communist (Maoist) Party of Afghanistan. 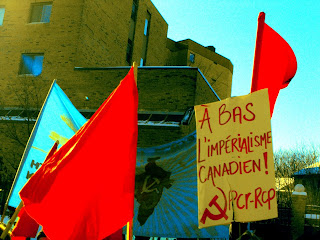 Our future campaigns will focus on the youth of the proletariat and connecting student struggles to the class struggle. Just recently, the official unemployment rate for February in Canada remains at 7.6%, but among the youths aged 15-24, this rate more than doubles. It’s at a staggering 14.6%. Here comprises the reserve army of labour, where youths are assigned low-paid, low-skilled, and precarious part-time and split-shift work where they can only get by, if that, considering the increased costs of living. Among those returning to school, students among the working class can expect enormous debt loads by the time they graduate. However, with no economic recovery in sight in the near future, we can expect that there will be some heating up of wide protests to which we among the PRAC exclaim: “It is right to rebel!” But we also add, “it is necessary to build to resist!”