Down with Activism; Up with Revolution

February 03, 2012
Having been part of the mainstream left for years––roaming between organizations, marching with various contingents in demonstrations, participating in social unionism in different ways, joining affinity groups, losing sleep over meetings––I have had enough time to grow increasingly frustrated with activist culture.  It is unsurprising that so many activists either burn-out or turn into banal social democrats.  Once I used to feel as if those who dropped out were guilty of political betrayal, but now it is difficult to see their decision as much more than a product of the culture cultivated by leftwing activism at the centres of capitalism.

There is a rather particular attitude cultivated by activist culture.  Infantile, self-righteous, judgmental, and above all a lack of self-criticism.  By focusing on the problems with society (sometimes correctly, sometimes incoherently) it is easy to imagine that we are pure––smarter and better than the ignorant masses who often lack the same opportunities and time to be part of a largely student, academic, or at least upper strata (unionized) sectors of the working class.  Often petty-bourgeois in the worst possible way, we focus on banal "anti-oppression" concepts that tend to preserve oppression and solidify divisions––the practice of criticism/self-criticism that is designed to create ideological and practical unity is treated as antiquated, unknown, or somehow "oppressive".  We imagine that we are extremely critical rebels even when we adopt the most mainstream notions of rebellion, liberal ideology dressed up as radical. 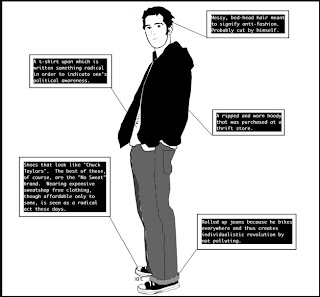 More importantly: we imagine that we are revolutionaries when we are nothing more than temporary rebels.  Activism is far from revolution, and the left at the centres of capitalism is dominated by activists and activist groups––NOT revolutionaries and revolutionary movements.  The most popular and predictable activist strategies, which haven't changed or succeeded since the 1960s, are constantly re-imagined in an amnesiatic haze as "new" and "important".  Serious revolutionary strategies, proven by history and still the concrete practice of those engaged in the most developed revolutionary struggles, are scornfully misunderstood by the semi-liberal and semi-anarchist ideology of those activists who disdain formal structure and foolishly imagine that their beautiful anti-vanguard spontaneity will one day succeed where it has always failed.

(On a related note, it is worth checking out a recent Signalfire post complaining about activist obsessions with new theories that are neither new and are really only "tediously opportunist" and that echoed some of my own complaints, most recently the one about organization, in less long-winded manner.  The author rightly concludes "revolutionary theory worthy of consideration is the product of successful revolutionary practice and nothing else.  It's not a question of restricting oneself to a closed canon; we are happy to pay close attention to the writings of Amilcar Cabral, for example, because he won a war.")

Activist circles, always rotating but always the same despite arguments to the contrary, tend to be insipid little spaces where everyone imagines they are participating in something big and liberatory when they are [correction: we are] students playing at revolution.  The spaces remain the same spaces that just self-replicate different versions of the same movement, never growing beyond a predominantly petty-bourgeois population; the strategies are different variations of previous strategies; no one has to ask the hard questions about what pursuing a revolution means because the strategies and ideology are such that both the questions and the answers are blocked by a pseudo-anarchist and semi-autonomist discourse of building coalitions, non-heirarchical structures, and unscientific/ahistorical metaphors that sound good but mean nothing (i.e. "we're all drops of rain and together we'll add up to a great flood of freedom").

Moreover, the petty individualism and cliqueism fostered in the activist scene demonstrates the petty-bourgeois and opportunist boundaries of our politics.  Those who use the right words, dress in the proper manner, chalk-up temporary arrests that everyone else has to work hard to fight, and who can generate the proper amount of activist cool are allowed to label themselves "revolutionary".  But you're not revolutionary if you're playing the same tired activist game: if you're just organizing affinity groups, if your demos are about social democratic rights, if you're refusing to involve yourself in revolutionary discipline, if you're twisting identity politics discourses in order to hide the fact that your parents are wealthy and paying for your condo, if you are incapable of self-criticism, and if you have never once tried to work in a revolutionary structure that asks the hard questions, and tries to solve these questions, about revolutionary war and seizing state power.

The first time I ever met a revolutionary I was shocked at the gap between our practice at the centres of capitalism and her practice on the peripheries.  This was back when the revolution in Nepal was still at its apex, before the party had begun to demonstrate the degeneration that might now cause it to falter and die, and the revolutionary in question was Hisila Yami (Comrade Parvati) who was visiting Toronto to discuss the current moment in Nepal's revolution.  Here was a revolutionary who had participated in a protracted peoples war, who had used her experience in this war to write revolutionary theory about gender and revolution, and her behaviour and attitude was alien to the pseudo-revolutionary subjectivity of the activists I had known.  Humility and discipline, criticism and self-criticism, an unflinching attitude towards the need for communism, a unity of theory and practice, and most importantly a refusal to be arrogant when she was firm.  Since then I have encountered and worked with other people with a similar stance, a professionalism towards revolution that does not reduce it to a student game, and I really hope that I can learn from these people so that one day I can shed my own petty-bourgeois activist ideology and practice which has become severely habitual.

When I think back to the anti-globalization movement, and the 2001 FTAA protests in Quebec City, I am only appreciative of the fact that I was further radicalized.  Thankfully my experiences in this movement eventually led me to ask why it produced nothing significant in a revolutionary sense, despite historically revisionist claims to the latter, and why a mass movement was incapable of doing anything except having multiple massive demonstrations and then falling apart on September 11, 2001. Here was a movement that had its leaders, though it pretended otherwise, an in-group of cliquish activists who imagined that they were revolutionary but who mistook revolution for running around in tear-gas and screaming that "the whole world is watching."  If they were proper revolutionaries they would have tried to have some foresight, tried to turn this movement into something sustainable that could actually try and produce revolution––but if you aren't interested in the practical and concrete questions surrounding revolutionary struggle, the questions every significant revolutionary movement has had to ask and try to answer, and imagine it's just going to happen like a beautiful flood composed of unique raindrops, then you're not performing revolution.  You're performing protest and activism, and maybe you should be blamed for having allowed a movement die because you wouldn't allow it to be properly structured.

For your theory is not revolutionary if it tells you exactly what you want to believe: that the seizure of power isn't necessary, that you can keep doing the same micro-politics you've always done and that ultimately changes nothing––that speaks of a better world but allows for the persistence of this world by refusing to approach the strategy of revolutionary war in a coherent manner.  Nor are you revolutionary––nor am I revolutionary––because of a blog that talks about these things, a prolonged involvement in internet debates, and/or a website substituted for a concrete organization.