Vote With Your Feet: Boycotting the Federal Elections (part 1)

March 14, 2011
An upcoming event that I'm helping organize has begun to stir up some controversy amongst the leftwing activist population of my city.  This event, provocatively titled "Don't Vote, Fight" (or alternately, "Don't Vote, Organize"), is a workshop designed to discuss the possibility of boycotting the upcoming Canadian federal elections as a strategy of building revolutionary politics and fostering revolutionary consciousness.  This elections boycott movement was run in Quebec during the last federal elections by a coalition led by the Revolutionary Communist Party of Canada.  The point of the movement is to draw a dividing line amongst the left––not the social democratic or liberal left but the elements of the left that claim to believe in revolutionary politics––and already, amongst those who are notified of the upcoming (March 19th) event, the dividing line is becoming clear. 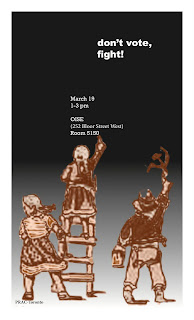 In retrospect, I think the event should have been titled "Vote With Your Feet" because not only does it get to the theoretical heart of the boycott but it avoids the knee-jerk response of those leftists, socialized to be good social democrats regardless of what they say they believe, who find the very notion of a possible elections boycott abhorrent.  It also avoids the straw-person response that, just by looking at the title and not reading the explanation that often accompanied the above picture, assumes that we are making some sort of false dichotomy.  One asinine response on the Facebook invite, for example, was "vote and fight"––but this was a response by a member of an imbecilic entryist group that imagines revolution will come by infiltrating bourgeois parliamentary parties.

No election in the framework of bourgeois democracy will transform the army, the police and justice to put them at the service of the exploited.  We have to prepare for this confrontation, not with unarmed pro-bourgeois parties, which the State can easily ignore.  We must prepare by finally building a revolutionary party serving the oppressed that will not be afraid to say: the bourgeoisie will never abandon its power by itself!  The majority has to seize power by the force of its numbers and defend it by every means necessary!  Against elections, let's prepare the revolution!