September 28, 2010
Recently, perhaps because I want to be annoyed and angry, I've been reading posts on websites devoted to the alarming American fascist movement down south. Aside from finding them frightening, I'm also mystified by their utter stupidity. (My pet peeve is their "Obama = Marxist" equation that is followed by their "Socialism = National Socialism" claim that ignores the fact that, really, they're the fascist movement.) In fact, they are often willfully stupid and proud about being stupid - why else would their ideologue, Glenn Beck, denounce intellectuals and academics on a regular basis? Funding public schools is a communist conspiracy, so ignorance is an American freedom... 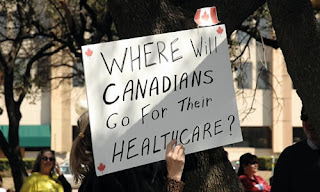 Um... We would go to our better hospitals in Canada I would assume. Where we get medical care for free. Aside from whacko libertarians, Canadians tend to be happy with their health care system. If anything, we don't like the fact that privatization is creeping back in, that some services are being delisted, and that hospital boards are being filled with corporate-thinking bureaucrats.

But apparently this Tea Party expert thinks that all Canadians would prefer to fly to the U.S. hospitals, spending an exorbitant amount of money, for their medical needs. I suppose extremely wealthy Canadians might do this, but that's kind of the point of free medical care: it's accessible to people who are not wealthy. 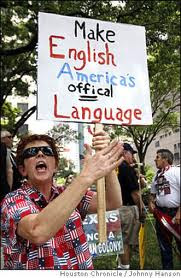 This racist anti-immigrant sign should really read "Make The English I Learned in Poorly Funded American Public Schools America's Offical Language." The "offical" is even underlined to emphasize, perhaps, the willingness to shirk spelling laws imposed by some cabal of intellectuals. Laws that prevent American freedom, unlike those anti-immigrant laws this sign wants to pass.

Also note the weird "Texas is not a UN Colony" sign behind our proud defender of English "officaldom" - I am not sure what this means, but it strikes me as creepy. Maybe not "offically" creepy, but still creepy. 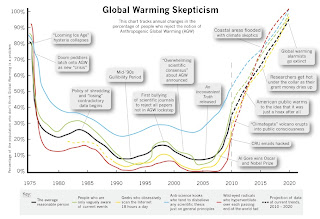 Here is a chart where some clever right-wing pundit who thinks he knows science better than scientists (thanks to Creationist "experts" with their degrees from Mormon universities) has detourned a chart originally intended to mock anti-science morons who don't believe in climate change.

Trying to sell ignorance as science through the medium of humour would have worked better had this chart actually been funny. That's the problem with the right: they just aren't that funny. In order to do satire properly you sort of need to have a basic understanding of reality. What is funny, though, is the entire attempt to mock science and pass it off as scientific. 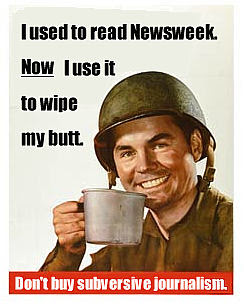 And then sometimes their attempts to be funny end up becoming unintentional self-satire. Aside from the fact that right-wing humour can really only reach the sophistication of potty humour, this is bloody hilarious. They actually have a soldier smiling and talking about how he doesn't read the news. A soldier who hates "subversives" and uses a news source, that is only "subversive" because it contains news, as toilet paper. And doesn't he seem so much happier now that he has reached a state of ignorance?

Someone really needs to fill me in on Newsweek's apparently leftist cred. I mean, I was unaware that it was "subversive" - weren't they using embedded reporters in Afghanistan and Iraq just like everyone else? I suppose the fact that they report on anything mildly connected to reality makes them a target for rightwing stupidity.

This one is extremely confusing. Yet another attempt at right-wing humour in a pseudo-advertisement for immigration designed by some anti-capitalist living in the "socialist" world Obama supposedly represents... This is baffling and offensive on multiple levels. I mean, you try to work it out.

First of all, this doesn't work from a design perspective. I mean look at it! It's like something designed by a third grader who accidentally opened up Photoshop. (Correction: ninth grader if we're talking about seriously underfunded American public education.) What's with the picture of people swimming in a bay? What's with the dollar signs exploding around the second picture? Nor do those colours really work: it's a rainbow palette of reactionism!

Secondly, I don't really get the "no fat people" comment. It follows a list of things that aren't so bad... Perhaps the author couldn't really satirize something as logical as "sustainable forests" and "social responsibility" (which makes you wonder why he threw these things into his faux ad in the first place) so he added the "no fat people" to show that socialist demands can all be dismissed because socialists do not like, for some reason only the author knows, fat people.

This is followed by "13 Year-Old Girls" who "know their place"... What does that even mean? The left wants to control 13 Year-Old Girls? More than the bloody right that blathers incessantly about old-fashioned family values? (Actually I think this pseudo-ad was probably made by a 13 year-old.)

And then suddenly it's some racist complaint about Somalian immigration, which doesn't really work thematically. The big gag, the punchline of this "joke", is that this is some immigration pamphlet given to Somalians... Or will be once socialism takes over... Or maybe this is what Somalians are supposedly saying about U.S. post-Obama... Or... Argh... this reactionary attempt at humour is so confused it's giving me a headache.

Look at the other list of complaints. If this is satire then the author in real life must like "hypocritical lifestyles" and racist denial (the offensively named "competing for 'brown friends'"). Perhaps he believes that it is his right as an American to be a hypocrite. He also must like crowded jogging paths.