The Sad "Knowledge" of Urban Dictionary

August 18, 2010
I was under the impression that "urbandictionary.com" was a site for looking up definitions for popular slang terms. Boy was I wrong. Not content to provide definitions for vulgar argot, the Urban Dictionary folks now like to define historical personages, concepts, and everything they know absolutely nothing about. At least wikipedia entries, despite the ideological/historical problems there, have some semblance of historical facticity (some semblance); urbandictionary.com, however, is, well...

The following are my favourite stupid definitions. 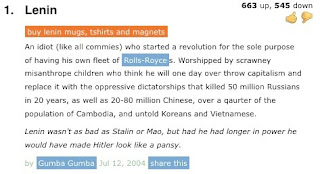 This one is posted by the brilliant historian "Gumba Gumba" who has enlightened us with the little known fact that Lenin was a car collector. Apparently this was the "sole purpose" for the Russian Revolution... I knew it! "Screw the tsars and their feudal methods of transportation," said Lenin, "I want to start a revolution so that I can collect Rolls-Royces, an entire fleet of Rolls-Royces, and be able to drive them, convoy-like, through the entire nation! Mwa-ha-ha-ha!!"

But Lenin was not just a car collector. He is the prime deity of children from the nation of "Scrawneymisanthrope" who pray to his spirit for the overthrow of capitalism. For he will return "one day" to create another "oppressive dictatorship" where not only millions will die (apparently the children of Scrawneymisanthrope want millions to die) but will be adequately suited to his fleet of Rolls-Royces. Who are the over 600 people who liked this, by the way? 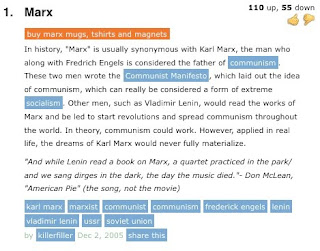 The opening sentence of this one reminds me of a student paper: Marx is usually synonymous with Karl Marx in history!!

But killerfiller, the intrepid scholar responsible for this entry, also ends his entry like a student paper with a supposedly profound insight about communism. Poor Marx and his dreams! It's too bad he didn't reckon with the awesome logic of the good in theory bad in practice argument. I love how this statement is written, like most arguments in first year university student papers, as if it is self-evident. I bet he also thinks that these last two sentences are profound and unique.

I also like killerfiller's choice of quote. Yes, a line from "American Pie" (and he is nice enough to remind us that he means the song not the movie!) really explains "Marx" to me. The day the music died indeed. 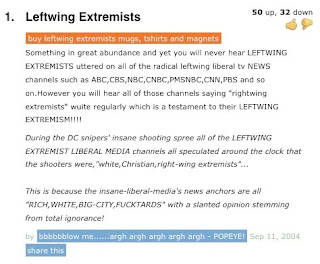 I like how the writer seems to think that the "liberal media" is an example of his "leftwing extremism." If only, urban-dictionary-scholar-with-a-rather-intelligent-name, if only.

He also thinks that his "leftwing extremists" are predominantly rich and white. Uh... well he's right about liberal news anchors being white and perhaps wealthy but how does that differ from conservative news anchors? And am I missing something or is the entire rightwing now composed of poor people of colour? Oh shit, guess I was foolish for thinking that anti-racist politics was essential to leftism. 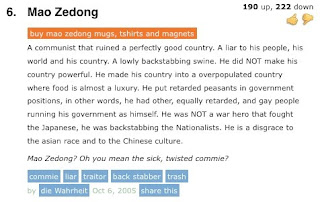 I suspect that die Wahrheit is a Taiwanese nationalist who, despite all historical evidence to the contrary, actually believes that it was Chiang Kaishek's Nationalist who did all the fighting during WW2. I'm sorry, Mr. Wahrheit, your friend Chiang Kaishek was actually the "lowly backstabbing swine" who preferred to kill communists while cutting deals with Japanese fascists. The man had to be kidnapped by his own generals, for crying out loud, to force him into a common front with the communist Peoples Liberation Army under Mao Zedong and Chou Enlai. Maybe that is the "backstabbing" you speak of: man, if only Mao and the communists just left Chiang Kaishek alone to order the slaughter of peasants and chum it up with Japanese fascists rather than "backstabbing" him and forcing him into a common anti-fascist front!

However, die Wahrheit, I'll agree that he "ruined a perfectly good country." I don't want to live in a country under "retarded peasants" after all, especially not if they're "gay." Nor do I want to live in a country where I can't beat my workers and life expectancy is more than 50 years and there are roads, and modern medicine, and education for "retarded peasants." (I think you meant the opposite about the food, though, guess you didn't fact check that one!) The "asian race," as you have so succinctly argued, is all about the cultivation of the gentry. 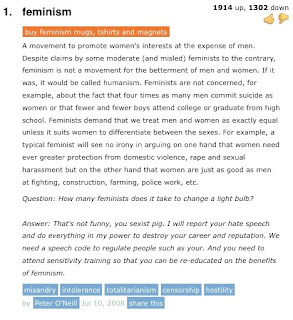 This one is so pathetic I don't know where to begin. At the least the author was proud and certain enough of his post that he appears to have given his real name: "that'll learn them feminists." I suppose he's pretty certain that no one can argue against his stellar logic: if feminism was really concerned with equality then "it would be called humanism." His perfect use of the conditional argument has me convinced of a worldwide Feminist plot. The reason that patriarchy still exists, I suppose, is because it is just an illusion used by those feminists in the shadow government to scapegoat poor men like Peter O'Neill.

And Mr. O'Neill has also figured out the secret contradiction inherent in all feminism: how can they say they're "just as good as men" and then complain about oppression? I would waste time trying to explain the concept of systemic oppression here, but it is a little difficult to fight against Peter O'Neill's evidence that is so ironclad he doesn't feel it needs any statistical documentation! It is young men, not women, who are oppressed! Fewer enter college.... I think you mean fewer than before, O'Neill, which (and I know this requires mathematical thinking on the part of someone who cannot understand basic logic) doesn't mean less than women. Or maybe you think it's oppressive that all [white] men aren't admitted to colleges simply because they're men: "what my maleness doesn't mean I'm 100% guaranteed a place in an institution of higher learning over some broad? I have to write an entry about the feminist plot on Urban Dictionary! That'll show them! That'll show them all!" I think this might be the story behind the post considering its American highschool level of understanding.

And then, not content to bombard us with his terrible logic, the clever author treats us with a joke about feminists screwing in a lightbulb. Which is actually funny considering that yes, I think the answer does apply to Peter O'Neill. 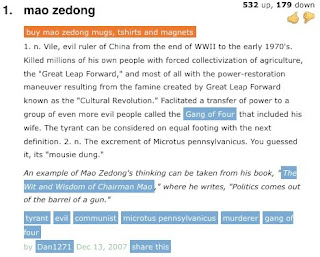 Sigh... I shouldn't be surprised by the whole Mao-the-mass-murderer myth that has now been repopularized by Jung Chang and John Halliday's rightwing trash.

I am surprised that 532 people like an entry that ends with comparing a Chinese name to vaguely similar english excremental joke. Mousie Dung. Wow. The height of humour. Dan1271 must also think it's a real chuckle fest to draw pictures of Mao in the most orientalist/racist manner.

And yet Dan1271 is the rarest of Mao scholars. He is such a good scholar that he owns the only copy of the imaginary book "The Wit and Wisdom of Chairman Mao." 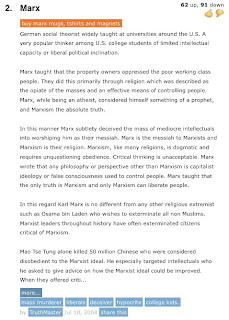 This is my favourite because how can I contradict the scholarly work of TruthMaster? If this was posted by the Master of Truth then it must be true!

And what amazing things we learn about Marx from the great TruthMaster... Marx taught in universities in America - I did not know that. Or that, for Marx, the ruling classes oppressed people "primarily through religion." Until TruthMaster set me right with his mastery of truth I was under the impression that Marx thought that oppression was primarily a problem of economic class. I guess not.

But wait a minute! That poor and confused Marx, he believed in oppressing people primarily through religion as well! Dogma and unquestioning obedience, that's what he believed! He just wanted to start another religion! He's just like Osama Bin Laden!

And then it goes on about Mao again. Also, if you check this one out, you'll discover that TruthMaster has pointed out the secret of the last American election. Voting for Obama is a Marxist conspiracy.