On the Failure to be Self-Critical

April 20, 2012
I have often been concerned with how communists should conduct themselves amongst the masses.  Some time ago I complained about that pernicious activist attitude to appear "more radical than thou" which is a common amongst the activist left.  That is, more experienced activists will work hard to cultivate an aura of radicalism, and work even harder to sneer at and belittle less experienced activists who are only beginning to learn that capitalism needs to go.  In this context, individuals will attempt to commodify themselves, competing to become the most important activist.  Rather than accept that becoming a revolutionary is a process, and that all of us require constant education and re-education, so many of us would rather pretend that we have already solved every question and are beyond criticism.

Ironically, those who demonstrate this authoritarian attitude are most often self-satisfied anarchists (a contradiction which helped push me away from my youthful anarchism) who disparage self-criticism as "authoritarian" and often retreat into some bastion of leftist purity as if they are Hegelian "pure souls"––beyond criticism, beyond ideology, beyond reflexivity.  But to be fair to anarchists, because I have never been too interested in anarchist-bashing here, so many self-proclaimed "communists" are guilty of the same self-satisfied radicalism.  Perhaps I'm more familiar with anarchists demonstrating this attitude because anarchists are generally more active at the centres of capitalism.  To be fair, since some species of communism is a more normative anti-capitalism for 90% of the world's population, this attitude of self-sanctification is prevalent amongst communists as well. 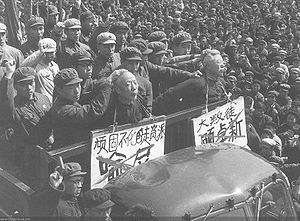 Because of this experience, one of the reasons I was drawn towards the maoist turn in revolutionary communism was its focus on revolutionary behaviour.  During the early days of the revolution, for example, Mao exhorted members of the Peoples Liberation Army to act in a communist manner amongst the masses.  Then we have essays like Combat Liberalism and On the Correct Handling of Contradictions Amongst the People (to name a couple) where humility and self-reflection were treated as proper communist behaviour.  The point was that bourgeois ideology produced selfishness and self-satisfied individuality; the goal was to produce a communist human who could possibly serve the people by putting the needs of the collective ahead of the needs of the self––a terrible thought for capitalist-minded individuals, especially libertartians, to consider.  Down with selfishness and up with humbleness!  Even supposed left anarchists sometimes, and stupidly, argue that the pursuit of the self is revolutionary.  But we communists and social anarchists know better; we understand that this is just more bourgeois ideology… And yet, if this is the case, how can we condone our refusal to annihilate our bourgeois selfishness in the other-centeredness required by communism?

Let's be clear: I'm not talking about an exchange of polemics with reactionaries, liberals, or possible revisionists.  I'm talking about our day-to-day interaction with others, in real life, either the masses or fellow lefties who, at some level, are in agreement with our politics.  And yet we often take confuse our behaviour in polemicization with our normative behaviour.  We imagine that we are beyond reproach and attack anyone and everyone who doesn't agree with our position; we tend to relate to others as bourgeois individuals rather than communists.  We are liberal, we lack self-awareness, we imagine that our politics are pure.

So maybe I should begin on the level of my own self and confess the following: I am infected with bourgeois ideology, I often place my own desires above the needs of others, and as a white and straight male with a certain measure of class autonomy I have unconsciously made mistakes (and will consistently require re-education and criticism) when it comes to concrete situations of oppression.  I know that I am not beyond reproach, but I am often unwilling to accept this fact.  Thing is, so many individuals amongst the self-proclaimed left are beyond reproach but refuse to admit that this is a fact.

The refusal of self-awareness––along with the refusal to accept that both ourselves and others require constant re-education and inter-solidarity––remains a significant problem for the general left.  Instead of humility and other-centeredness there is only arrogance and self-obsession.  An unwillingness to question one's presuppositions, a hatred of anyone who requires us to think rigorously.  By now I am extremely tired of self-proclaimed "leftists" who refuse to be challenged, who think their own presuppositions are revolutionary even if they aren't, and who unthinkingly dismiss any challenge to their individual authority.

Any resistance to debate and critical self-apprehension is infantile and/or arrogant.  Deflection and name-calling is juvenile and irresponsible.  Communists need to act with more humility and more awareness of the self… If we're trying to represent a world beyond capitalism, let's not act according to capitalism's self-obsessed categories.