April 25, 2012
Around two years ago, I wrote a post called Our Petty-Bourgeois Selfishness which was meant to serve as an introduction to a small series based around Mao's Combat Liberalism.  Unfortunately, perhaps due to my own liberalism, I failed to produce such a series.  Recently, however, I was reminded of that post and its promise when I wrote about the general failure, amongst the left, to be self-critical.  So now I'm going to try and deliver on the promised series, though maybe not in the way I originally intended, and we'll see how far I get. 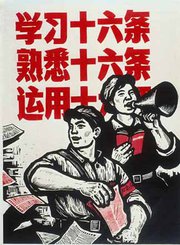 It seems to me that the instances of individual liberal behaviour described in Combat Liberalism tends to fall into two general categories.  The first is the liberal behaviour produced by general arrogance, the petty-bourgeois selfishness that, according to the dominant ideology of liberal capitalism, is natural and part of what it means to be human.  The second is the liberal behaviour produced by an unwillingness to confront the problematic behaviour of others in a principled manner; this is connected to liberalism for precisely the same reason that self-proclaimed "socialists" will go on about how it is wrong to stifle the rights of individuals, even if they're reactionaries, because of the liberal myth of free speech––the liberalism of "unprincipled peace" where communists, for the same of unity, will work very hard to become close comrades with reformists and social democrats.  Generally, I think most of us will err more on the side of one category or the other.  So while I'm guilty of both over-arching types, I tend to be far more guilty of the second.

In any case, Mao provides eleven examples of liberal behaviour that come from "petty bourgeois selfishness", also the root of liberalism as an ideology,  and most of these examples remain relevant.


Example #1: "to let things slide for the sake of peace and friendship when a person has clearly gone wrong, and refrain from principled argument because he is an old acquaintance, a fellow townsman, a schoolmate, a close friend […]  Or to touch on a matter lightly instead of going into it thoroughly, so as to keep on good terms.  The result is that both the organization and the individual are harmed."

Like I said above, since I err more on the side of the second general category of liberal behaviour, this example is one of which I am most often guilty.  Although I have cut numerous friends out of my life because of political disagreements, I have often done so in an unprincipled manner.  Yes, there are a few who I have and will argue with, but there are others who, whenever I see them, act as if their politics do not exist.

Even worse, I have friends in the general and wider left who have taken unprincipled political positions, who continue to maintain these positions and pretend they are correct and everyone else is wrong (when history and reality says otherwise), and I avoid, or at least try to quickly end, political disputes that would harm our friendship.  Thing is, I don't want to be that person; I don't want to come across as self-righteous, even if I'm right.  And though this a problem that only truly becomes politically significant within a single organization, it still causes problems because…


Example #2: "to indulge in irresponsible criticism in private instead of actively putting forward one's suggestions to the organization.  To say nothing to people to their faces but to gossip behind their backs, or to say nothing at a meeting but to gossip afterwards.  To show no regard at all for the principles of collective life but to follow one's own inclination."

So instead of openly discussing the political problem, and confronting each other in a collective organizational environment where there can be some sort of reconciliation, some of us would prefer to gossip.  There is no possible way that this example applies only to some antiquated political reality that was lost in the chaos of the Great Proletarian Cultural Revolution.  Nor, I would maintain, is it possible for any self-professed communist to argue that gossiping is not petty, damaging, and against those "principles of collective life" that we would like to see manifest in reality.

The trade union where I spent the majority of my organizational time in the past five years, and which I'm trying to remove myself from now, is a notorious gossip machine.  Since, like every union, it is filled with reformists and reactionaries who just happen to be your fellow unionists because they work at the same job, and since you're stuck in General Membership Meetings with people who you would hate in everyday life, you often waste time and energy trashing them in private rather than confronting them within the organizational boundaries.

Or if you do attack them to their face, you only attack the outright reactionaries––like the ones who support Israel, or argue that the employer is their friend, or try to argue that they should be allowed to make over $80,000 at the expense of those of us with lower seniority who have to fight to even get a small fraction of that salary––who it's alright to attack privately because they're the sort of people who wouldn't be in the organization Mao was talking about because, really, they're your class enemy (uh oh, I'm breaking from the kind of class essentialism that trade union economism keeps trying to push!) and in the end gossiping about them is just as damaging as gossiping about other bourgeois and petty-bourgeois assholes.  You don't publicly confront the ones who are supposedly in your political camp but take extremely unprincipled positions, sometimes occasionally and sometimes for a long time, and instead waste your time gossiping about these positions rather than bringing them up in organizational spaces.

The mainstream left in my city is a sewer of gossip and, yes, I am one of those who has sadly participated in this sewer.  I mitigate this by telling myself that most of these people have politics wildly different from mine, regardless of our supposed shared "leftism", and by the understanding that I'm not in organizations with them.  I'm not sure, however, if this is the correct attitude.


Example #3: "to let things drift if they do not affect one personally; to say as little as possible while knowing perfectly well what is wrong, to be worldly wise and play safe and seek only to avoid blame."

More of the second category type.  Really, this defines the perfect liberal: it's like you're the balance "between right and right", refusing to speak up even though you know you should, and being friendly and "common sensical" about the whole thing.  Why can't we all just get along?  The answer, of course, is that we can't: class politics, which is reflected in every organizational space, is necessarily divisive.

I don't know if I'm *that* guilty of this kind of liberalism these days, even if it would normally be the kind that my social-inborn liberal cowardice would otherwise cause me to cling to desperately.  Although I have tried to avoid blame, ignoring conflicts in order to just play it safe, in the past several years I have become better in addressing this nascent liberalism.  Outside of leftwing spaces, though, I would argue that this type of behaviour is difficult for everyone because of bourgeois politeness.


Example #4:  "not to obey orders but to give pride of place to one's own opinions.  To demand special consideration from the organization but to reject its discipline."

Now we're on to the liberalisms of the first general category mentioned above and I'm sure everyone reading this is either angry because they don't want to accept that they're guilty of this (which means you are), or is nodding their head because they know at least half-a-dozen people they can name off-hand who fit the qualifications of liberalism #4.

Actually, this pretty much summarizes every popular activist in the Canadian and USAmerican mainstream left these days.  The poster boys (because it is most often boys, though there are some women) who think everything they say is gold, that everyone should listen to them, and (most often, but not always, being anarchists) have nothing but disdain for collective "orders" and collective discipline.  Structures of decision-making are deemed oppressive, collective discipline is mostly authoritarian, and if they're not at the centre of the demo-of-the-week then they will goddamn make themselves be at that centre.

Indeed, I was recently at a meeting with yet another Type 4 Liberal.  The left in this city cranks them out when the last one's popularity expires––they have a shelf-life of four to six years on average.  Utterly incapable of self-criticism, believing that they are the centre of a revolution that only exists in their minds (because if there is a revolution being built, it is not by these people who are destined for a petty-bourgeois existence and whose activism is as far from revolution as a libertarian is from elementary logic), they become the centre of meetings.  Self-appointed experts who think they're original, true individuals, even though they're only one more link in a long and disappointing chain of arrogant activists who never became revolutionaries.

Well, I'm certainly glad that I never became this type of liberal.  Although, I won't lie, I certainly dreamed of becoming the star activist.  But who hasn't, and what communist doesn't dream of leading the glorious masses to the gates of revolution?  And yet these dreams are liberal dreams, selfish desires to be great heroes and the centre of attention… Which is why, when the intersection of chance and privilege allow some of us to be in temporary positions of leftist stardom, and since we are programmed by liberal ideology, we can easily slip into this type of liberal behaviour.


Example #5: "to indulge in personal attacks, pick quarrels, vent personal spite or seek revenge instead of entering into an argument and struggling against incorrect views for the sake of unity or progress or getting the work done properly."

Really, this is the average internet leftist.  Like almost everyone on the left-wing subreddits who don't know how to argue and instead just attack with idiot platitudes and poor logic.  Or facebook left-wing authorities who can't make principled arguments and often resort to ad hominem slanders.

Here's something to consider, and something I've been working hard to grasp in the past year and a half.  For communists, for those of us who are interested in revolution, there is only one reason to argue with other communists: for the sake of unity and revolutionary progress.  Arguing simply for the sake of arguing, or simply to win an argument, and thus doing so in a way that is extremely unprincipled (degenerating into personal attacks, quarrels, etc.), is utterly self-obsessed, petty, and individualistic.  When we argue it should be about a political line, and when we fight for the correctness of this line it should be either to convince others of its correctness or to shake the tree of the mainstream left and see where the fruit falls.

When arguments are divisive, because they often have to be, then lines of demarcation are drawn; further argument should be designed, if it is at all possible, to bring people across these lines for the aim of revolutionary solidarity.  Moreover, we should be entering these arguments with an understanding that we can also be taught, that we can be proved wrong, and that we are the ones who need to be won over.  Otherwise, debates that are simply performed for the sake of clinging to one's own opinions and defending them with spite and personal attacks are liberal, far from communism, and generally what would actually qualify as sectarian.

[I will finish with examples 6 - 11 in a future post.  This time I promise I actually will finish.]