The Analysis of Egypt Repeats Itself

July 07, 2013
After all the hoopla declaring the "Arab Spring" of 2011 a "revolution" predictably receded, as I once argued it would, the events surrounding the recent military coup in Egypt have once again made Egypt the focus of the same socialist groups who see every mass movement as automatically revolutionary.  And though anyone who dares to call themselves a socialist, let alone a communist, must agree that it is right for the masses to rebel, we must also demarcate our support for spontaneous uprisings from our definition of revolutionary movements––without a party capable of organizing these explosions of mass rebellion into a coherent formation unified by revolutionary theory and practice, all we can do is rebel rather than make revolution.  Unfortunately, since the tendency to see every rebellion as a revolution is a common mindset amongst the dormant mainstream left at the centres of capitalism, and we get excited by massive demonstrations in other countries, the 2011 situation in Egypt produced a rather strange set of claims on the part of observers in North America and Europe, all of which were proved wrong by Morsi regime. 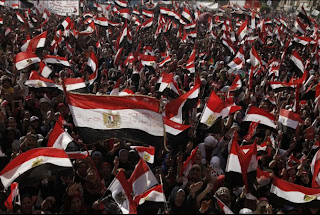 Interestingly enough, one of the claims made about the uprisings in 2011 that I critiqued in the aforelinked articles is now becoming the basis of another and similar claim––made by the same people who were wrong before but refused to really address the fact that they were wrong (though this did not prevent them from attacking me in the comments sections of the posts in question)––regarding the role of the military.  Once again, more than one leftist organization is claiming that the recent round of uprisings in Egypt is revolutionary and that the army is playing an adjunct role to this revolution.  After all, the army has executed the masses' will to oust Morsi and this fact, we are told, means that the current situation in Egypt is not a coup!  Historical amnesia is always saddening, especially when we are supposed to forget the role the Egyptian military played, two years ago, in producing the Morsi regime.  For in 2011 the military also sided with the masses against Mubarak––the military knows which way the winds are blowing, whether or not it should trust the political regime that will command its gun.  It turned against Mubarak because his regime could not maintain political hegemony; it turned against Morsi's regime for the same reason.

The point being: the military is not an essentially progressive force––it just understands, as all militaries should, the fact that the masses need to consent to a regime rather than always be coerced (for what military wants to always play the role of internal coercion when it makes more sense for people to consent to their own subordination?), and hence the Egyptian military understands how class power is implemented.  And so it should.

But in order to make the military's presence adhere to the same discourse of revolution that was proved wrong in 2011, some marxist groups and individuals are arguing themselves into a corner regarding the semantics of military coup.  Some of these groups have even gone so far as to proclaim that the current situation in Egypt is not a coup, per se, but part of a revolutionary process since the military has sided with the masses.  So what?  Simply because the military has chosen to come out on the side of the masses, ousting Morsi in order to placate the majority of Egyptians, still falls well within the definition of a coup.  After all, coups have not always been expressly reactionary: the Qadafi military coup was at one time progressive; the military coup in Portugal was anti-colonial; the 2002 coup in Venezuela returned Chavez to power.  Sometimes coups result in left populist governments, or at the very least tail some progressive mass demands, but they are still coups––pretending otherwise is simply wishful thinking.

Without a people's army the people have nothing… The Egyptian military is not the people's army: it is a professional military that did not emerge in a revolutionary movement but has been the back-bone of various non-revolutionary regimes.  Simply because it has chosen to side with the masses in two significant moments does not make it an expression of the masses' revolutionary will––anyone would be hard-pressed to claim that it was a communist institution, that it is even marginally interested in implementing socialism.  Once we move beyond sophistic games with semantics, where we pretend that coups are not coups because they sometimes accord with what people want, the fact that the Egyptian military is not a people's army should be clear: did a revolutionary organization build this military from a mass movement or did it develop into a professional structure with its own internal rules of governance based on successive anti-people regimes?  The question is rhetorical; it should be clear that the Egyptian military has interests that do not parallel the most radical interests of those involved in the recent rounds of uprising.  If it has chosen to come out against the Morsi regime this is simply a case of a military realizing that it cannot function as a military in a context where it must always be forced to turn against the population.  Once again: it recognizes the value of consent, of political hegemony, over the occasional necessity of coercion.

The party should command the gun… There is no revolutionary party that has itself attained political hegemony that is capable of commanding the army.  There is nothing but an army, the metaphorical gun, making the decision on behalf of the masses––and unless we are to believe that the Egyptian military is a revolutionary party then we must recognize the fact that this is indeed a coup on the part of an institution that has no revolutionary responsibilities.  If it chooses to come out against the Morsi regime––a regime it once propelled into power––it is simply because it is canny enough to understand the way in which the political winds are blowing.  The Egyptian military is not commanded by any revolutionary centre; it is choosing to exercise political command.  It expresses the will of the people inasmuch as it tails the people but has not emerged from the people––it is not a people's army, it is not commanded by a revolutionary party, and it has its own internal ideology that provides it with a political coherency.

While it is true that a military coup might sometimes side with the will of the people (this is an historical fact), such a sometimes does not mean that the coup is not a coup or that it is by itself revolutionary.  All revolutionary movements must produce their own military movements and command these military movements; without smashing the military that existed prior to their emergence as a revolutionary forces, as well as all structures in which the power of the enemy class accrues, they cannot succeed in carrying out their revolution.  After all, Allende rose to power without smashing those institutions within which the power of the enemy class resided––it was these institutions, some of which seemed to back his regime, that would also contribute to the destruction of his regime.  Hence, a military that occasionally sides with the people but that does not emerge from a mass revolutionary movement is one that must be treated with suspicion––history has already taught us this lesson.

Oddly enough, some of the same people that are trumpeting the fall of Morsi's regime are also those who, two years ago, argued that the existence of the same regime was a revolutionary expression of the masses.  The fact that they have ret-conned their analysis, without any critique of their mistakes, is telling, especially when they continue to imagine that a military divorced from the masses amounts to revolutionary salvation.  And so we must repeat: without a people's army the people have nothing and that we hope these rebellions will produce their own revolutionary organization with its own military.