July 22, 2013
The dogmatic assumption that the Bolsheviks simply seized power in 1917 due to one magical moment of insurrection has caused serious problems for the theory of revolutionary strategy.  Here, then, is a simplistic formula resulting from this dogma: a party just needs to be a tiny organization that agitates for revolution, waits for the time to be "right", and then conveniently appears to take the reigns of the popular uprising it agitated for––a cabal of militants accepted by the masses who have finally learned the truth.

If I am oversimplifying the insurrection discourse surrounding the October Revolution, I am only doing so because this is, in fact, the most common interpretation of the events surrounding the Russian Revolution.  So common, in fact, that bourgeois ideologues maintain that this was what happened: there was a popular movement, we are told, that the Bolsheviks helped grow and that they opportunistically seized when the time was right… Because, hey, Lenin's party wasn't really a "majority" but was only able to call itself thus due to a procedural mistake that allowed it to appear as the majority and thus claim the name "bolshevik": all of the bourgeois myths of secretive communist cabals that have no roots in mass movements are confirmed by this discourse. 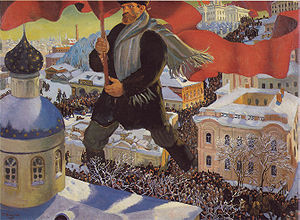 It is this mythology of the October Revolution that permits lack-lustre practice.  By believing that a party does not have to be anything but an agitational network that becomes militant only when the time is right––when there is a popular uprising that a small group of conspirators can seize––innumerable marxist organizations have done nothing but deform into propagandistic sects.  Here I am reminded of the member of one marxist missionary organization who informed me that his organization was preserving a "pure" marxism that the masses would recognize only in the moment of insurrection: they would be there to assume command when the moment came, they would be recognized as the proper commanders by an imaginary mass movement that suddenly became "properly marxist" overnight.

This mythology, however, does not just affect the dogmato-revisionist sects; it is codified in the practice of innumerable marxist organizations, especially those organizations that function at the centres of capitalism.  The 1917 mythology permits marxists to be militant in theory but respectable in practice: if they do not have to cultivate militancy in their actions, if they do not have to worry about organizing a people's army and figuring out how to build a militant organization in deed rather than words, then they can pursue social democracy, either explicitly or implicitly, and content themselves with the fantasy that their radicalism will be justified when the insurrection finally comes.

This discourse also justifies opportunism since it allows the opportunist to clothe themselves in the costume of radicalism and denounce all forms of militancy as ultra-left.  Economism masking itself as revolutionary becomes normative; the fiction is that unions are the bastion of the proletariat and that by focusing on union struggles one brings the insurrection one step closer by betting on the possibility of a general strike.  Sometimes this economism manifests in the most despicable forms as the struggles of police, prison guards, soldiers, and other pig defenders of the state––what Lenin called "the special armed bodies of men [and women]" necessary for capitalism––are treated as revolutionary.  (Indeed, the fact that more than one "marxist" group supported the prison guard strike in Alberta in May, and later showed no interest in the prisoner strike in California in June, demonstrates the level of opportunism that is now being disguised by this simplistic understanding of the October Revolution.)  This is because unions are still treated by some, without qualification, as the primary sites of proletarian radicalism that only need to be brought together, organized through agitation, and prepared for the insurrection that only they can bring into being through a general strike.

But those of us who believe that the common discourse of 1917 needs to be questioned are also those who argue that there is a revolutionary process leading up to 1917 in which the communist party under Lenin was extremely active.  This should not be seen as a new insight because communist theorists pre-1917 were quite aware of this process: as I pointed out in an old post, Karl Liebknecht (along with others) was extolling the guerrilla activities of 1905 and treating them as significant––1917 was not unprecedented, neither was the Bolshevik party simply a tiny cabal of conspirators doing little more but waiting to "strike when the iron was hot".  Again, this is the bourgeois interpretation of events: the capitalists want to pretend that any challenge to their rule is a minoritarian challenge; they invent stories of communist conspiracies and pretend that Lenin's party was an opportunistic flook; to act as if the insurrection of 1917 was the only moment that mattered for the Russian Revolution is to act as if a revolutionary party needs to be nothing more than a propaganda machine captained by a small group of dedicated militants.

Thus we need to grasp the fact that the revolutionary explosion of 1917 did not emerge from an organizational void.  The Bolsheviks were active as a party long before 1917, and not simply as an organization that only produced propaganda.  Indeed, in 1907 revolutionaries outside of Russia celebrated, in the words of the aforementioned Liebknecht, the "urban guerilla method, splendidly developed in Moscow"––meaning that the Bolsheviks were not simply waiting for the magical moment of 1917 but actively bringing this moment into being.  Point being: we are not supposed to wait for insurrection, we are required to produce a revolutionary process in which insurrection might play a part.  The party, then, does not wait to step into a mass uprising that is produced spontaneously but either produces this uprising or uses such an uprising to grow.  Only the former instance is represented by the common mythology of the October Revolution; unfortunately, those who historically misrepresent the 1917 insurrection like to pretend that it also represents the latter instance––that the uprising happens spontaneously and the party, in the very act of growing itself through this moment, also produces revolution!

(Hence all of the bizarre claims regarding the "revolution" in Egypt, first in 2011 and now again in 2013: the erroneous analysis of the former is repeated in the analysis of the latter with a historical amnesia that is typical of a first world left unwilling to think through revolutionary strategy.  Just apply some simplistic notion of what you think happened in Russia––that is, what has been codified by a history of unremarkable strategic theory––and use this application to justify your own refusal to think through the problems of actually making revolution.)

The simplistic comparisons to Russia in 1917 that conveniently forget that 1917 was part of a larger process avoid the demand of thinking through revolutionary strategy.  For it is indeed easy to adopt a cookie-cutter solution to revolutionary strategy and just apply the simplest understanding of the "October Road" in order to justify inaction: rebellion will come and prove itself justified by an insurrection that, in the moment of insurrection, will allow one potential vanguard to become the vanguard.  No point, then, in trying to do anything other than distinguish oneself in the sphere of propaganda.  No point in thinking of a revolutionary military strategy until the time is right, which it will be when there is a proper uprising.  As T. Derbent argued in Categories of Revolutionary Military Policy, recently translated and released as a pamphlet by Kersplebedeb: