July 27, 2013
Over a week ago, a good comrade and friend emailed me a copy of the recent Communist Party of India (Marxist-Leninist) Naxalbari [CPI(M-L)Naxalbari] journal.  And though I am still partially confused as to why the CPI(M-L)Naxalbari is still a separate organization from the larger CPI(Maoist) that is actually engaged in people's war (especially since they support the people's war), I was rather impressed by this issue of their journal.  Specifically, I found the critique of the RCP-USA, Against Avakianism, both impressive and important. 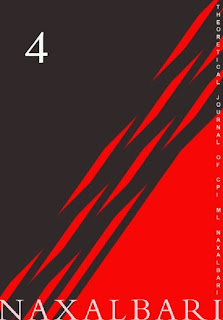 As some of my readers might be aware, the CPI(M-L)Naxalbari is one of the former members of the Revolutionary Internationalist Movement [RIM] that is not only involved in efforts to rebuild this organization, but has been interested in ideological struggle with former members of the RIM that have walked away from this project.  Excluding the "Prachanda-Bhattarai"revisionism of the maoists in Nepal, or the earlier disintegration of the maoists in Peru, one of the significant problems with the rebuilding of RIM has been the Revolutionary Communist Party, USA [RCP-USA] that, at least according to most former RIM members.  And though the RCP-USA is nowhere near as significant as the Communist Party of Nepal (Maoist) [CPN(Maoist, UCPN(Maoist)] or the Communist Party of Peru [PCP, also known as the "Shining Path"] when it comes to concrete praxis, they have been the loudest party theoretically, mainly due to the fact that they possess the privilege of being a US organization––the privileged chauvinism of US organizations, and their self-obsessed exceptionalism, is indeed a problem.

(Apologies to those readers who cannot stand the acronym "alphabet soup" of international communist organizations.  Although I have become familiar with many of these acronyms, and am forced to use them because they are necessary to indicate actual organizations, I understand that they are both confusing and messy.  Hopefully a day will come when every revisionist organization is destroyed and each country can only have one communist organization with a simple acronym… Unfortunately, we haven't yet reached this day.)

Thus, although the RCP-USA appears to have degenerated into a tiny cultish organization that is nowhere near as large or significant as it was in the 1970s, it still has a legacy of making theoretical waves within the international communism movement.  And though it may be correct to argue that its international influence is due to its imperialist privilege, we are still forced to recognize that this influence does indeed exist and thus must deal with influence, whether we like it or not.

In any case, the RCP-USA, which has now completely devolved into a cult devoted to Bob Avakian, still relies on some of the international prestige it has garnered through its involvement in internationalist circles, regardless of its behaviour in these circles.  Even though so many of us have been skeptical of the RCP-USA's cultishness for years––for a long time the cult of Bob Avakian was indeed a joke, a slander, a dismissal––we would have to be completely remiss to deny that the RCP-USA did not have some influence on the international communist movement.

Hence the importance of this article by the CPI(Marxist-Leninist)Naxalbari regarding "Avakianism"… It not only attacks the theoretical direction taken by the RCP-USA but argues that the supposed influence of this organization was not as significant as both the RCP-USA and its main detractors would like to imagine.  Here we find a long-standing member of the RIM arguing that the RCP-USA, despite the privileged chauvinism it exhibited in order to hamper the RIM, was not a significant theoretical contributor to the RIM and the theory of Marxism-Leninism-Maoism that emerged in the RIM.  According to this document, the RCP-USA, despite their mythology of being in a "leading role", was often dragged by other revolutionary organizations, kicking and screaming, to accept many of the RIM positions.  And if it contributed to the dissolution of the RIM, this may have been because it couldn't get its way.

For example, according to this document by the CPI(M-L)Naxalbari, the RCP-USA resisted the adoption of Marxism-Leninism-Maoism and appears to have been pressured into accepting Maoism as a third stage of revolutionary science.  If this is the case, and the document does a good job of arguing that it is the case, then the so-called "new synthesis" makes logical sense: interested only in endorsing MLM in name, perhaps it was always planning to dismiss this ideology when it gained the upper-hand in the RIM.

Hopefully, and once the Communist (Maoist) Party of Afghanistan finishes its own response to the RCP-USA, the international maoist movement can stop talking about the RCP-USA and its "new synthesis" and relegate this organization to the dustbin of history.  Indeed, the Naxalbari document is such a thorough and comprehensive rejection of the RCP-USA that, regardless of any rhetorical response from the Avakianites, it should be seen as hammering one of the final nails in the coffin of this American organization that is no longer a significant international organization, if it ever was.  So maybe we can stop talking about the RCP-USA's "new synthesis" as something that needs to be confronted, realize it has been thoroughly denounced as revisionist, and get on with building Maoist organizations.