On Protracted Peoples War as a Universal Development of Revolutionary Theory

February 17, 2012
Around a week ago I informed two internet comrades that I wasn't going to write on the theory of Protracted Peoples War (PPW) as a universal development of revolutionary communist theory anytime soon.  The reason I gave for abstaining was, like so many others who have been either intrigued or convinced by the Canadian Revolutionary Communist Party (PCR-RCP) articles (here and here) that have asserted that PPW is the proletarian strategy of revolution even at the centres of world capitalism, I am also waiting for the larger theoretical offering before extrapolating, without requisite theoretical/historical/practical investigation, a larger meaning of the theory from the conceptual germ so far available.

And though I still do not plan to theorize anything more than what has already been presented in the articles cited above, I have recently changed my mind about blogging generally on this issue for two reasons: 1) my recent review of Liebknecht's Militarism (1907) ended up raising the issue of PPW; 2) asinine and uninformed rejections of PPW in my social context continue to be prevalent despite the failure on the part of those promoting these rejections to understand what is meant by protracted peoples war. 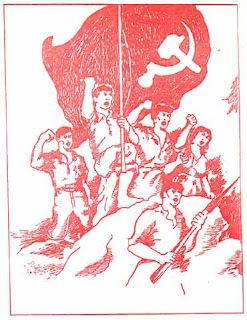 In my entry on Liebknecht I pointed out how the author's analysis of militarism, and the fact that he places weight on the events of 1905 in Russia (in his words, a "guerrilla" war) as world historical, should lead us to think about the importance of the revolutionary [protracted] process from 1905-1917 rather than focusing solely on October 1917.  So I want to emphasize the fact that Liebknecht seemed to understand that the proletariat needed a strategy of revolution to respond to the crushing weight of capitalist militarism––and that "the superiority of the army to the unarmed people, the proletariat" is a "vital question"––which prefaces the theory of the PPW.  In the historical examples Liebknecht cites regarding clashes between the militarized bourgeois state and the insurrectionary workers (many of whom had even managed to arm themselves), he claims that in all cases the military power of the state was decisive.

So the "vital question" that Liebknecht raises but fails to answer is: when faced with capitalism militarism (a professional and fully-funded standing army that persists in a pro-militarist ideological context), how does the proletariat prepare itself?  "One ought to be prepared for everything," he writes, and indeed the theoretical strategy of insurrection––banking everything on the insurrectionary moment following a protracted legal struggle––is not preparing for everything; it is only preparing for one moment.  Liebknecht also seems to hint, at least in his discussion of Switzerland in 1899 (that he returns to on more than one occasion), that what the proletarian needs is a peoples army––he even uses this term.  Still, these are just glimmers of a strategy that would not be theorized, despite being practiced without clear theoretical reflection from 1905-1917 in Russia, until Mao's theoretical conceptualization of PPW.

Which brings me to my second reason for this post: the inability of critics in my social context to understand or even bother to understand, what is meant by protracted peoples war.  The most ludicrous dismissals are the claims that PPW is about forming peasant armies and surrounding the cities from the countryside amidst some sort of agrarian revolution… and since all talk of a powerful "peasant class" in this context is obviously non-sensical, then if this is what we believe we can be dismissed as delusional.  Except this is not what we mean.

Then there are the equally wrong-headed charges that those of us who endorse PPW as a universal development of revolutionary theory are "adventurists" who want to start urban guerrilla squads tomorrow and begin shooting it out with the pigs.  We are suddenly accused of being theoretically in line with the Red Army Faction or the Red Brigades.  And though we uphold the legacy of these failed focoist attempts (just as we uphold every legacy of failed revolutionary attempts) this is also not what we mean.

What we do mean by PPW is the answer to the "vital question" raised by Liebknecht (and others, of course, before and after Liebknecht).  The theory of Protracted Peoples War is juxtaposed with the theory of Insurrection that takes the moment of the 1917 October Revolution in Russia as more significant than the process from 1905-1917.  As was argued in the articles cited above, all attempts to follow the October Road––attempts that failed to grasp the moment of insurrection as only part of a much larger process of PPW––have actually failed.  Every attempted insurrection based on the strategy of Insurrection has been crushed despite all arguments that this strategy is the only viable revolutionary method at the centres of capitalism.  There is no historical precedent aside from the October Revolution which, as I have already argued, was actually a protracted process.

Those who argue that PPW does not apply to the centres of capitalism claim that the moment of insurrection must come after a protracted legal struggle.  Work in reformist ways only, embed yourself in unions, engage in propaganda to win the hearts and minds of the people… But do not try to figure out how to connect any of this to the formation of a unified peoples army because this is somehow "adventurism".  And though we are not arguing that we are in a stage anywhere close to guerrilla warfare, apparently because we believe it is silly to assume that an untrained mass of workers are just going to have an insurrection one day and the state will not bring about the full crushing might of militarism to stamp it out we are raving revolutionary crazies.  But the state has stamped out every attempted rebellion generated by the strategy of Insurrection.

If anything there is another type of "adventurism" in assuming that we're going to have a grand insurrectionary adventure one day and we'll arm ourselves like heroic boys in the most vapid pulp fantasies to slay the dragon of capitalism without any preparation beyond legal struggle.  Why?  Because, like in every boys-own fantasy, we are destined to succeed.  No: those of use who believe in PPW argue that a longer and more sober strategic view is required.

Take, for example, the failed Spartacist insurrection in which Liebknecht, over ten years after writing Militarism, participated. [A side point: I still find it rather offensive that a certain marxist cult names itself after an uprising that had nothing to do with its dogmato-revisionist ideology––an uprising whose main theorist would probably have nothing but insulting things to say about this organization that appropriated its name.]  True, this insurrection was "premature" but we need to ask ourselves how it would have been made mature?  Simply by banking on "the objective conditions" being utterly perfect so that the strategy becomes more of an act of fortune-telling––reading the "economic" signs, the political augurs––or by working to train "the subjective conditions" long in advance?  And the insurrectionaries in 1919 Berlin lost everything at this moment, the last gasp of revolution before the onslaught of fascism, and since they were not a peoples army involved in a strategic process of PPW they were unable to dissipate and reassemble.  In one go the insurrection was lost, and Spartacist warfare did not continue.  Again, one of this is to say I disparage the Spartacist Rebellion: I honour its memory just as I honour the memory of every revolution.  My only point is that, like the "adventurism" of the RAF, the Insurrectionary strategy of the Spartacist rebels didn't work.

I won't explain the meaning of PPW in further detail because it is better explained, in a different manner, by the previously cited PCR-RCP articles.  (It is also explained, in a different manner by theoretical articles produced by the New Italian Communist Party [nPCI], but it is important to note that the nPCI's conception of PPW may indeed be "adventurist", at least applied to contexts outside of Italy, because it assumes we are already at an advanced stage of "strategic defensive".)  What I am concerned with now, however, is the psychology of rejection aimed at theories of PPW.  That is, why is there a knee-jerk response to the theory of Protracted Peoples War that begins with unfounded dismissal?  Why, without investigation, is there this immediate need to speak?

It is important to note that one of the reasons behind the Elections Boycott Campaign, that I supported a year ago, was provided in the PCR-RCP Party Programme in the chapter on Protracted Peoples War.  That is, the boycott was partially justified by a need to break from the theory of a protracted legal struggle intrinsic to the strategy of Insurrection.  And the knee-jerk response to the Boycott Campaign from some sectors of the mainstream left should tell us something about the knee-jerk response to the theory of PPW.

In two words: default opportunism.  As I have argued at various points in this blog, we as the left are affected by a dominant ideology of opportunism that is very strong at the centres of capitalism.  This is not a new insight: Lenin already recognized this problem in 1915 and, if anything, it has only become worse.  We would rather stick to our in-crowds, preferring to believe that the masses "aren't ready" for communism, and when we take the public stage participate only in the most reformist movements (and within reformist limits) even if this means tailing or attempting to infiltrate a parliamentary party that hasn't even been "social democrat", let alone proletarian, for a very long time.

We are very comfortable with our protracted legal struggle, especially now that its protraction has no end in sight.  We can engage in ideological debates within our circles of conversion (which I am perhaps guilty of doing also), sing hosannahs to a distant insurrectionary moment, and imagine that we'll all spontaneously arm ourselves and achieve victory when the magical moment erupts.  Thus, any theory that asks us to consider whether our practice is not enough elicits wild and spurious rejection.

Even as I write this entry I know that it will be dismissed off-hand by perhaps would-be comrades who won't even bother to engage with or read the arguments.  I know this because I know that so many of us fail to grasp arguments that challenge our ideological commitments: I am as guilty of this (and will continue being guilty of this at different moments) as anyone else––when I first encountered the PCR-RCP's claims about PPW, I must confess, I reacted in a similar manner.  It wasn't until I read their the actual theorization, and engaged with the arguments, that I realized I had never really had an understanding of the meaning of Protracted Peoples War in the first place.

In the end, we should really be asking ourselves this question: if the most important thing for communists is revolution, then why is there such a poverty of actually theorizing how to achieve revolution amongst self-proclaimed communists of all types at the centres of capitalism?  Some of us believe that theorizing revolution in Canada has been opened by the aforementioned theorization of PPW, partially for the reasons cited above, and thus, even if it is rejected, it needs to be taken seriously.