As someone whose doctorate was earned through a study and application of historical materialism, and as someone who is currently working on a book about the meaning of marxist philosophy (that is, philosophy applied to the historical and dialectical materialist method[s]), I take the meaning of this theoretical terrain quite seriously.  Moreover, it is the method I use consistently, much to the consternation of those who would find it "totalizing", and I defended my use of this method way back at the dawn of this blog in a very messy and unedited [like most of what I write] article called The Science of History.  None of this is to say that PhD expertise in the philosophy of historical materialism makes me more qualified than anyone else to talk about it, but it does mean I've had the privilege and time to make sense of the conceptual meaning of the methodology.

(Clearly, revolutionary praxis produces the best historical materialist engagements, but since the article I originally critiqued had nothing really to do with revolutionary praxis [it conflated spontaneism with revolution, separated revolutionary movements from theory, and seemed to be nothing more than a theoretical mindset emerging from the #occupy movement], then it would seem that the author's understanding of hismat (not to mention diamat) is primarily the result of academic engagement.  So if we are going to play the "I've studied more than you card" [he threw out names of key Marxist texts, "reminded" me that Lenin's What Is To Be Done? was influenced by Kautsky], then I think I'm well within my writes to note my credentials.  After all: if this is going to be simply about theoretical credentials, I can also play that game.)

Moreover, in The 18th Brumaire of Louis Bonaparte Marx argued that humans make history in circumstances directly encountered by the past: hence the need to approach history scientifically, to understand what can possibly be made at a given conjuncture, the limits of the social and political horizon provided by the past: history only presents, Marx often quipped, those questions we are able to answer.  By positing that humans make history (while, dialectically, being made by history) Marx and Engels were able to theorize the momentum of historical change: revolution.  Or, in Marx's words, "revolutions are the locomotives of history."  So here we have the following formulation: historical materialism is the science of history, the motion of which is revolution.  To have a scientific understanding of modes of production is to understand that every mode of production has a key class character; to make sense of the passage of one mode of production to another is to recognize the motion caused by the class contradictions inherent to these historical moments. 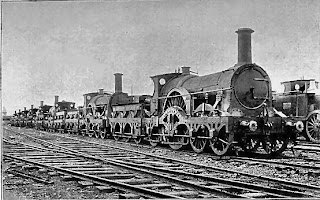 So if the motion of history is revolution, then theorizing revolution is extremely important for an historical materialist.  And though I know I'm brushing over all the debates between the forces and relations of production schools of thought, I think it's important to point out a few things: a) Marx intended Capital, his key historical materialist text, to be a theoretical weapon for the working class movement of his time; b) Marx and Engels' writings on the Paris Commune argued for the importance of a revolutionary theory to structure a revolutionary movement (here is where the concept of the dictatorship of the proletariat appears in germ form), and they were able to make this theory based on the failure of a past movement that also had a theory (but an erroneous and not properly historical materialist theory); c) the First International was an attempt to provide theoretical unity to a proletarian movement.

Historical materialism was considered scientific by Marx and Engels (in The German Ideology, in Anti-Duhring, in every text where they mentioned these two words) because it was not historical idealism.  That is, it was a materialist engagement with history: the motion of history being revolution, history being nothing more than what was made by historically and socially embedded humans, and above all (to repeat) a concrete understanding of concrete circumstances.  To produce an historical materialist analysis is to abstract universal principles out of particular circumstances, analogous to a scientist working in hir lab, and then reapply them to the concrete instance.  (Now it may very well be that you don't like the terminology of "science" here, but that's the terminology Marx and Engels used and their justification for historical materialism.)  A failure to provide a concrete understanding of a concrete circumstance means that one is an historical idealist.

Nor can we be taught by failures and successes if we refuse to recognize and understand those moments of history where revolutionary theory was developed through struggle and a simultaneous engagement with the past.  The point of historical materialism, at least the point made by Marx and Engels in their mature works, is to establish universal principles through particular engagements with the motion of history––and correct universal principles can never be established if one has no appreciation of the concrete meaning of this moment in a given space and time.

Now we come to the importance of dialectical materialism which is both parallel and intersecting with historical materialism.  A logic that is neither dialectical idealism or crude materialism, but that understands that ideas emerge from the material base and that, at the same time, can become a material force ("self-determining force" as it was phrased in The German Ideology).  But since this entry focuses on the moment of historical, rather than dialectical, materialism (which should not really be separated but often need to be separated for reasons of philosophical clarity), I want to conclude with the following discussion: in the response to my previous post, the author inverts Lenin's claim about revolutionary theory to read "without a revolutionary movement there can be no revolutionary theory." And yet this claim was forestalled by the law of the excluded middle, by the dialectical method that is supposed to be at the core of historical materialism itself, when I already argued that theory both produces revolution and is produced by revolution.

That is, without revolutionary movements there can be no revolutionary theory AND without revolutionary theory there can be no revolutionary movements.  I already attempted to walk the reader through this dialectical unity of opposites, but apparently it was unclear.  But let us be clear: Marx and Engels were the first to glean (especially in their analyses of the Paris Commune), through dialectical materialism, that there were theoretical points of unity of revolution––the self-determining force representing a specific class agenda is what defines the nature of a revolution; one cannot ignore world historical revolutions, and what these revolutions actually meant, and call this historical materialism.