October 28, 2010
Because I like to make myself angry and annoyed, I often waste time reading conservative sites and blogs (sometimes I go so far as to read libertarian/objectivist blogs!). I justify this waste of time as educating myself on the enemy. The nascent fascist movement south of the border is growing in influence; in some ways it is imperative for leftists to be aware of this danger. At the same time, however, a lot of the blogs I read are so ludicrous that I find myself close to banging my head on the computer screen, frustrated that people actually believe this crap.

The winner of this week's Rightwing Stupidity Award goes to the Virginia Anti-Shariah Task Force blog that is managed by James Lafferty. Yes, in Virginia there is a group of concerned U.S. patriots who possess an anti-Shariah task force! They are VAST!!! 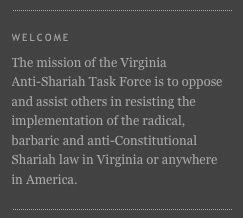 James Lafferty and his fellow VAST members, according to this mission statement, actually believe that there is an Islamic conspiracy to take over the legal system and institute Shariah law. This is as ludicrous as believing in the Jewish Banking Conspiracy, but racist absurdity doesn't stop VAST. Being vast, I suppose, VAST is above every absurdity.

In any case, Lafferty actually believes that there is a conspiracy to implement Islamic Shariah law in America and that it is the duty of every patriot to resist such implementation. He is not alone in these sentiments: that abhorrent anti-human Newt Gingrich has also promoted the Islamic Legal Conspiracy, so VAST is perhaps more vast than Virgina.

But seriously, a plot to replace the current American legal system with Shariah law? The only reason we have to take such delusional nonsense seriously is because the average Tea-Party member actually believes this crap.

The irony is that the people who fear some Islamic legal take-over really can't explain what they don't like about Shariah law. Nowhere on this website is there any substantial explanation of their object of hatred aside from the fact that it is "unconstitutional" and nebulously connected to "terrorism." In fact, I really cannot understand why right-wing American conservatives would have anything against the content of Shariah law.

Conservative family values, the proper place of men and women, the husband as head of the household - these are the hallmarks of any conservative system of law and these are the types of laws that conservative Islamophobes want to institute. These are the people who are anti-abortion and anti-queer. They rail against the burka but think that women should act in a proper way, subservient to Promise-Keeping Men. In a recent article discussing the Islamophobic attack on the Muslim comic/cartoon "The 99," Andy Khouri of Comics Alliance wrote:


"The reality is that Superman himself operates in a way that would be very agreeable by most mainstream interpretations of Sharia, and it is with pronounced irony that conservative Americans, particularly those in favor of living life like we're all Boy Scouts, react so hatefully towards [this type of Islam]."

So what is VAST, in all its vast wisdom, really complaining about? What would they really have to fear if their conspiracy theory delusions turned out, in some parallel version of reality, to be real? Not losing the family values they desire, that's for sure.

No, it's not the essence of Shariah law that VAST opposes. (Only leftists actually oppose Shariah law, and all conservative laws, for the proper reasons.) James Lafferty, friend of Glenn Beck, is probably more than happy to see his wife barefoot and pregnant, the way the U.S. God intended, and would be even more happy if the law defended, as it used to do all the time, his God-given American right to male authority.

What VAST truly opposes, along with every other anti-Shariah conservative organization in the U.S., is the non-Christian and non-white form of a conservative set of laws they would otherwise be quite happy to adopt. Make it a little more American, take out its "exotic" and "ethnic" overtones, whiten it up a little bit, and what do we have? Those good old family values the "liberals" are trying to take away from the holy conservatives. (Here is yet another strange contradiction: Obama is called a "liberal" on one hand, and a secret promoter of conservative [but conservative Muslim] laws on the other.)