October 21, 2010
The cliche about democracy being a possible "tyranny of the majority" was gibbered in my vicinity recently, reminding me again of how I hate this supposed nugget of "wisdom" almost as much as I despise the spurious appeals to human nature that are used to defend capitalism.

What is it about these pitiful aphorisms that makes them so popular? The cliche is taken as an argument in and of itself: "Golly it must be so because I have this cool quote I picked up somewhere that I can't remember."

This time the "tyranny of the majority" nonsense was uttered by someone who thought he was an authority on the matter simply because he had a doctorate. Of course, the fact that his doctorate concerned the philosophy of science apparently did not disqualify him from making truth statements about areas outside of his expertise. Nor did his vaunted love of formal logic prevent him from using a cliche as an argument.

Then there was J.S. Mill, the humanitarian liberal who thought that universal suffrage would lead to a tyranny of the crude and backward masses who would pass class legislation and thus steal the privileges of their betters. He thought that people in the ruling classes, and especially intellectuals, should have more than one vote to prevent this feared tyranny.

The point I am trying to make is that the liberal democracy of every so-called "democratic" society is not and has never been a "tyranny of the majority." Parliamentarian voting never threatens the rights of the few to oppress the majority. The ruling classes, the absurdly wealthy individuals, never have to worry about the mobs showing up at their mansion doorsteps and tyrannizing them by expropriating all their beloved property. Really, our democracy is just a bunch of ruling class parties who, to paraphrase Lenin, are arguing amongst themselves on how to best "misrepresent the people."

Aside from those cases where the "tyranny of the majority" is quoted by lifestyle anarchists (whose idiot love of rugged individualism is behind their pseudo-radicalism), usually the cliche implies that the privileged are mad that they aren't living in some golden age of individual privilege that never existed. 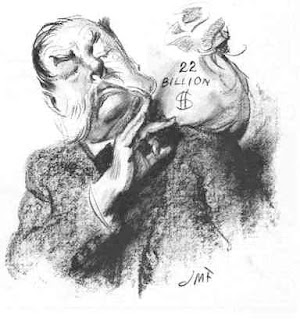 "Must the masses I work to death in my factories tyrannize me with their demand for more wages? How will I ever make more billions with their oppressive democratic sentiments?"


We should remember that Tocqueville coined the maxim in response to his ruling class fears of another French Revolution and the Terror leveled against the monarchy. Oh, those poor monarchists whose freedom was guillotined away by the tyrannizing masses. It is the nobility, after all, who possess the God-given right to be tyrants, not the people.

Personally I wish we lived in a society where the masses could "tyrannize" the wealthy minority who currently control their destinies. We communists who come from a Leninist tradition call this the dictatorship of the proletariat and, unlike the dictatorship of the bourgeoisie - where the class structure and ruling class constitution always enshrine a class tyranny of the minority - we don't pretend there is anything wrong with suppressing/tyrannizing/liquidating the terms of the ruling class(es).

Much of the fear still harboured towards great (though admittedly messy) moments of mass liberation like the Cultural Revolution express the horror the privileged experience whenever they think the masses they oppress are going to pursue radical equality. The problem, however, is that calling these moments of possible human liberation "tyranny" obscures the reality of tyranny. If the aim of the dictatorship of the proletariat is to remove class oppression altogether, how can it possess the same essence of tyranny that capitalist (even capitalist democratic) oppression must, by its very nature, pursue?

This is not to say that there are moments of mob reactionism where entire populations can be mobilized against their own interests, taught to scape-goat oppressed minorities, and become tyrannical. These instances, however, are not "tyrannies of the majorities" because these are always moments where large groups of people are manipulated by a wealthy minority to enshrine the privilege of this majority. Fascism is not the "tyranny of the majority" because it has always been about protecting the ruling class and its property and eradicating mass equality. The Tea Party movement in the U.S., for example, is the result of callous ruling class manipulation. In fact, the entire movement was funded and organized by the Koch family, one of the wealthiest billionaire families in the U.S.

If only the wealthy minority could be tyrannized by the masses they exploit in order to become wealthy. In hope of a real and progressive "tyranny of the majority", it is worth studying this list published by Forbes, defender of the wealthy rulers, to know who will be worth "tyrannizing" in the future: 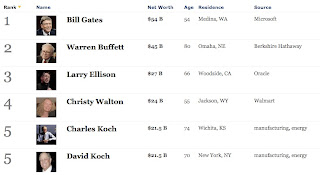 Ah, look at the smiling enemies of the people. Notice how the Tea Party Koches are at number five (they are also the 24th richest in the world). Surprisingly a woman has made it into slot four this year - she wouldn't even be at the bottom slot of this list four decades ago, and I'm sure her male counterparts are complaining that the tyranny of the majority is the reason women are on this list of 400. Indeed, women are a minority on the list which, by and large, consists of white men. (Except Oprah made slot 130, which probably explains her love of bourgeois ideologies like The Secret... Sorry fans of Oprah, she is not looking out for your best interests: she is part of the tyranny of the minority, a class enemy!)