June 07, 2019
With the Inquiry on Murdered and Missing Indigenous Women and Girls (MMIWG) having released its final report, a not so curious and all too predictable phenomenon has manifested in the general Canadian public. Despite the fact that the Inquiry used the term genocide, and connected the tragedy of MMIWG to colonialism, politicians, journalists, pundits, social networking personalities, the "average Canadian citizen", and even some self-proclaimed "leftists" are loudly proclaiming this tragedy is not genocidal and ignoring what it would mean to recognize its connection with colonialism. This was predictable because the same groups of people (and indeed some of the identical individuals) made similar proclamations when the Truth and Reconciliation Committee that investigated the Residential School system also used the word genocide and implicated Canadian settler-colonialism.

Although it is important, maybe even monumental, that the Inquiry the Liberals set in motion and funded is talking about colonial genocide, it is not surprising that the normative ideological response is to deny such a claim. The moment the core claims of the Inquiry's final report were made known, Canada's genocide denial machinery was started up again. Outside of the major newspaper's avoidance of the term (with the possible exception of the Star, though it didn't deny or not-deny to hedge its bets) this time, in the age of high traffic blogs and post-Medium internet news sites, we are even given a slough of ridiculous genocide-denial-but-woke articles, such as Anna Slatz's Using the word "genocide" cheapens the MMIWG tragedy. Except that Slatz is not really "woke" in any way shape or form: her output largely consists of giving faux-left cover for rightist free speech arguments, liberal defenses of Nazis, anti-trans but "feminist" screeds, and of course Quillette publishes some of her work. That Slatz imagines she is an expert on these issues, better informed than the actual experts that formed the Inquiry and spent years investigating and compiling their report, is typical of the self-proclaimed internet expert in this era. There is no way she could have read the entire 1000+ page report that she cherry-picks from in the 24 hour period between its release and the writing of her article, but that doesn't matter. All that matters is confidence, the pretense to care about the tragedy, and the desire to spin it away from colonial culpability. And this is pretty much what nearly everyone (excepting the die hard reactionaries who embrace colonial genocide) who has focused on the report's claim about genocide and colonialism only to deny the significance of genocide and colonialism has done: they cry crocodile tears about the tragedy and then focus on why this tragedy is not what the Inquiry says it is. 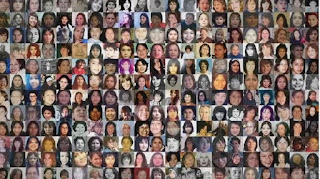 You've got to wonder about journalists who say they care about MMIWG and then make this issue about the fact that it is not genocide and that ongoing settler-colonialism doesn't matter. Here they are presented with a thorough and comprehensive report on something extremely horrendous, a reality that continues to affect the existence of Indigenous women and girls, and their knee-jerk reaction is to complain about the terminology. Actually you don't really have to wonder: it's clear they don't really care about this situation; if they did they wouldn't be spending all this time undermining the Inquiry, clutching their pearls, and trying to turn it into an apolitical tragedy like Chernobyl. Oh wait, thanks to the Chernobyl TV series that disaster has been given more political weight than MMIWG amongst the same people denying genocide. A better analogy would be the flash fire of Notre Dame Cathedral… wait, even that event was a tragedy that was given more significance than the lives of colonized women because it was European History. Notably, Slatz seemed to think was more tragic than MMIWG since she was more concerned with twitter reactions that made light of it more than she was concerned with twitter reactions about how she made light of the slaughter and disappearance of Indigenous women and girls. So maybe the only thing these people see as tragically analogous to the lives of colonized women and girls are lives snuffed out by random lightning strikes, or planes that crash because of bad weather. No structural meaning, no historical depth, no culpability.

As the PCR-RCP's recent statement regarding the MMIWG Inquiry's final report and its reception asserted in response to what it saw as colonial "hand-wringing":

Hence it is appropriate to call the fact of MMIW genocide because it is part of a genocidal process that stretches back to the early days of colonialism. Those committed to the Canadian settler-state do not like to admit this fact. The more “enlightened” of these genocide deniers might admit that genocide happened in the past (but only if they have to admit this truth) but that this past, lamentable as it was, is something Canada has grown beyond––nothing counts as genocide anymore if it could even be counted as such in the first place! What they cannot accept, because it will undermine their assumption that Canada is fundamentally progressive and tolerant (especially compared to its neighbours to the South!), is that the spectacular genocide of the past is ongoing, has been institutionalized, and now persists in a sustained and creeping manner. Sometimes through institutions, sometimes through the settlerist ideology that is terribly common, sometimes through seemingly criminal and lumpen processes.

I reference this statement at length here because I'm in agreement with its analysis and feel no need to replicate it in this post.

Rather I want to conclude by thinking on what was conjured across multiple social networks and mainstream colonial consciousness following the release of the Inquiry's final report and the apprehension of its summary details. Aside from the genocide denial amongst liberals and pseudo-leftists, an entire plethora of Marxists and anarchists who live in settler-colonial social formations were suddenly offended by the prospect of Indigenous national self-determination. There were complaints that such self-determination was equivalent to white supremacist "ethno-states". When I tweeted about how anyone who believes in this equivalency should be reeducated one "anarchist" account took issue with my supposed authoritarian "wet dream"––because it's apparently worse to talk about reeducation colonial chauvinists than being a colonial chauvinist in the first place. Just as more attention is being given to the supposed "appropriateness" of the term genocide when it comes to MMIWG than the tragedy of MMIWG, more attention is being given to angry denunciations of colonial chauvinism than the problem of colonial chauvinism.

It is noteworthy that the event of the Inquiry on MMIWG has produced a discussion on the meaning of violence against Indigenous people (in this specific case women and girls), but it is interesting and significant that such a discussion has necessarily forced the discussion of its logical basis––settler-colonialism––and that the denial is echoed from one register to the other. The sudden revelation that a bunch of self-proclaimed "leftists" who live in settler-colonial nations are uncomfortable with the prospect of decolonization, but are only broadcasting these concerns in the shadow of the debate about the MMIWG Inquiry's use of the word genocide, demonstrates that this Inquiry is useful even if the government that funded it will ultimately seek to relegate it to historical obscurity. It reveals one of the primary dividing lines for revolutionary struggle in social contexts such as Canada or the US: the colonizer-colonized contradiction of settler-colonialism. And those whose understanding of "what is to be done" falls on the side of the colonizer logic, no matter how much they praise the proletarian or despise the State, are the enemy.

As an aside, it is also worth noting how many online leftists who locate themselves within the ranks of the revisionist Communist Party Canada (CPC) have defended the Inquiry's claims. Considering that the CPC is not at all interested in decolonization, that it imagines the losing colonial power that became Quebec has more right to independent nationhood than the colonized nations, it is worth wondering whether these CPC supporters who seem to publicly care about Indigenous self-determination are even aware of the programme of the party they claim to support. If they aren't, and care about Indigenous self-determination, then they should exit the CPC immediately; if they are aware of the CPC's programme and still publicly maintain the semblance of pro-Indigenous politics then they should admit that they are liars. Communist parties that cannot break from colonial chauvinism belong on the historical dustbin. And any CPC member who cares about what the MMIWG Inquiry implies should either break from this revisionist-colonial ideology or relegate themselves to the same dustbin.