December 22, 2016
Since I'm leaving for holidays in a couple days, and will be away from my main computer until the new year, I figure I should put the next instalment of my free speech manuscript up before most of you lose interest. The other chapters require much more editing, and will probably take me some time to get to (I really hate editing because it's boring), but this one was less messy.

In this first chapter, entitled "The Modern Discourse of Free Speech", I examine the vicissitudes of the contemporary discourse's foundations, tracing them to the watermark of liberalism: J.S. Mill's On Liberty. While it is the case that liberal theory is much more than Mill, my intention with this project was to focus on the most coherent aspects of the free speech discourse and this coherence is located in Mill. Indeed, key modern liberal theorists such as Rawls or Nussbaum are working within the problematic determined by Mill. (Nussbaum has been pretty open about this influence but Rawls, because he saw his ethics more in line with Kant, was less inclined to admit this fact.) More importantly, the main first world defenders of free speech and expression (i.e. the ACLU) regurgitate Millsian logic. My intention, then, was simply to focus on the discursive roots of the contemporary narrative of free speech, and these roots are Millsian through and through. But if any readers are interested in looking for radical critiques of liberalism as a whole, I would suggest Domenico Losurdo's Liberalism: a counter-history and Jeff Noonan's Democratic Society and Human Needs as primers for the development of liberal philosophy and ideology. 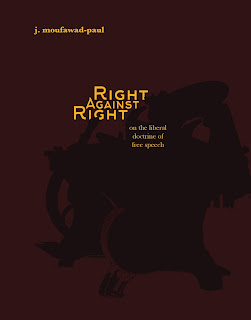 Maybe some day this will be published as a tiny book and this cover will be used. One can only hope. Or maybe I'm just too taken by the colour scheme and the fact I spent hours making it to realize that it's shit. Oh well… But the quality of this cover is less important than the content I'm serializing. Without further ado, here's the next chapter of Right Against Right: